COLOMBO — With its spectacular green coloration and reddish eyes set behind a knob-like snout, the hump-nosed lizard (Lyriocephalus scutatus) is probably Sri Lanka’s most charismatic reptile. But that beauty comes at a cost: the hump-nosed is regularly targeted by smugglers for the illegal trade in exotic pets.

The hump-nosed is an agamid, or iguanian, lizard, a family that includes more than 300 species. Sri Lanka is home to 23 of these species, 20 of which are found nowhere else on Earth — including L. scutatus. Prior to 1993, Sri Lanka allowed the legal export of wild-caught agamid lizards, but banned the trade with the passage of the country’s Fauna and Flora Protection Ordinance.

In August, Sri Lanka had the opportunity to boost protection for several agamid species by calling for a complete international ban on their trade, at a global wildlife trade summit.

Instead, the country pulled back at the last minute, amending some of its proposals to water down the protections it was seeking and even withdrawing one proposal covering two endemic agamids.

Pressured to pull back?

Going into the 18th Conference of Parties (CoP18) to the Convention on International Trade in Endangered Species (CITES), which took place in Geneva in August, Sri Lanka had proposed increased trade protections for 10 agamid species.

But at the conference itself, Sri Lanka made amendments at the last moment, moving to list the hump-nosed lizard, rough-nosed horned lizard (Ceratophora aspera) and rhino-horned lizard (Ceratophora stoddartii) in CITES Appendix II, which allows for international trade under stringent conditions. Sri Lanka also withdrew the proposal seeking protection for garden lizards.

Sevvandi Jayakody, the coordinator of the CITES CoP18 Sri Lankan Secretariat, said the reason for withdrawing that proposal was because of technical reasons arising from the recent taxonomic “splitting” of species, prompting the need to revise it to also include “look-alike” species.

In the case of the watered-down proposals, Jayakody told Mongabay that “insufficient data” had prompted the move to seek to list the species in Appendix II rather than Appendix I.

But there is growing concern among conservationists that the European Union exerted pressure to compel Sri Lanka to amend its proposals and withdraw one.

According to the summary records of CITES CoP18, the EU argued that the hump-nosed lizard did not appear to meet the criteria for inclusion in Appendix I.

However, CITES follows the “precautionary principle,” which requires that, in cases of uncertainty, countries must act in the best interests of conservation of the species in question when considering proposals for listing in Appendices I and II.

Sandra Altherr of Pro Wildlife, a conservation charity based in Germany, said the EU had repeatedly undermined efforts by range countries such as Sri Lanka to better protect their species against being smuggled into the EU market. In the report “Stolen Wildlife: Why the EU needs to tackle smuggling of nationally protected species,” Altherr notes that rare and attractive species are advertised for sale online in Europe.

Samantha Gunasekera, a former head of the country’s customs office, told Mongabay that reports indicate some of Sri Lanka’s most exotic lizards have been smuggled abroad in the past decade, with Europe being a key market.

Herpetologist Ruchira Somaweera of CISRO, Australia’s federal science and research agency, said there was enough evidence to suggest illegal smuggling of threatened endemic lizards out of the country. Crucially, he added, there was no clear evidence that these specimens were being bred in captivity.

The agamid lizards proposed by Sri Lanka for Appendix II listing would be subject to a so-called zero export quota, which means that wild-caught animals cannot be traded, but captive-bred ones can, under a permit system. Allowing this, experts say, could result in traders forging certificates for wild-caught animals to pass them off as captive-bred specimens.

A May 2019 report by the Monitor Conservation Research Society and published by wildlife trade monitoring NGO TRAFFIC highlights the presence of protected reptiles from Sri Lanka in the international commercial trade. Report authors Jordi Janssen and Anslem de Silva note that while the majority (58 percent) of the Sri Lankan lizards in the market are identified as having been bred in captivity, many of the specimens on sale are adults rather than juveniles — indicating they were likely caught from the wild.

Janssen and De Silva’s survey of pet markets revealed sudden spikes of Sri Lankan lizards into the European markets. The report says this could be due to smuggling operations that increased the available stock. The report also says that smugglers target egg-bearing female lizards; the rationale is that, soon after capture, the female will lay the eggs and they will hatch, thus bearing baby lizards that are, technically at least, born in captivity.

The report calls on EU authorities to check whether the parental stock of “captive-bred” specimens were obtained illegally, and to verify the validity of captive-breeding claims and cross-check with authorities in the range state. It also highlights the need to introduce a foolproof assessment system in permits to identify the origin of each specimen.

These recommendations, made before the CITES summit, have now become timely as traders may seek to exploit the loopholes in order to trade the newly listed Appendix II agamids by fraudulently labeling them as captive-bred. 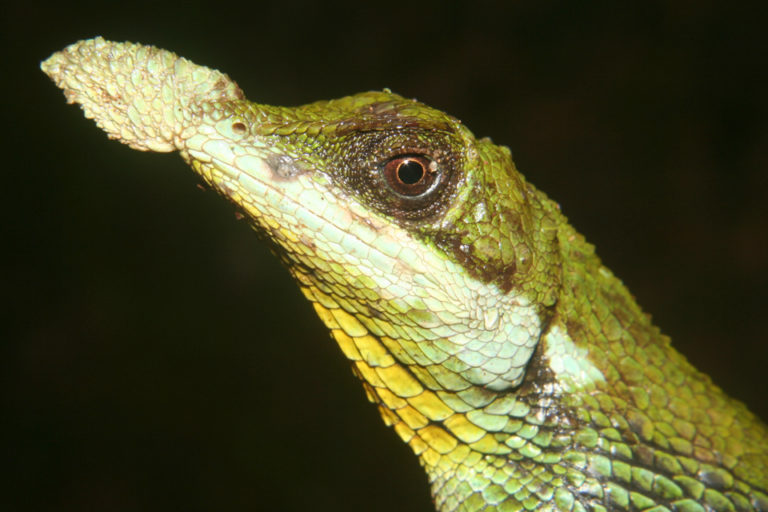 The leaf-nosed lizard (Ceratophora tennentii) from Knuckles has a leaf-like appendage on its nose and is nationally recognized as critically endangered, like many other Ceratophora lizards. Image courtesy of Ruchira Somaweera.

Sri Lanka’s National Red List identifies five agamid lizards as critically endangered, five others as endangered, two as near-threatened and one as vulnerable.

But the current version of the list was made in 2012, and a planned update that was due two years ago still hasn’t been made. Similarly, the conservation status of Sri Lanka’s snakes and lizards has also not been updated on the global red list. Several Sri Lankan experts along with an expert group of global reviewers and assessors of the red list met to discuss the issue in Sri Lanka in September.

De Silva, the main local organizer of the workshop and considered the “father of modern herpetology” in Sri Lanka, told Mongabay that they found the threat levels for many species had increased, mainly due to habitat loss and degradation. Some of these lizards that were common in home gardens and hedges of villages are also subject to increased predation by birds and monkeys. De Silva said these changes would be reflected in heightened threat levels in the next version of the National Red List.