This land is ours: New law could end age-old injustice faced by Liberian women (commentary)

Commentary by Alexandra Benjamin on 17 September 2019

Lofa County, Liberia – Ten women are gathered in the open-air concrete slab building that serves as a community center for Gbonyea, a village a few kilometers from Liberia’s border with Guinea and a five-hour drive from the capital, Monrovia.

Loretta Althea Pope Kai, the charismatic program director for local NGO the Foundation for Community Initiatives (FCI), asks the women a series of questions, each one focused on whether they own land. Virtually none of them do.

For around two hours, the women outline the challenges they face, and Pope Kai carefully steers them through their rights. As the meeting draws to a close, the group breaks into an impassioned rallying call: “We want land. We want land…”

Lofa County has vast swaths of fertile land, including rich, dense forest, and it was considered Liberia’s breadbasket before the country’s 14-year civil war, which affected this area more severely than any other in terms of population displacement and the destruction of infrastructure. Lofa was also the first county to be hit by the Ebola virus outbreak in March 2014.

Yet, long pre-dating these profound traumas is an injustice that has shaped the lives of women here, and across Liberia, for generations: the denial of their land rights. The reality of this becomes vividly clear straight after the meeting.

Along with three sisters who were among those in attendance, Pope Kai and I take a short drive, followed by a ten-minute hike through trails that cut through the thickets of lush forest around Gbonyea. We stop at a clearing and one of the sisters, Rita Massquio, explains: “This is our father’s land that was taken away from us.”

After their father died, the land should have passed to their brother under customary law, but he was too unwell to look after it. Now, according to Massquio, the community is denying the sisters their land, and a local landlord’s son has planted rubber on it. “We don’t have nobody that can help us so that we can get our land back,” she says.

The sisters’ story was echoed a number of times in interviews conducted with the women of Gbonyea. I heard of a mother driven off her land by her brother; of a woman who is precariously sustaining her family on land she doesn’t own; of a daughter forced, along with her mother, off their land by her late father’s wife.

Pope Kai is all too familiar with such tales. “Land is power, and men love power,” she says. “Although women are the primary users of forests, it is men who have always made the decisions about them.”

The 2003 Inheritance Law defined some land rights for married women (granting them just a third of their husband’s property after death), but women in Liberia still have no land rights outside of inheritance. Unmarried women are not able to own land privately or collectively.

In practice, this means that unmarried women — who represent 62 percent of Liberian women — can’t own land or have their own house. This often leaves them having to squat with their families. These women are often unpaid laborers within their families, having to tend to the land and take care of relatives at the same time — yet they can’t own or make decisions about the very land they stand on.

“In rural communities, women are seen as properties because when they marry, the husband pays a dowry, which means they buy the woman from their family and the woman becomes the husband’s possession. As properties themselves, the wives cannot own a property,” explains Pope Kai.

Liberia may have elected Africa’s first female head of state in Ellen Sirleaf Johnson, but evidence is everywhere of the barriers that women face. Agriculture and forestry are cornerstones of Liberia’s economy, generating around 40 percent of its Gross Domestic Product. Despite 80 percent of agricultural workers and a fifth of forestry laborers being women, they have little control over the land.

This mirrors women’s position in society more generally: In 2018, the United Nations Development Programme (UNDP) ranked Liberia 155th out of 160 countries on gender equality, based on reproductive health, empowerment, and economic activity. It would be a mistake, however, to see women’s predicament in Liberia as an aberration: according to studies, nearly half of the world’s smallholder farmers are women, yet they own less than 20 percent of the world’s land.

Growing up in Monrovia with two brothers, Pope Kai was acutely aware of gender disparities. In a nation where only 27 percent of women are literate compared to 60 percent of men, she says she was lucky that her parents were able to support and encourage her education: “Most of my [female] peers were not able to complete their schooling, because their parents either didn’t have the finances or didn’t support them. Because of this I grew up with a passion to mentor other young women and advocate for their rights.”

Today, as Program Director at FCI, which is based in Monrovia, Pope Kai is doing just this.

Her work focuses on increasing women’s confidence and their ability to participate in decision-making processes. A key aspect of this is educating women (as well as men and younger people) on the law — and in particular the Land Rights Act, which President George Weah signed in September 2018.

The Act, which is the first Liberian law to recognize women’s rights to land, is one of Africa’s most advanced land rights laws.

Under it, women are defined as part of their community, and are able to participate in how land is managed and run. Land can now be owned privately, jointly, and collectively by management bodies, and all women, married or not.

It’s not hyperbole to say that it has the potential to fundamentally alter Liberian women’s life prospects and create a more just power balance between the country’s men and women.
“This is a big step towards equality, but having the law is nothing if it isn’t implemented properly,” says Kai Pope.

If its potential is realized, then all Liberians will benefit.

A 2011 report by the United Nations’ Food and Agricultural Organization outlined the wider gains that closing the gender gap in agriculture can bring, stating: “If women in rural areas had the same access to land, technology, financial services, education and markets as men, agricultural production could be increased and the number of hungry people reduced by 100-150 million.”

The women of Gbonyea are only too willing to play their part in transforming their own society. 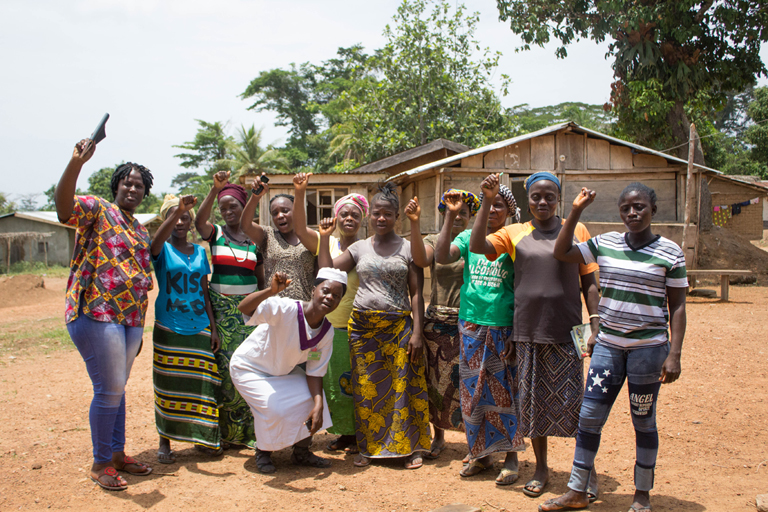 Alexandra Benjamin is a Forest Governance Campaigner at the forests and rights NGO Fern. This article is from Fern’s forthcoming report, Our Forests, Our Lives, featuring articles on forest governance from tropical forested countries.