The search for survivors in a post-nuclear reefscape

by Greg Asner and Clare LeDuff on 10 September 2018

On the morning of March 1, 1954, the United States tested its largest thermonuclear bomb over Bikini Atoll in the Marshall Islands. Code-named “Castle Bravo”, the explosion was more than 1,000 times more powerful than the Hiroshima and Nagasaki bombs that had ended World War II a decade earlier.

The Castle Bravo test surprised its engineers, yielding twice as much power as had been predicted, and a massive fireball that destroyed three neighboring islands and contaminated 18,000 square kilometers (7,000 square miles) of ocean with radioactive fallout to the east of Bikini. Directly in the path of the Castle Bravo fallout was Rongelap Atoll, where radioactive debris up to 2.5 centimeters (1 inch) deep was deposited on the atoll’s small islands and extensive coral reefs. The tragic impact of the nuclear fallout on the people of Rongelap is well documented, involving hundreds of deaths from radiation poisoning and cancer, and lingering health effects that plagued several generations of survivors. The Rongelapese were eventually evacuated south to Kwajalein Atoll, but the damage to their community and the surrounding environment was devastating and could not be undone. 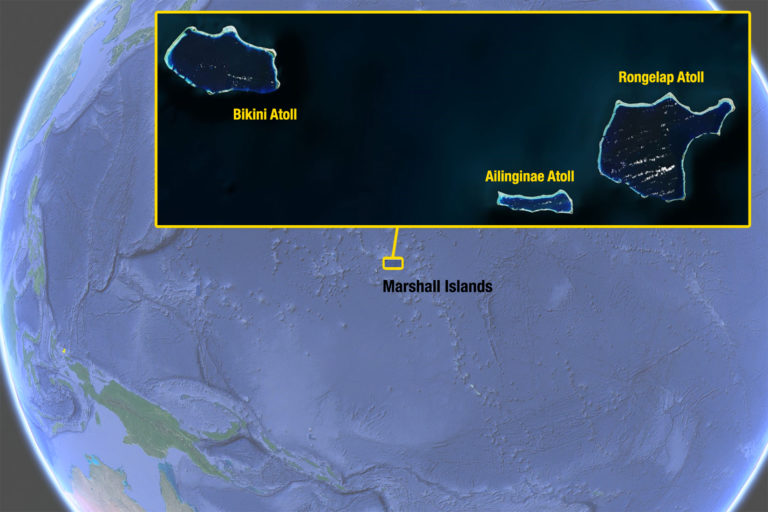 Visiting Rongelap Atoll is no quick day trip. Few ships run that far north in the Marshall Islands, and doing so requires open-ocean transits fraught with potentially rough seas. We entered the country via the U.S. Army’s base on Kwajalein Atoll, then boarded a trawler converted for remote diving operations for the long ride north. We arrived on the outer edge of Rongelap as the sunrise cast light on iridescent green vegetation and white sand beaches. We saw neither boats nor even a single aircraft contrail during the entire 10-day trip. The utter remoteness of the region had come into sharp focus for our dive team.

Drone view of our dive trawler in waters of Rongelap Atoll. Image by Mark Hatter.

We made the trip to these remote atolls to assess the state of their seldom-visited coral reefs. Despite the idyllic island vegetation that follows more than 60 years of post-bomb protection, our first underwater surveys on the west side of Rongelap proved disappointing. Although the region’s reefs are not subjected to the typical pressures of fishing or coastal development, an ocean heatwave in 2014 had triggered a massive bleaching event that left the reef dominated by dead coral and algae. In our initial dives, we found ourselves searching across bleak reefscapes for signs of new coral growth to indicate some recovery in the past five years. Our search proved difficult.

On the third day, we put in on the far east side of Rongelap, along one of the small island reefs that line the atoll, just a few miles from the horrific scene of human suffering under nuclear fallout decades earlier. We slipped beneath the waves and worked our way from the outside of the atoll toward the interior lagoon. We again passed over an expanse of bleached reef, just as we had come to expect from previous dives. Crossing a high point in the undulating submarine terrain, we were surprised to finally lay eyes on a vast area of intact, healthy reef. As far as we could see, the area harbored thousands of thriving coral colonies and hundreds of species.

The newly discovered reef glistened in a kaleidoscope of color, generating smiles and fist-pumping among dive team members. Hundreds of reef sharks patrolled the area, following us as we surveyed, and an occasional manta ray glided by, effortlessly eyeing us as an unlikely species visiting their domain. Algal cover was very low on this pristine reef, and thousands of corals were meters in diameter, indicating their maturity and old age. As we made our way back to the ship, we wondered how and why this refuge occurred in this particular spot.

On our subsequent survey dives, we compared each reef to the pristine one that became known aboard ship as the “gold standard.” We discovered a second “gold” reef, as well as multiple “silver” sites containing moderate levels of biodiversity among living corals and fish inhabitants. Yet other reefs, where we found widespread dead coral, didn’t even earn “bronze” status, instead showing signs of heat stress and vacancies in what should have been enormous reef fish populations. Despite numerous dives, we were left with no discernable pattern or explanation for the distribution and location of the extremely variable conditions.

Finishing at Rongelap, we sailed west to Ailinginae Atoll, where the captain emphasized that, to his knowledge, no one had surveyed its reefs in decades, if ever. There too, we found a mix of reef conditions, from gold to silver and bronze, again highlighting the enormous variability that seems to occur nowadays, even on some of the most remote reefs in the world.

We left the Marshall Islands more resolute in our belief that no amount of diver-based surveying can generate the knowledge needed to know the status of coral reefs. New approaches, such as those employing satellites and aircraft in complementary ways, are needed to track the changing health of the world’s reefs. Nonetheless, our laborious yet limited field surveys did suggest that reefs can survive and recover from large-scale disturbance in the long run, even exposure to high levels of radiation. That alone is a promising realization from both biological and conservation standpoints.

Perhaps most importantly, our visit to the remote post-nuclear Marshall Islands highlights the immense challenge that coral reefs face in a warming ocean. Unlike the nuclear bomb tests of Bikini Atoll, which were followed by strict environmental protection, the current threat posed by climate change has yet to inspire a sufficiently proactive response. Sadly, climate change is driving our continued search for the increasingly rare “gold standard” coral reefs, as these refugia become isolated microcosms of what used to be commonplace throughout the world.

Climate change mitigation is paramount to coral reef survival, and that can only be achieved by dramatically reducing greenhouse gas emissions to our atmosphere. In the Marshall Islands, we were confronted by the hard truth that our distant activities have already and will continue to affect even the world’s most remote reefs. Until we make significant strides to reduce carbon dioxide and other greenhouse gases in the atmosphere, climate change will pose a dire, long-term threat to coral reefs, perhaps even more difficult to bounce back from than the effects of nuclear fallout.

This is the fourth part of the ongoing Reefscape series

About the authors and the Reefscape Project: Greg Asner is a senior staff scientist with the Carnegie Institution for Science. His scientific interests span the fields of ecology, conservation science, remote sensing and climate change. Clare LeDuff is the program manager of the Carnegie Airborne Observatory at the Carnegie Institution for Science. Her interests range from conservation biology to the effects of climate change on agricultural systems. The Reefscape Project is supported by the Leonardo DiCaprio Foundation, Avatar Alliance Foundation, and partnering organizations.