Photographer Suzi Eszterhas was working on a story in Costa Rica when she met sloth researcher Dr. Rebecca Cliffe for the first time. The pair spent weeks in the field together, as she says below, following a mother three-toed sloth and her tiny baby. Some days the pair spent hours lying on the forest floor, just staring up at the mother sloth, “hundreds of feet up in a tree. But other days she came down low to feed, and even crawled across the forest floor in front of us…presenting the most incredible photo opportunities.”

Incredible images were indeed the result. Another outcome was that during all that time spent sloth-watching, the photographer and sloth expert decided to publish a book meant to raise awareness and support for the species’ conservation. The result is a fantastic new book, “Sloths: Life in the slow lane,” and the pair discussed it with Mongabay recently.

Erik Hoffner for Mongabay: Why do we all seem to love sloths?

Rebecca Cliffe: Sloths are evolutionary oddballs. We are often led to believe that the most successful animals are those which are the fiercest, fastest or the most intelligent, yet [sloths] have managed to hang around for over 64 million years, making them one of the most ancient species of mammals, by basically doing nothing. As adults, the slow movement and eccentric biology combined with a permanent, enigmatic smile make them intriguingly weird, while baby sloths are cute enough to melt even the coldest of hearts. I think it is this combination of strange and adorable that has resulted in the soaring global popularity of sloths.

In terms of conservation, however, increased popularity does not equal increased protection. Sloths are being poached for tourist photo opportunities (‘sloth selfies’) and for the pet trade in massive numbers, and the rainforest is being degraded as more people travel to countries that [have] sloths. With only one baby every 4 years, and a 60% mortality rate in infant sloths, a slow rate of reproduction means that populations are now in rapid decline. This has a knock-on effect for the entire rainforest ecosystem, as sloths are key recyclers of nutrients, and represent a main prey species for many birds of prey (including the harpy eagle) and big cats (jaguars, ocelots and margays). If you take sloths out of the rainforest, everything else suffers as a consequence.

Mongabay: Sloth species range in conservation status from ‘critically endangered’ to ‘vulnerable’ and even ‘of least concern’ in some cases. Do you have a favorite species, and what’s its status?

Rebecca Cliffe: I am fascinated by all sloths, but as a biologist I think my preference probably lies with the Bradypus family. This group takes the sloth lifestyle to the extreme a little more – they have a slower metabolism, slower rate of digestion, slower movement, more specific diet, and they are still very poorly understood, as they do not survive well in captivity. Within this family I have worked mostly with the brown-throated sloths that are currently listed as ‘least concern,’ however I believe this is likely due to a lack of population data. There are no accurate population estimates for sloths as they are so difficult to observe in the wild, but based on numbers being admitted to rescue centers, populations are almost certainly in decline.

Mongabay: How did a sloth expert and a renowned wildlife photographer come together for this book project?

Suzi Eszterhas: I first met Rebecca while working on a sloth story in Costa Rica. She was working on her PhD at the time and we spent weeks in the field together, following a mother three-toed sloth and her tiny, two-week-old baby. Some days we spent hours lying on the forest floor, staring up at a small patch of the mother’s fur, barely visible, hundreds of feet up in a tree. But other days she came down low to feed, and even crawled across the forest floor in front of us, with her tiny baby clinging to her chest – presenting the most incredible photo opportunities.

During our days slogging through the jungle and laying on that muddy forest floor, Rebecca regaled me with fascinating information about the life of these mysterious animals. Her passion for sloths was contagious. And her quirky, hilarious personality was incredibly entertaining. We quickly became friends and hatched a plan to photograph sloths throughout Central and South America.

Mongabay: The book is packed with great images of sloths and also shares new science. Can you talk about something Mongabay readers may not yet know about sloth behavior or ecology that’s in there?

Rebecca Cliffe: The main message I wanted to get across with this book is to dispel the long-held notion that sloths are simple, lazy creatures that do little other than sleep all day. As we learn more about these animals through research, it is becoming apparent that their slow movement is in fact a deliberate and incredibly successful survival strategy. Rather than lazy, sloths are incredibly stealthy – so stealthy that they have fooled even the most eagle-eyed scientists for many decades. Throughout the book we explore this theory and present a new view of sloths that might be surprising to a lot of people.

Mongabay: OK, so ‘slothful’ is a misnomer, and rather than being lazy, sloths keep to a slow pace for strategic reasons. And while individuals in captivity may sleep most of the day, in nature, aren’t they much more active?

Rebecca Cliffe: Sloths in nature aren’t lazy at all, but they are certainly slow. While they only sleep between 8 to 10 hours per day – and I know many humans who sleep more than that – they move slowly for the rest of the time and split activity randomly throughout the day and night. All of this works as a survival strategy, as their predators do not identify slow moving things, and cannot predict at what time of day the sloths will be vulnerable. The only time sloths do manage to pick up a bit of speed – other than when they fall out of a tree – which happens an astonishing amount – is when they find themselves in water. This can be to cross a river or – in the case of the pygmy sloths – when they need to swim through the ocean that surrounds their island home. Sloths are entirely buoyant thanks to their oversized, gassy stomachs, and so a sloth in water can float along three times faster than it can move on the ground!

Mongabay: So Suzi, how did you manage to get the incredible images of sloths swimming?

Suzi Eszterhas: It took five days for me to get this shot. And yes, I did take it underwater by swimming with the sloth. There are a few wildlife experiences in my life that stand above the rest, and this is definitely one of them. Swimming with this sloth was a magical, intimate encounter that rivals experiences I have had sitting with mountain gorillas and floating with humpback whales. This career is a great privilege.

Mongabay: What are the main conservation challenges faced by sloths?

Rebecca Cliffe: Sloths are the ultimate creatures of habit, which means that they cannot adapt to the quickly changing modern world. They are not physically able to jump across gaps in the canopy as a monkey might, so they heavily depend on continuous rainforest in order to move from tree to tree. Unfortunately, the sloths’ remaining habitat is becoming more and more disturbed. Roads, farms, towns and cities now dominate the landscape, cutting the once continuous forest into smaller and more isolated segments. This is forcing sloths to descend to the ground where they become incredibly vulnerable. All over Central and South America sloths are being hit by cars, attacked by dogs, electrocuted on power lines, and poached for the pet trade. As if this isn’t enough, they are also now facing the problems of inbreeding as sloth populations are becoming isolated due to habitat fragmentation. The only way forward is to promote education, protect the remaining forest and work to connect the fragmented forests with canopy bridges and natural corridors.

Mongabay: What do you hope the book will achieve and change in the world?

Suzi Eszterhas: As the photographer, it is my hope that the images in this book will give people a glimpse into the life of these incredibly mysterious creatures. I hope that by seeing their beauty and vulnerability, readers will feel compelled to do something to help protect sloths from deforestation and other threats they face. The Sloth Conservation Foundation is the world’s only organization with the mission to conserve sloths in the wild and I am immensely proud that our book is helping to raise funds for their programs.

Rebecca Cliffe: I hope this book will help to change the perception of sloths away from the lazy stereotype that they have been plagued with for centuries. To instill a sense of admiration and intrigue about these animals is the only way that people will feel inspired to join us in the battle to save the worlds slowest mammal! Proceeds from the sale of this book are going directly towards supporting the work of the Sloth Conservation Foundation, a registered non-profit organization that is working to protect sloths in the wild. More information about our sloth conservation efforts and ways in which you can get involved can be found on our website, slothconservation.com.

Dr. Rebecca Cliffe is a British zoologist, a leading authority on sloths, and the founder and executive director of the Sloth Conservation Foundation.

Suzi Eszterhas is an award-winning wildlife photographer best known for her work documenting newborn animals and family life in the wild.  Her photographs have been published in over 100 magazine cover and feature stories. Suzi has sixteen books in print with another four in progress. 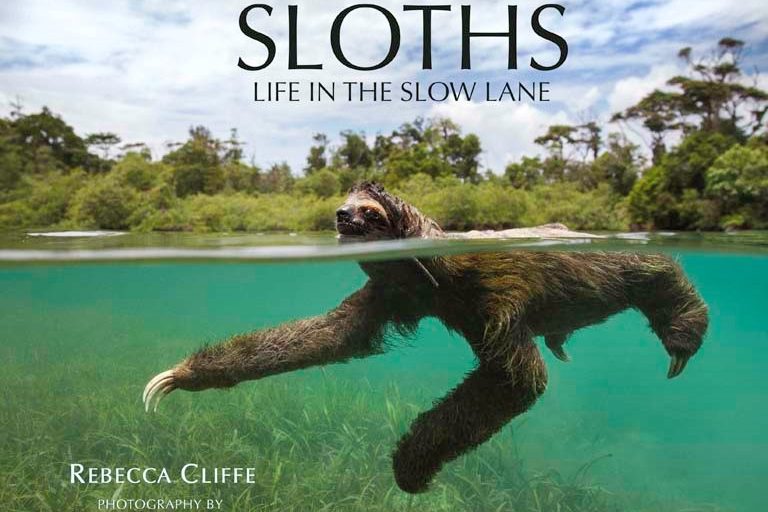