Deforestation drops 16% in the Brazilian Amazon

Deforestation in the world’s largest rainforest declined over the past year, reports the Brazilian government.

According to preliminary data from Brazil’s national space agency INPE, deforestation in the Brazilian Amazon amounted to 6,624 square kilometers (2,558 square miles) between August, 1 2016 and July 31, 2017. The loss is equivalent to 112 Manhattans or half the U.S. state of Maryland, but is 16 percent lower than the prior year period when 7,893 square kilometers were chopped down. 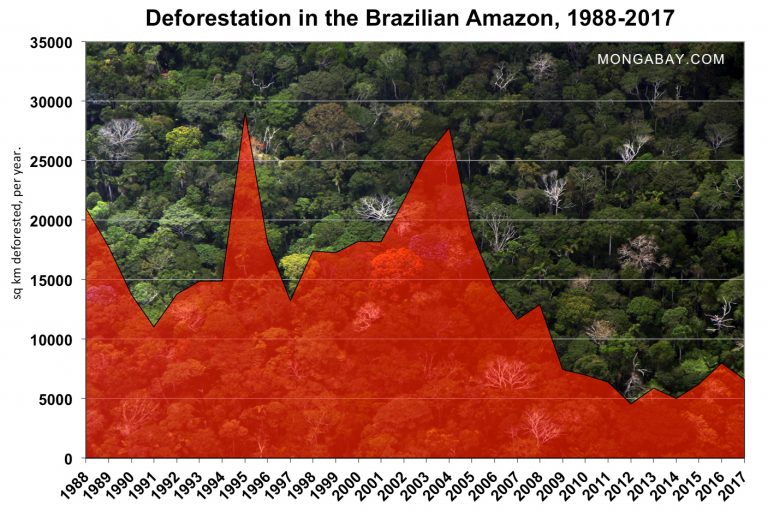 The decline in deforestation was not unexpected. Near-term tracking data from both the Brazilian government and the NGO Imazon showed markedly lower rates of loss on a month by month basis over the past year. But the trend isn’t expected to continue into 2018 given the current drought over large expanses of the Brazilian Amazon, which has contributed to a record number of rural fires in September 2017. Dry conditions in the Brazilian Amazon are typically associated with higher rates of forest loss as farmers, ranchers, and speculators set forests degraded by logging and scrublands ablaze to clear land for crop and pasture.

An additional threat to the Brazilian Amazon comes in the form of a political push to weaken environmental laws. Since Michel Temer ascended to the presidency following the impeachment of Dilma Rousseff in May 2016, he has worked with the so-called “ruralista” block in Congress to strip protections from conservation areas, expand mining and infrastructure projects, and loosen regulations on land use.

Nonetheless the recent rate of forest loss in the Brazilian Amazon remains well below historic levels. Deforestation in the region peaked from the 1980s through the mid-2000s and is presently about 75 percent off 2004’s near-record level of 27,772 square kilometers.

The data released by INPE is preliminary. Brazil typically releases the “final” assessment in late November or early December once detailed analysis is complete. Occasionally the data is further revised the following year.

INPE’s data is based on Landsat satellite images and detects deforestation in areas greater than 6.25 hectares. That means some small-scale deforestation may evade detection by the system, but the year-end data is still much more precise than the monthly alert-based systems which have a resolution of 25 hectares. In recent years, some landowners have started avoiding detection by the alert system by clearing small patches of forest.

The Brazilian Amazon is the world’s largest rainforest. Nearly two-thirds of the Amazon rainforest lies within the borders of Brazil.