Figures from the Brazilian government’s INPE (National Institute of Space Research) show that 2017 is shaping up to be the worst year on record for forest fires: 208,278 were detected by 5 October. Alberto Setzer, who runs INPE’s fire monitoring department, told Mongabay that 2017 was now on course to overtake 2004, until now the year with the most fires, when 270,295 were detected. More fires were seen in September of this year (110,736) than in any previous month in the 20 years that INPE has been recording fires.

Two rural districts in Pará state had the highest number of fires in the Amazon biome: 9,786 in São Félix do Xingu and 6,153 in Altamira up to the end of last month. The increase of fires in the whole of Pará has been astonishing: INPE figures show that there were 24,949 just in September, a six-fold increase compared with 3,944 recorded in the same month last year. In fact, 29,316 fires were recorded in all of last year for the Amazonian state.

While there is a high level of drought this year, it is clear that something other than dry conditions is driving the record number of wildfires. Setzer told Mongabay that the fires almost everywhere have a common characteristic: they are manmade.

INPE, which has a sophisticated system for monitoring fires, has built up an impressive archive of satellite images of the damage done by the fires. This archive shows that the wildfires have increasingly been spreading into protected forests. Over fifty conserved areas have been impacted this year, almost twice the number damaged last year. And the list includes some of Brazil’s iconic nature parks.

Araguaia National Park is a highly important protected area on the island of Bananal in southwest Tocantins state. Covering 558,000 hectares (1.4 million acres), it is home to threatened species like the giant otter and jaguar, and stands out as an oasis in the midst of the parched savanna vegetation of the Cerrado that surrounds it. Earlier this month one of Brazil’s leading TV shows, the Fantástico programme on Globo TV, showed powerful images of the national park being devoured in flames. In all, 70 percent of it was destroyed.

Out-of-control fires have affected cattle ranches as well. In the region of Carmolândia in the north of Tocantins a fierce fire raced across eight farms, killing over a thousand cattle. Almost everywhere, fire brigades have been too poorly staffed and equipped to control the blazes.

Setzer explained that when much of the vegetation is dry — the result of a prolonged drought, as happened this year — wildfires can rapidly race out of control. “In some areas of the center-west of Brazil, there hasn’t been a drop of rain for four months.”

However, he added, his analysis was based on past oceanic conditions which could still change, with the 2017 drought getting worse: “This happened in 2015 when the drought intensified from October till December, but this is not usual in the Amazon.”

What seems to be occurring, he said, is that the Amazonian climate is changing — what was once regarded as an exceptional drought there, is now becoming more accepted as normal. “The dry seasons in Brazil seem to be becoming drier and more frequent,” explained Aragão, just as forecast by climate modelling, and as observed by scientists.

The fact that there has been a record number of fires this year doesn’t necessarily mean that there has been an increase in the area deforested. Instead, fires are often the result of a different phenomenon: forest degradation, which occurs when loggers move in to extract hard timber.

Loggers only fell valuable trees they’re harvesting and those in the way. But what they leave behind under the forest canopy are heaps of dead limbs and debris — dry, flammable slash. However, that degraded understory left by loggers rarely appears in official deforestation figures, which only report on clear cuts, defined as deforested areas over 62,000 square meters (15 acres).

Antonio Donato Nobre, a visiting researcher at INPE, calls this hidden damage the Big Green Lie: “This wholesale forest degradation is not monitored and it affects massive areas, many times larger than those clear-felled in deforestation. Such degraded forests are very vulnerable to drought and fires. Indeed, it is the main reason why the fires spread so easily”.

For many decades scientists assumed major fires were unlikely in wet places like the Amazon, so scientific knowledge regarding tropical wildfire dynamics is still lacking. Ted Feldpausch, an expert in tropical ecology at Exeter University, UK, told Mongabay: “Understanding of how tropical forests change due to fire is still quite limited. This is partly due to fire being variable, burning downed trees in deforested areas and also entering standing forests, where fire movement and impact may be more cryptic, e.g. ranging from slow-moving fires that creep across the forest floor consuming litter, to high energy fires that arch through canopies and consume whole trees. This variation in fire can result in a large range of impacts on tree mortality, carbon storage in living and dead trees, and forest structure and composition.”

Lack of political will

Both Setzer and Nobre believe that, at heart, the failure to bring forest degradation and deforestation under control in Brazil is a lack of political will by federal and state governments. Setzer said: “It requires extreme political tolerance (to use a politically correct term) to allow 700,000 square kilometers [270,271 square miles] to be illegally cleared — and to know where this is happening in real time — without doing anything.”

Nobre is more outspoken: “The very agents of wanton destruction of the Amazon are now controlling the legislative and executive branches of the federal government and working day and night to increase deforestation and degradation via bills and acts that are being tolerated by the judiciary.”

Nobre believes that time is fast running out for saving the Amazon rainforest: “I was alarmed about the future of the Amazon years ago, in 2009, when there was still a good chance that we could stave off final destruction. In 2014, I published an accessible review of the scientific literature that showed that the unabated process of destruction in the Amazon was leading to disaster.

“Now I hear from colleagues studying forest degradation, on the front line and remotely, that multiple organ failure is underway in [the forests of] eastern Amazonia — that the forest is already collapsing in areas not directly affected by chain saws and bulldozers… Unless a very different government comes to power in 2019, it will be too late for huge areas of the Amazon,” he said, referring to next year’s Brazilian election.

This is how the world ends…

This year’s record wildfires are not only having Amazonian impacts. It is becoming increasingly clear to researchers that the fate of the Amazon’s forests is inextricably bound to the fate of the world — and vice versa.

While in the past Amazonian forests served humankind inadvertently by absorbing more carbon than emitted, delaying the worst impacts of global warming, Feldpausch says that has now changed. The Amazon has now become part of the problem: “The combined effect of continued droughts, fire, and forest degradation is reducing carbon stocks, resulting in Amazon forests being an estimated net source of carbon during the past decade.” Studies have found that a shutdown of the Amazon carbon sink can occur in severe drought years.

Indeed, a new, just published study by researchers at the Woods Hole Research Center and Boston University, has found that human-caused deforestation, forest degradation and disturbance of tropical forests in Africa, the Americas and Asia have resulted in those forests now emitting more carbon into the atmosphere than they sequester on an annual basis.

More alarming still, some scientists believe that the speed at which Amazonian forests are being devoured by wildfire, plus the greenhouse gas emissions from those fires, will only aggravate global warming.

In truth, the very survival of the Amazon may depend on humanity’s rapid success in radically reducing its release of greenhouse gases planet-wide. Bruno Lopes, a Ph.D student at the Federal University of Viçosa, spells this out: A recently published scientific study, to which he contributed, created a model demonstrating how the collapse of the Amazon forest might occur. If the world continues on its present track, he told Mongabay: “More severe droughts are going to make the soil drier and make the trees lose their leaves and branches. This combustible material… will accumulate in the soil and make the forest more vulnerable to high intensity fires.”

Change, he says, will not be slow, gradual or continuous. Instead, “If we follow present trends and we move toward a 4 degrees Celsius [7.2 degrees Fahrenheit] increase in global temperature by the end of the century, forest degradation will probably increase abruptly by the middle of the century.” The accumulation of combustible material may trigger mega-fires that, in the intensity suggested by their model of 600 kW/m, [a measure of the amount of fuel contained within a source] will be lethal to most trees.

The intensity of the resulting Amazon mega-fires will depend in large part on the quantity of greenhouse gases in the atmosphere, he explained. “If the Paris Agreement is implemented and the increase in global temperatures is held to 2 degrees Celsius [3.6 degrees Fahrenheit], this will reduce the intensity of the fires by 68 percent.”

Unfortunately for the Amazon and humankind, current cumulative national commitments to carbon cuts under the Paris Agreement will undoubtedly result in an overshoot of the 2 degree Celsius limit — with near certain catastrophic results. This circumstance led climate scientist James Hansen to angrily label the Paris Agreement a fraud and a fake.

More than ever, the destiny of the world is interdependent on all humanity. If Brazil is to have a chance at controlling the intensity of fires in the Amazon, it needs all countries — including the U.S. — to successfully reduce carbon emissions. And if the world is to avoid disastrous global warming, it needs Brazil, sooner rather than later, to tackle and reduce forest degradation and deforestation that, if uncurbed, could create runaway mega-fires, greatly increasing carbon emissions. The clock is ticking. The fires are burning. 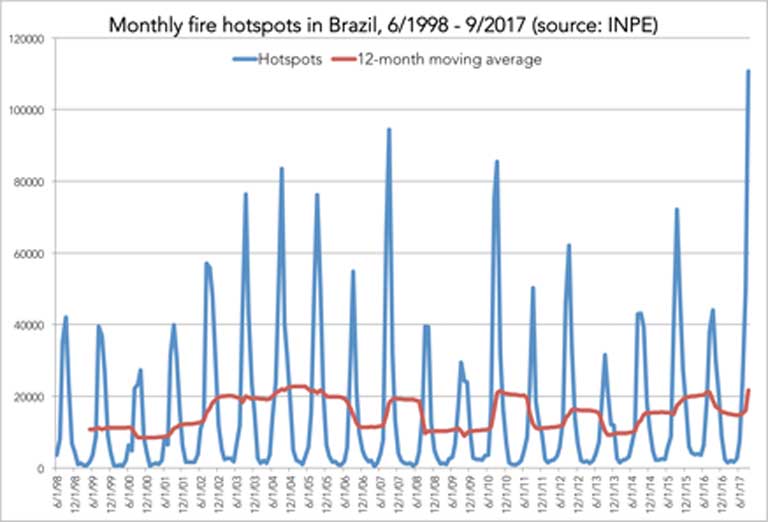