Should we be optimistic about the future of the earth? (commentary)

My wife and I attended the presidential inauguration in January. Of course, I thought I knew who was going to be elected. But, my wife reminds me often that my best guesses sometimes are wide of the mark! David Barron, Chairman of the ICCF Group, had read my book, “Running with Rhinos: Stories from a Radical Conservationist” and so, prior to the election, last fall had invited us to attend the ICCF Gala. That’s the International Conservation Caucus Foundation, a long-winded title for a group supporting congressional members interested in wildlife conservation overseas.

Having worked on wildlife in Africa and coral reef assessments in the Indo-Pacific Ocean, I figured it was an opportunity to meet some interesting folks.

The ICCF Gala held the night before the inauguration was in fact a hoot. It was a black tie event, but David Barron wore safari khakis. Bo Derek was there among other Hollywood stars. We sat with the Portuguese Ambassador. I ran into folks I’d worked with in East Africa. Top brass from Volkswagen, USA were celebrating the donation of 19 four-wheel drive vehicles for South Africa’s rhino protection programs. 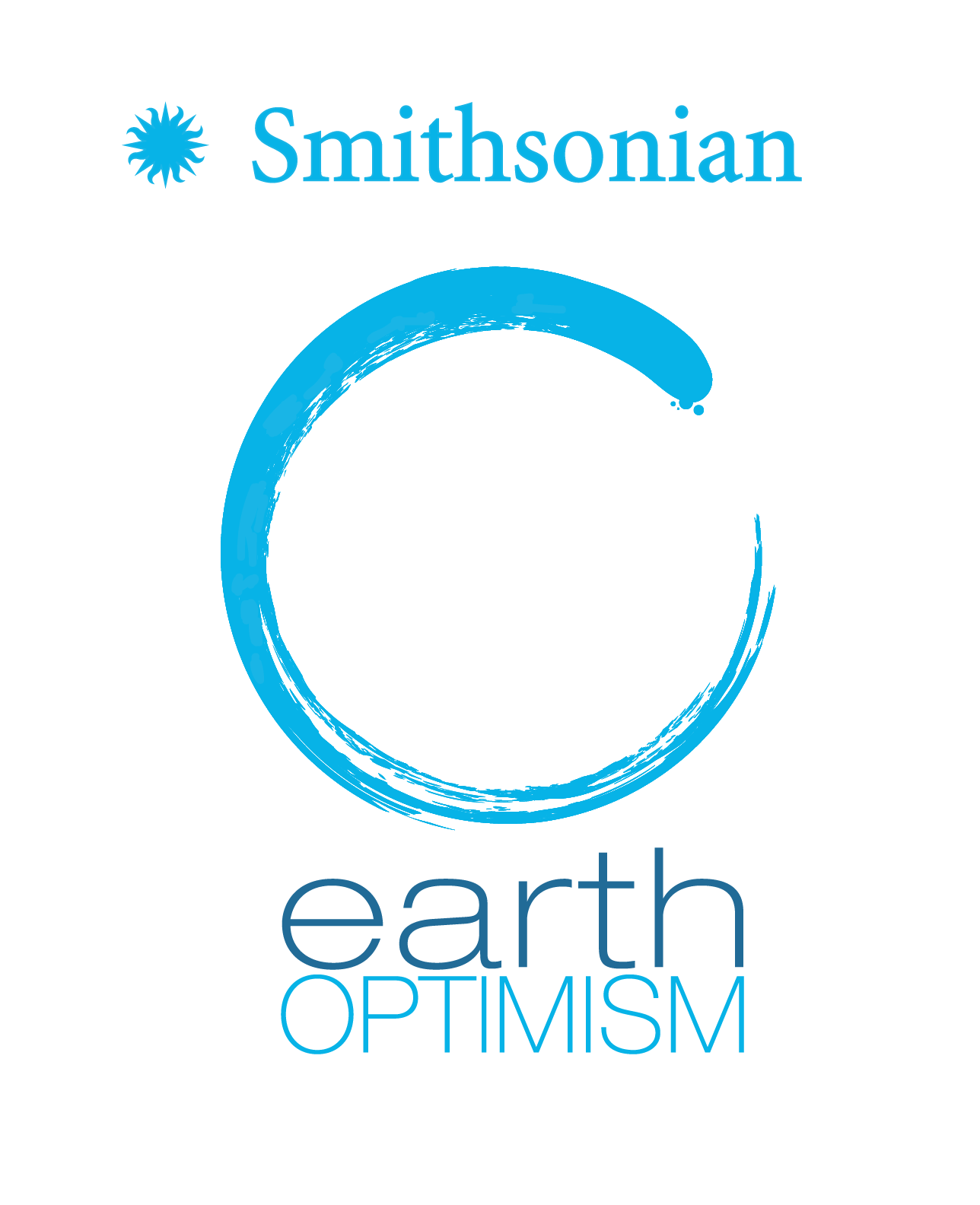 Following the Inauguration, we had breakfast with an old friend, Kirk Johnson, the Sant Director of the Smithsonian National Museum of Natural History. Kirk mentioned a Summit the Smithsonian was going to hold in April, surprisingly titled the Earth Optimism Summit. I’m a risk-taker and natural-born optimist, so working in conservation the last 17 years has sometimes been a drag. It seems like most environmentalists are beyond pessimistic. The movement is full of gloom and doom. They act like we should all fall on our swords.

I managed to weasel my way into a couple of spots at the Summit, a panel on the “Philanthropy Roundtable” session and a Judge at the “Make for the Planet” contest, where contestants are given 48 hours to come up with some wild-assed solution to an intractable problem from nature. Right up my alley!

By the third day of the Summit, I had come up with two new sayings describing my experience (I’m a storyteller and public speaker. I want to be a stand-up comedian for my third career, but my wife tells me to ‘keep your day job’. Rather rude, considering I’m retired. Anyway, I’m always looking for new material.)

My first Great New Insight had to do with the Summit’s location at the Ronald Reagan Building. “This building,” I said to anyone who would listen, “is a human maze designed by rats.” Catchy, huh? If that didn’t get someone’s attention, my second comment about the Summit would be, “I never did drugs growing up. This must be what it feels like to be stoned for three days.” I was beyond happy.

How come? Well, I’ve been working in conservation using the Aldo Leopold land ethic. Unlike the old environmental movement, we were bringing stakeholders together to solve conservation problems. The old paradigm was about people and business being the enemies of the environment. So, the approach was to pass laws, regulate, and then “sue the bastards” (a quote from Fred Krupp, Environmental Defense Fund). I was convinced that cooperative and collaborative processes would help solve conservation problems better and faster than suing people.

My talk at the Philanthropy Roundtable session focused on an example: The Cooperative Sagebrush Initiative. In 2005, we mobilized all the stakeholders, including businesses like natural gas companies, ranchers, communities, scientists, state and federal agencies, all to work together and fund experimental approaches to improve and restore habitat for the greater sage grouse, a ground-nesting bird whose original range was about 200 million acres of the American West.

A lawsuit had been filed to get the grouse listed under the Endangered Species Act, which could wreck the economy of the American West. We developed Ecosystem Services Payments (for private land conservation), offsite mitigation payments (under the National Environmental Policy Act regulations), and protection for private landowners who were willing to allow the reintroduction and stewardship of the greater sage grouse using “Safe Harbor” and “Candidate Conservation Agreements with Assurances” (CCAAs) – all revolutionary approaches to conservation. The projects were designed to get conservation going on private and public lands and protect property rights of landowners at the same time.

After a three-year period of experimental projects, the federal agencies co-opted our voluntary efforts and threatened anyone who wanted to work with us. For example, mitigation funds negotiated by the Bureau of Land Management were often not used for their stated purpose, i.e. environmental mitigation in the development area. At Jonah Gas Field, the BLM demanded $28 million and used $19 million to build themselves new offices in Pinedale, Wyoming. When gas drillers demanded the mitigation funds be used for offsite species conservation, they were threatened by the BLM to the effect that they would not get their development plans approved if they worked with us.

After my talk, I was bombarded by Summit participants who wanted to tell me their own tales of successful collaborative conservation. Here I was, at a meeting where about 1,500 participants were talking a language that included the concepts of working together, of developing and passing on successes that could be used by other groups. Talk after talk was about positive approaches to problems that the public, informed by a national media (whose business model is ‘disasters sell advertising’), thought were impossible to solve.

So here’s what I learned at the Smithsonian Summit: we are not going extinct. We have the capacity to solve, through changes in behavior and technology, the current negative impacts humanity is having on the Earth. Each of us needs to do our part. Get out there and volunteer. Support conservation locally while you think globally. Invest in new technologies. Have heart, but at the same time, use your brains.