Pressure over water in Brazil puts pulp industry in the spotlight

CORREGO GRANDE RESERVE, Brazil – Brazil’s southeast coastal state of Espírito Santo is rapidly heading toward desertification. In just a few decades, the region has gone from being one of the last refuges for the seriously threatened Atlantic Forest, to having 36 percent of its territory officially considered susceptible to desertification, according to Brazil’s Ministry of Environment.

The government has long been aware of the issue, but potential solutions are complex. A 2004 report by Brazil’s Ministry of Environment noted the desertification process in the northern part of Espírito Santo. The report pointed to the displacement of native forests by eucalyptus plantations for the pulp industry as a major driver. However, little has been done since then.

“[Desertification] is a growing problem,” said Geraldo Fereguetti, president of the Society of Agronomist Engineers of Espírito Santo, by email. “But except for isolated actions by some producers and associations, nothing is being done to tackle it.”

Of the 11 Brazilian states affected by desertification mentioned in the report, Espírito Santo is the only one that still hasn’t elaborated on a State Action Desertification Plan. The aim of these plans is to identify the specific problems of each region and articulate appropriate responses to tackle them.

“The north of Espírito Santo was a land of plenty, rich in Atlantic Forest, full of trees and mighty rivers,” said Daniela Meirelles, a spokesperson for Brazilian non-profit FASE. Her organization works with local communities to tackle problems that come with the exploitation and use of natural resources.

Meirelles believes that a large part of the problem stems from the growth of monoculture plantations.

“Since the eucalyptus monocultures arrived, the rivers have dried and the region has become semi-arid,” Meirelles said. The plants were introduced to the region more than fifty years ago.

Today, Brazil is the leading global producer of eucalyptus-derived cellulose, according to a January 2017 report by the Department of Research and Economic Studies of Brazil’s Bradesco Bank. The region’s climate and soil conditions, coupled with the use of selected eucalyptus clones, also makes Brazilian cellulose production one of the most competitive and efficient in the world.

According to the report, the production of 1.5 million tons of pulp requires 720,000 hectares in Scandinavia and 300,000 hectares in China, but only 140,000 hectares in Brazil. In addition, the trees are suitable for harvest after only seven years, roughly half as long as in Europe.

Because of these prime conditions, pulp operations are widespread in the region. According to the Brazilian Institute of Geography and Statistics (IBGE), today there are more than 280,000 hectares of eucalyptus plantations in Espírito Santo – about 6 percent of the total area of the state. The proportion is generally much higher in the north of the state, where most plantations are located. The state’s municipality of Conceição da Barra, for example, had 38,037 hectares of eucalyptus plantations back in 2010, almost 32 percent of its territory.

With the advancement of desertification, Espírito Santo faces extreme circumstances in regards to water. CESAN, the company that provides water to most of the cities of the state, described the situation in 2015 as “the worst water crisis in the history of Espírito Santo.”

Only a handful of cities have recently experienced an “emergency state” due to lack of water according to local media reports, most of them in the northern region. Rain has been meager, and rivers are running dry, but the current rainy season has helped to ease the pressure. Locals said in recent interviews that in some places their tap water has become salty, possibly due to seawater flowing upstream into rivers because of low water levels.

But regional expert Fereguetti says there is a difference between the lack of rain and the water crisis, even though the former might be compounding the latter.

“The lack of rain is a cyclic phenomenon which has been observed since the [1930s], when the first measurements were performed,” Fereguetti said. “On the other hand, the water crisis is a consequence of a deficient management, both by the public authorities and the users.”

Desertification has heavily impacted regional agriculture. Espírito Santo’s Department of Agriculture estimated in September 2016 that the accumulated economic losses in agriculture during the last two years reached more than $1 billion. Coffee, fruits and vegetables were the crops most heavily affected.

Critics argue that the pulp industry is partially responsible for the lack of water that is helping to fuel the region’s desertification crisis.

The largest pulp company in Brazil, Espírito Santo-based pulp mill Fibria, reportedly uses 56 million gallons of water per day, according to the company’s 2015 sustainability report. The amount of consumption has been described by some local media outlets as comparable to that of the whole metropolitan region of Vitória, the capital and largest city in the state. The company has also said publicly they are worried that the water shortage could compromise its long-term viability.

“It’s this model of development, with monocultures, agro-business and oil and gas extraction, the one that produces the climate changes that in turn cause the water crisis,” Meirelles said.

From deforestation to desertification

The northern region of Espírito Santo has been heavily impacted by desertification. For miles, the landscape consists solely of large fields of eucalyptus monocultures, broken up by abandoned pastures with degraded soil. Many lakes have become dry hollows overtaken by weeds and plants. Farmers complain about poor harvests. Schools are often closed due to lack of water. 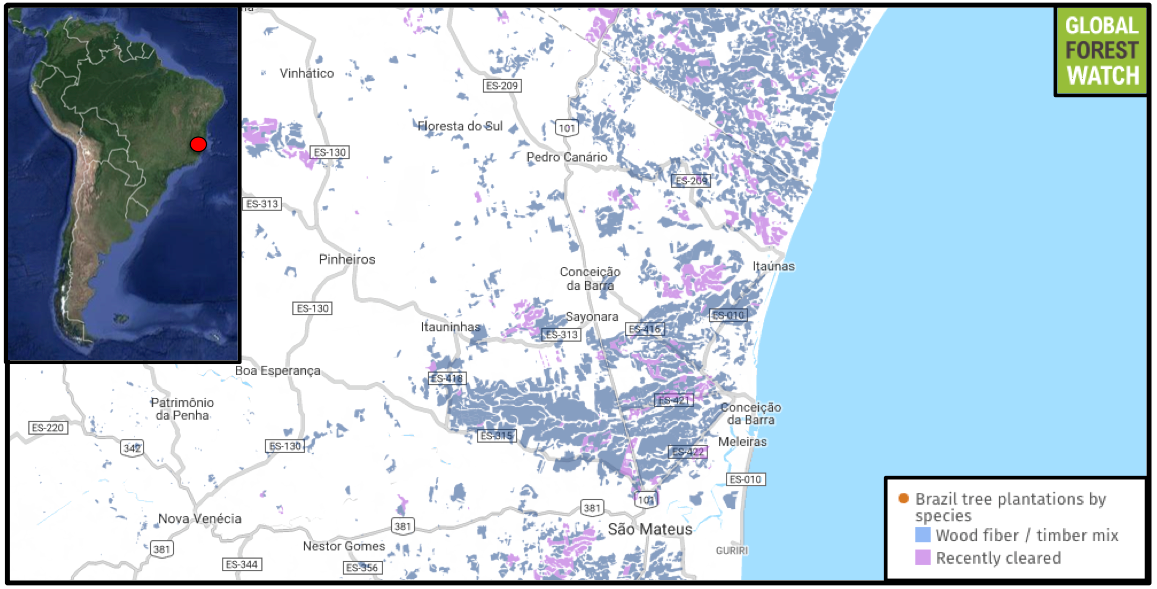 The problem goes back to the late 1960s, when the Brazilian government set in motion a program to stimulate the production of pulp. The program included fiscal incentives to reforest land with eucalyptus, as well as cheap loans to the pulp companies through the government’s National Development Bank.

Today, eucalyptus plantations are ubiquitous in the region. In many places, the monocultures begin only a few feet from houses.

However, less than a century ago, this was home to a vast extension of Atlantic Forest. According to Warren Dean, author of a classic book on the Brazilian Atlantic Forest, logging and the expansion of the coffee industry were the main historic drivers of deforestation in the area in the 1940s and 1950s. Later, after the wood supply was exhausted and coffee prices plunged, the region suffered from economic stagnation.

To Fereguetti, the deforestation of the Atlantic Forest plays an important role in today’s situation.

“The removal of the natural vegetation exposed the soil and impaired its capacity to infiltrate rainwater,” Fereguetti said. Soil infiltration facilitates rainwater to be accumulated in the water table and underground aquifers, making it available during dry seasons. “Today, without infiltration, the water flows directly into rivers and streams, causing massive floods followed by periods in which the rivers are completely dry.”

To Fereguetti, this low availability of water from rivers is “certainly one of the causes of the current drought” – and he adds that is was furthered by government policies.

“The previous forest codes completely ignored the issue [of desertification] and deforestation was bolstered by government policies that considered it a means of inducing development,” Fereguetti said. “They did not foresee the environmental consequences that today scare environmentalists, producers and government authorities.”

When eucalyptus is planted in degraded lands, the presence of trees can help retain water and protect the soil. However, their capacity to tackle desertification is rather limited compared to that of a native forest, according to the UN’s Food and Agriculture Organization.

Being industrial plantations, the raison d’être of monocultures is economic. Accordingly, the eucalyptus strains used have been selected for their fast growth, not for their ability to restore the land. Thus, similar to other fast-growing species, they require large amounts of water. And after converting it to biomass, the trees are harvested after only seven years.

Monocultures can also have a social impact.

In Espírito Santo’s north, the expansion of the pulp industry has created unforeseen complications. As the pulp companies acquired land for their monocultures, thousands of people were displaced, including many traditional communities. The Guarani and Tupiniquim indigenous tribes fought a 30-year legal battle to regain nearly 20,000 hectares of their land from Fibria. The expansion also affected many quilombos (hinterland communities of former slaves). Some of them are literally engulfed in eucalyptus, and experts say they are left with almost no land to plant with food crops.

“Most quilombos didn’t have the titles of their lands because until recently they lacked legal recognition,” FASE’s Meirelles said, explaining that the territories officially belonged to the government. “This made it easier for the companies to take their lands from them.”

Many simply left. The Sapê do Norte Quilombola Commission estimates that 90 percent of the people who lived there migrated to the outskirts of cities, according to local media.

Many of those who stayed still fight for land they believe is rightfully theirs. They had a small victory in 2013 when the Federal Ministry in São Mateus filed a civil suit against Fibria, accusing the company of illegally buying tracts of land through workers who later transferred them to the company. The prosecution is now demanding that the land be reverted to public ownership, and later titled to the quilombos once their traditional occupation is confirmed. The case still hasn’t been resolved.

Fibria did not respond to numerous requests for comment.

Despite the role of monocultures, Fereguetti does not believe eucalyptus plantations are solely to blame. Instead, he argues that the approximately 300,000 hectares of degraded pasture in the state should be the main target of “any program that aims at reducing the effects of the desertification process.”

A 2012 report about degraded soils by a local agribusiness organization CEDAGRO states that there are almost 400,000 hectares of degraded soil in the state, of which 238,943 hectares are located in degraded pasture.

Almost five years on, despite the problems experts are optimistic that the worst of the drought has passed. According to some forecasts, the current rainy season may provide enough rain to ease the situation. However, the potential for desertification and similar water crises will remain a concern for years to come.

Ignacio Amigo is a freelance journalist based in São Paulo, Brazil. You can find him on Twitter at @Sr_Tresillo.

[1] “With Broadax and Firebrand”, by Warren Dean (https://www.amazon.com/Broadax-Firebrand-Destruction-Brazilian-Centennial/dp/0520208862)