Yosemite National Park in California was officially designated in 1890, but the land was first protected in 1864 when President Abraham Lincoln signed an act of Congress transferring ownership of Yosemite Valley to the state of California with the stipulation that it “be held for public use, resort, and recreation… inalienable for all time.”

According to a study published this week in the journal Ecology and Society, Yosemite National Park was downsized twice and had five additions made between 1905 and 1937, resulting in a nearly 30 percent net reduction in the size of the park. At its inception, Yosemite comprised some 1,500 square miles (3,886 square kilometers), but today it covers just 505.5 square miles (1,309 square kilometers). 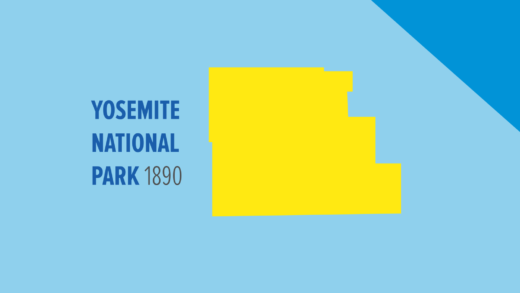 “Over a century ago, Yosemite was set aside to be protected in perpetuity. Since then, protection has been maintained for some of it but not for all,” Rachel Golden Kroner, a PhD candidate at George Mason University and lead author of the study, said in a statement. “The 100th anniversary of the National Park Service provides an opportunity to reflect on ‘America’s Best Idea.’ Recognizing the impermanence of national parks and other protected areas reminds us that we should not take these national treasures for granted.”

The changes to Yosemite’s original boundaries were primarily made in order to enable natural resource extraction, road building, and other human activities, the researchers note in the study. And Yosemite is not alone in having had policy changes chip away at its total area: PADDD has been documented worldwide. But, while it’s been found to lead to more forest fragmentation, its impacts on biodiversity and ecosystem services are still poorly understood.

Kroner and team compared protected, never-protected, and downsized lands to evaluate how much PADDD contributed to habitat fragmentation. They found that the history of Yosemite shows the importance of protected areas for conserving habitat — but that even protected areas have their limitations, which PADDD can exacerbate.

“Our study of Yosemite has demonstrated the negative ecological effects of PADDD, supporting the findings of previous studies that have quantified the benefits of [protected areas],” they write in the study. “Establishment of [protected areas] can foster ecological integrity by reducing rates of deforestation and habitat fragmentation. However, even large protected areas like Yosemite are not sufficient to preserve viable populations of carnivores, the conservation of which may be further compromised by PADDD.”

Still, the negative effects of PADDD were clear, the team determined — so it’s perhaps good news that the team also found that PADDD is reversible.

“In general, lands that were removed from protection, e.g., downsized, were more highly fragmented than protected lands and indistinguishable from never-protected lands,” Kroner and her co-authors write. “Lands where downsizes were reversed were less fragmented than lands where downsizes were not reversed. These results suggest that protected area downsizing may exacerbate habitat fragmentation, a key contributor to biodiversity loss globally.”

Changes to Yosemite’s boundaries that were made to allow for timber and mineral extraction had immediate ecological consequences, the researchers found. “As a result of boundary changes, some of the oldest trees nearby and expanses of wildlife habitat were lost or degraded,” they write in the study. “In 1908, the acting superintendent wrote that ‘Game seems to be gradually on the decrease’ as game had ‘grown fairly tame’ and became an easy target for hunters.”

Mike Mascia, a co-author of the study and senior director of social science at Conservation International’s Moore Center for Science, works with researchers from around the world to document PADDD and disseminate the results on the crowd-sourced website PADDDtracker.org.

Mascia stresses the importance of policies to prevent PADDD from resulting in the loss of habitat, natural heritage, and the ecosystem services provided by protected areas. The global rate of protected area downsizing is unclear, Mascia says, but what is clear is that parks around the world are currently facing many of the same challenges that Yosemite faced 100 years ago, especially resource extraction and road building.

Protected areas along the U.S.’s southern border, including Saguaro and Big Bend National Parks, for instance, may be downgraded to allow infrastructure construction for border security purposes. In Brazil, Iguaçu National Park and Dunas de Natal State Park were recently proposed to be downsized for highway construction, Emílio Einsfeld Filho Private Natural Heritage Reserve was proposed for downsizing for dam construction, and there is a proposal for Amapá State Forest to be degazetted altogether for industrial agriculture. Meanwhile, a proposed road in Tanzania’s Serengeti National Park is expected to affect wildebeest migration, increase public access, and accelerate poaching, per the study.

“As we look ahead to the future of national parks in the USA and around the world, the history of Yosemite demonstrates the critical importance of protection and the lasting legacy of when protection is lost,” Mascia said in a statement. “Environmental policies must account for the fact that we not only can create national parks, but we can also take them away—and when we do take away protection, there can be lasting consequences.”