Can nature thrive in cities? New book looks at changing face of nature in Bangalore

Humanity is migrating to cities. More than half of the world’s human population now lives in urban settlements, and by 2050, nearly 70 percent of people will live in cities, according to a report released by the United Nations in 2014. But is there space for nature in this rapidly urbanizing world?

I live in a sub-urban fringe of Bengaluru (formerly called Bangalore), India’s fourth largest city. I’ve seen the city transform drastically over the last six years, from a city of lakes and gardens to one that is congested with traffic and overflowing with garbage. Most of the city’s lakes have turned into sewage dumps, roads lie littered with mounting garbage heaps, and high-rise apartments and shiny malls have taken over open spaces that once teemed with fruit trees, birds, butterflies and insects. Yet, Bengaluru continues to hold on to patches of greenery and wetlands that are home to animals like Bonnet macaques, slender lorises, and a large diversity of birds and insects.

This tug-of war between nature and development isn’t Bengaluru’s story alone. Similar transformations are unfolding across most Indian cities, and possible other cities too. This makes it more important than ever to look into nature in our cities, and the increasingly important role natural areas play in influencing our access to clean water and air, food, recreation, cultural and spiritual needs, and relief from stress.

A new book titled Nature in the city: Bengaluru in the past, present and future, written by urban ecologist Harini Nagendra, does just that. Nagendra is currently a Professor of Sustainability at Azim Premji University in Bengaluru.

By digging into the city’s dynamic past, Nagendra provides a gripping narrative of how Bengaluru’s inhabitants have constantly molded and re-molded the city’s boundary and landscape over the past few centuries. Bengaluru hasn’t always been a pristine landscape of beautiful gardens and lakes, Nagendra illustrates in the book. In fact, the city has had a turbulent past with constantly changing boundaries and relationship with nature.

Understanding a city’s history is important, Nagendra says, because it helps us shed light on how nature thrived and failed in the past, how that compares with the present, and how that could shape the future of the city and its people.

The book takes its readers through the evolution and role of Bengaluru’s home gardens, public parks, village forests, sacred groves, and trees lining the city’s roads. Not only do these green spaces host diverse wildlife, Nagendra writes, they offer a number of vital functions. Bengaluru’s wooded streets, for example, have been shown to keep surface temperatures down, and reduce concentration of harmful pollutants in the air.

Nagendra’s book also delves into the changing face of Bengaluru’s rich network of lakes, many of which have been lost to urban development. However, instead of losing hope, the book cites examples of citizen-run initiatives that are saving many of the city’s wetlands and lakes from decay.

Nature in the city is a compelling look into a city’s relationship with nature, one that is likely to resonate with people from across the world.

Mongabay spoke with Harini Nagendra about her new book.

Mongabay: What inspired you to write a book about the state of nature in Bengaluru? How many years of research has gone into writing the book?

Harini Nagendra: The idea of writing a book for a wider public audience was something that I had in mind when beginning research on Bengaluru. My motivation for this research was to link it to practice, and what better way to do this than by communicating what we found to people, and stimulating discussion, via a book? Each research paper on Bengaluru has always been accompanied by an article for the public in a newspaper, sometimes two articles (in English and Kannada newspapers). The book was a natural extension of this: research publications and newspaper articles by their nature can only provide a fragmented view, whereas a book gives you space to provide a 360 degree landscape view. The book is based on 10 years of in depth research, and took a year to write.

Mongabay: Why is understanding a city’s history important to shaping the biodiversity of a city in the future?

Harini Nagendra: Cities, despite being dynamic, are deeply historical entities. The patterns you see of biodiversity in Bengaluru today are shaped by the biophysical setting of the city in a semi-arid landscape where water scarcity always looms on the horizon. The lakes (water reservoirs) that villages dug centuries and millennia ago, and the trees that were planted to green this semi-arid landscape in the 19th and 20th centuries, distinctly shape the current ecology of the city. The social structure that existed from colonial times, which led to the favoring of certain kinds of users such as the wealthy over the poor, and of certain kinds of ecosystem uses such as aesthetic and recreational over others such as livelihood and worship, continue today. Thus the signature of the past is very evident in the current city. We need to historicize the changes we observe today to understand why certain patterns are the way they are, and to see what we can do, if anything, to change these for better environmental protection and improved social justice. 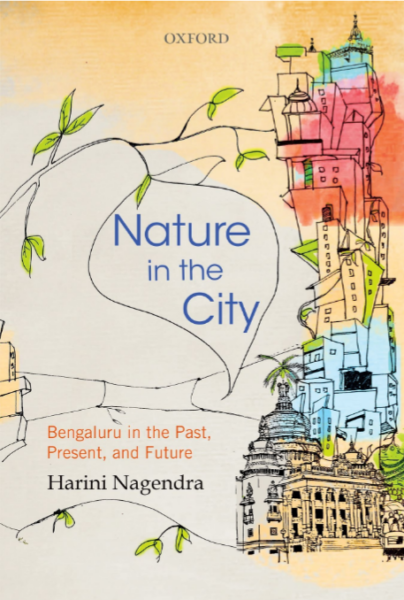 Mongabay: How difficult was it to re-create the history of Bangalore’s landscape?

Harini Nagendra: It has been quite a task! Archival material is available from the colonial period (18th century), but lies buried in a number of archives that are not easily accessible. Beyond that, we know little, and what information exists about Indian pre-colonial rulers is largely anecdotal and flows from myths and oral legends. Yet these are important to access as well, for while they may or may not be “fact”, they indicate something about the cultural fabric from which they emerge. I used maps, sketches and photographs that exist from the start of the colonial occupation of Bengaluru, in 1791, to get visual cues about the landscape. I also mined the inscriptional archives on stone and copper plates from the 6th century to the 16th century, when the medieval town of Bengaluru was created, to look at the locations that people selected in which to settle, the kind of physical landscape and wildlife that they encountered, the nature-centered livelihoods that they practiced, and the moral motivations that drove them to reshape the ecological character of the semi-arid landscape that they encountered, making it more hospitable for human habitation. I also used oral histories to supplement the written material that we encountered in the archives. One major gap has been the lack of subaltern material on the city. Oral histories provided one way to supplement these, but do not go far back in time. Written material in Kannada has been difficult to access as well, though I did manage to locate some writings after substantial searching.

Mongabay: Do you think your book will resonate with readers across the world?

Harini Nagendra: I do think so. When I wrote the book, I felt strongly that the story of Bengaluru is, in many ways, the story of every Indian city. Since writing it, during conversations with colleagues working on cities across the world, and in my own visits to some of these cities, I have seen so many parallels in the broad trends of change observed in the book, and in the way in which people connect to nature in urban environments. The story of Bengaluru has many parallels to the story of London, Chicago, Stockholm, Mexico City, Nairobi, or Taiwan: parallels that are often immediately (and excitedly) pointed out by residents of these cities.

Mongabay: What is the biggest lesson you learned while researching your book?

Harini Nagendra: The power of human action over the environment; and the power of the environment over people. The way in which settlers have reshaped the landscape around Bengaluru for millennia – converting a semi-arid rocky landscape with thorny bushes and no perennial source of water into a lush green and blue, fertile agricultural landscape and later into a modern bustling and thriving city – is really quite remarkable, when you think of it! But nature is not a passive entity to be reshaped at will, either. You can bend it, but not stretch it too far. The droughts, seasonal flooding, heat waves, air pollution and other impacts we are witnessing in recent years are a testament to the importance of nature in the city, and a counterpoint to the many voices who claim that nature needs only to be protected in distant forests and rural areas, and that there is no place for ecology in a fast growing city.

Mongabay: Some recent studies say that Bengaluru will become a an unlivable, dead city in the next five years. Your book highlights some citizen groups that are trying to save Bengaluru’s decaying lakes and green spaces. How hopeful are you of Bengaluru’s future?

Harini Nagendra: I am always hopeful. Partly because I am an optimist. But also because, if we give up hope, what do we have left? I met many incredible people and came across many inspiring stories of dedicated efforts that have achieved what we think to be the impossible: to restore degraded urban environments against immense pressure from builders, planners and other vested interests. Some of these are efforts by the wealthy and influential, others are by the marginalized. Somme succeed, others (perhaps many others) fail. Yet they keep on trying. If they don’t lose hope, I don’t think we should. And, I don’t think we can afford to, if we want our children and their children beyond them to grow up in a livable world, in a livable city.

Mongabay: Is there anything else that you would like to add?

Harini Nagendra: Cities are perhaps the one dominating new social-ecological system reshaping large swathes of the world today. We live in an era dominated by new and fast growing cities. Yet it is puzzling that we know so little about the ecology of cities, or of the way in which urbanization reshapes the connect between people and nature. My hope with writing Nature in the City is that it will soon join a larger body of literature on cities across the world, that can communicate outside the scientific community, directly to the people who live in cities. This, thankfully, is beginning to happen: I look forward to the day it takes full shape, when ecologists begin to look at cities as another, equally legitimate area of study (like forests or grasslands), and urban scholars, in turn, recognize that nature is part of the integral fabric of cities, and needs to be studied as such.