A supplier of palm oil giants Wilmar and Musim Mas has continued to bulldoze valuable forest in Indonesia’s Leuser Ecosystem despite its most prominent customers’ zero-deforestation commitments and repeated exposés of its activities, according to a new report from environmental group Greenomics-Indonesia.

Both Wilmar and Musim Mas have suspended their dealings with the company, Mopoli Raya, whose subsidiary Aloer Timur was still destroying high carbon stock (HCS) forest in Leuser as of June 24, according to photographic evidence provided in the report. Wilmar has urged the company to adopt a sustainability policy similar to its own. It has given Mopoli Raya three months to do so or face an indefinite termination of their relationship.

Yet for Greenomics as well as Musim Mas, and possibly also Wilmar, Mopoli Raya’s activities, which have gone on for months at least, call into question the efficacy of suspending purchases as a strategy for dealing with rogue growers. Greenomics wrote in its report suspensions are “apparently incapable of preventing this supplier from developing new oil palm plantations” in HCS and high conservation value (HCV) forests.

“Despite significant progress in working on suppliers that engage in deforestation,” Musim Mas said in a statement issued in response to the report, “a halt in purchasing does not seem to be a solution to provide real protection to the Leuser Ecosystem. Musim Mas is in discussion with the industry and its stakeholders to rethink on the solutions for forest conservation.”

Mopoli Raya employees who answered the phone at the company’s office on Wednesday and Friday this week said the field manager was not available for comment. 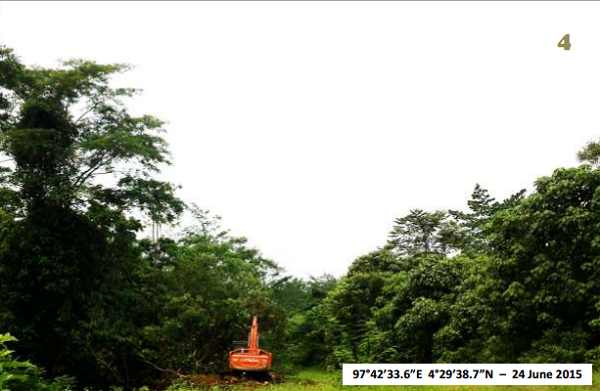 Although the five palm oil traders combined control somewhere between eight and nine tenths of the global market for processing fresh fruit bunches, their leverage over suppliers like Mopoli Raya is not necessarily definitive, IPOP executives say.

In Indonesia’s North Sumatra and Aceh provinces especially, there are a number of mills that aren’t bound by zero-deforestation commitments and thus provide a market for Mopoli Raya’s fresh fruit bunches despite the IPOP companies’ suspensions.

“Neither [Wilmar nor Musim Mas] has been able to come up with solutions that are capable of providing real protection to the Leuser Ecosystem,” Greenomics wrote in its report.

In Greenomics’ view, at the root of the problem is the IPOP companies’ failure to adequately monitor their suppliers and prevent deforestation from happening.

“Without continuous monitoring, implementation will be confined to the pages of IPOP press releases only,” Greenomics wrote in the report.

Wilmar acknowledged its monitoring could be improved and said it was looking into strengthening the process.

“We take this responsibility seriously, and this means engaging and supporting our suppliers with their challenging journey towards sustainability even if they are not immediately able to comply with the Group’s Policy for various reasons (depending on the nature of the gaps), so long as they demonstrate their willingness and commitment that are backed by actions,” a Wilmar spokesman said.

“Wilmar believes this is a more effective approach to helping the industry to transform, rather than taking the easy way out by immediately cutting off errant suppliers.”