This article is the second in a two-part series on Sierra del Divisor, a proposed national park in one of the most remote corners of the Peruvian Amazon that is experiencing deforestation as it waits for final approval from the government. Read the first part here.

A proposed national park in Peru sits on the apparent cusp of approval, even as it suffers deforestation at the hands of illegal loggers, miners and coca growers.

Encompassing a far-flung swath of Amazonian rainforest that’s home to a variety of strange and rare animals and plants, the Sierra del Divisor Reserved Zone also houses a unique volcanic mountain range, from which the protected area borrows its name. And indigenous groups, some of which have little or no contact with the outside world, also call the greater area home.

To protect these treasures, advocates say everything is in place for Peruvian President Ollanta Humala and his council of ministers to close out the process and finally declare the area a national park. As satellite imagery analysis from the Monitoring of the Andean Amazon Project (MAAP) has shown, the specter of deforestation, some of which has taken place in the past few months, looms large. 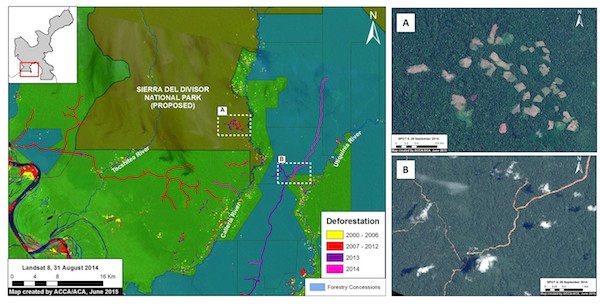 Enhanced view of the southwestern section of the proposed national park. Panels A and B are high resolution satellite images of the areas indicated on the main map on the left. Key data sources: MINAM, SERNANP, ACCA, Hansen/UMD/Google/USGS/NASA, USGS, SPOT 6. Photo courtesy of MAAP. Click to enlarge. 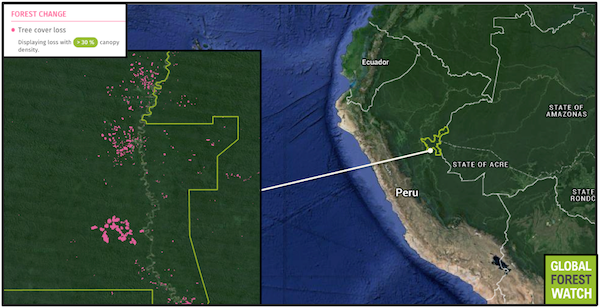 According to Global Forest Watch, the area detected by MAAP detailed above lost 172 hectares of forest cover from 2009 through 2013. Click to enlarge.

Not only does Sierra del Divisor “provide important environmental services to mitigate climate change,” said Pedro Tipula, a specialist with the NGO Instituto del Bien Comun, it also serves as a haven for biodiversity. He added, “This natural area is home to hundreds of unique geological formations and intact forests that give rise to major tributaries that feed one of the major rivers in the Amazon, the Ucayali River.”

First conceived in the 1990s, Sierra del Divisor National Park began to take shape as scientists studied the area more intensively in the early 2000s. In particular, it was a Rapid Biological Inventory (RBI), designed to take stock in a short amount of time of the life that a specific area supports, that brought into focus the breadth of species that a national park designation would protect.

Led by the Field Museum of Chicago, the 2005 RBI opened scientists’ eyes to the riches within the expanse. “One of the most remarkable features of the [Reserved Zone] is the high concentration of rare and range-restricted species,” write the authors. In less than three weeks, exhaustive study of key parts of Sierra del Divisor unveiled “several dozen species of plants, fishes and amphibians potentially new to science.” 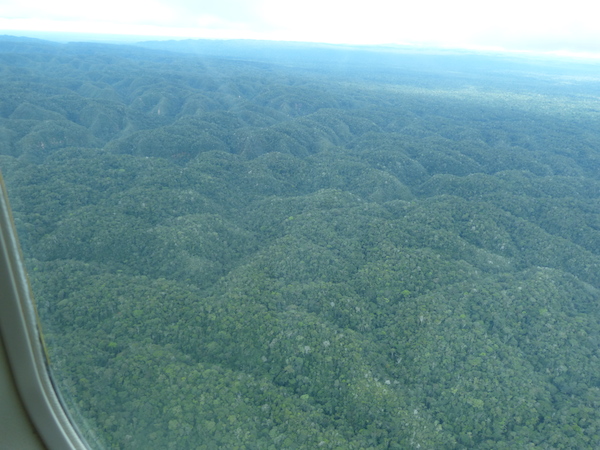 Sierra del Divisor is is a mountainous region, which is unique in the Amazon. Photo courtesy of CEDIA.

This section of remote Amazonian rainforest turned out to be something of a sanctuary for primates, as well as other rare mammals. The researchers spotted 13 types of monkeys and marmosets within its boundaries. One site called Tapiche held 12 different primates – “a remarkable species richness,” the authors write, even for the Amazon. All told, they cataloged 38 mammal species, more than half of which were listed as threatened.

In what the authors called their “most outstanding record,” they found a bird called the Acre antshrike that was previously thought to only live on a lone ridge in Brazil. In fact, the RBI revealed that the bulk of this species’ population actually lives in Peru.

Part of the reason for the proposed park’s role as a repository of little-known species is its unique geology. “Sierra del Divisor protects the only mountain chain in the lowlands of the Amazon rainforest,” said Lelis Rivera of the Center for Amazonian Indigenous Development (CEDIA). “This mountain chain goes from Peru to Brazil, and the Brazilian part has already been properly protected by a national park since the early 1990s.”

The range’s striking “cone peaks” and arcing sandstone ridges and plateaus that protrude from the relatively uniform surrounding forest also create unusual habitats, reported the RBI researchers. The ranges twist and block the effects of storms in this part of the Amazon, leading to stretches of damp forest side by side with dry scrubland.

The indigenous tribes that inhabit the area have their own name for the Sierra del Divisor range – “the Land of the Brave People,” according to the RBI report.

“We know very little about these people who still roam through these broken mountain ranges and across the border into Brazil,” said David Salisbury, a geographer at the University of Richmond in Virginia, in an interview with mongabay.com. Salisbury worked with the Field Museum in 2002 to develop a proposal for a national park, and he studied the region for his doctoral thesis at the University of Texas.

A meeting between CEDIA representatives and local community members in Alto Perillos. Photo courtesy of CEDIA.

Many, including the authors of the 2005 RBI, believe a national park would help protect indigenous ways of life. The southeastern portion of the Reserved Zone overlaps with the Isconahua Territorial Reserve, set aside by the government for indigenous communities. MAAP also documented deforestation related to logging camps and gold mining in this area.

The RBI’s completion in August 2005 helped catalyze the government’s official designation of the area as a Reserved Zone on April 11, 2006. While the Reserved Zone status is a temporary designation that does allow for potentially destructive activities such as oil exploration, it has afforded some degree of protection, said Salisbury, at least in principle. “It precludes the establishment of forestry concessions,” Salisbury said. “Activity should not be taking place within it.”

Scientists, NGOs, and government agencies have since followed up with studies, assessments, and consultations to build the case for a national park.

If the park is approved, Salisbury pointed out that it would be create an uninterrupted corridor directly adjacent to the Serra do Divisor National Park that already exists just across the border in Brazil. These cross-border areas of forest, also known as “peace parks,” can have a multiplier effect on the vigor of the park’s protections, he said.

“With the Amazon Borderlands, you’re talking about some of the most remote areas in the world where very little is known, and monitoring and oversight can be extremely costly and difficult,” he said.

He added that it often helps to have more sets of eyes on the area in question. “The potential to conserve biodiversity is greater where more area is protected and more stakeholders have an interest in the conservation.”

Lelis Rivera cautioned that Sierra del Divisor’s current status as a Reserved Zone means its protections are not set in stone. “It is better than having nothing at all, but being transitory, it can be modified in size and shape.” Or it could be opened up to commercial uses, such as oil exploration, he added. 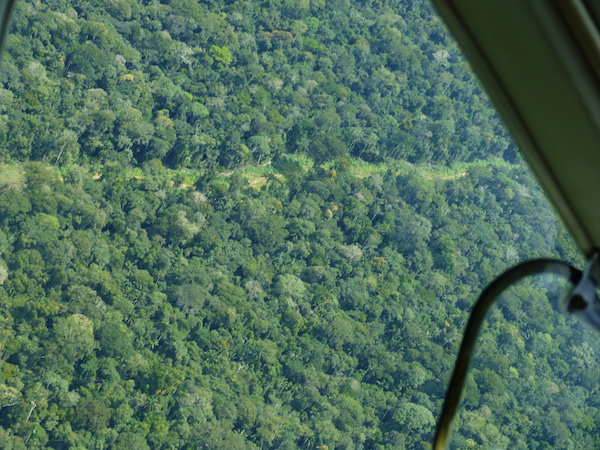 Indeed, Salisbury noted that the northern extent of Sierra del Divisor overlaps with areas earmarked for oil exploration. Presumably, becoming a national park should halt that threat, as national parks and territorial reserves are the two types of protected areas that do not allow oil exploration, Salisbury said.

Salisbury also sees the importance of science and research as a critical part of defending spaces like Sierra del Divisor. Satellite monitoring is certainly a part of that, he said. And he’s spent much of his career as a geographer flying over these remote banks of rainforest, speaking to the people who inhabit them, and studying the life that they brim with.

In fact, as he writes in his thesis, without that sort of knowledge, there is little hope of protecting “the great white spaces” on our maps: “Ultimately, the only clear winners in the confusion created by inadequate geographical information and overlapping claims are the illegal resource extractors and drug traffickers who can thrive in a confusing and poorly understood frontier.”