This article is the first in a two-part series on Sierra del Divisor, a proposed national park in one of the most remote corners of the Peruvian Amazon that is experiencing deforestation as it waits for final approval from the government. Read the second part here.

Satellite images less than a month old pinpoint deforestation, likely at the hands of illegal loggers and coca farmers, in the Sierra del Divisor Reserved Zone in Peru along the border with Brazil. As they have for nearly a decade, conservation groups are calling on the government to finally designate the area a permanent national park, providing all the protections that the label would bring and ending the transition from its temporary protected status.

The 1.47-million hectare Sierra del Divisor became a Reserved Zone in April 2006, and teems with biological, cultural, and geological diversity, including more than a dozen species of primates, uncontacted indigenous groups, and volcanic peaks unique to Amazonia. As a Reserved Zone, it’s protected from logging concessions, but the government agency that administers protected areas, known as SERNANP, doesn’t have the full resources for protection that it would for a national park. If realized, Sierra del Divisor National Park would be a bit smaller than the Reserved Zone, comprising 1.35 million hectares. 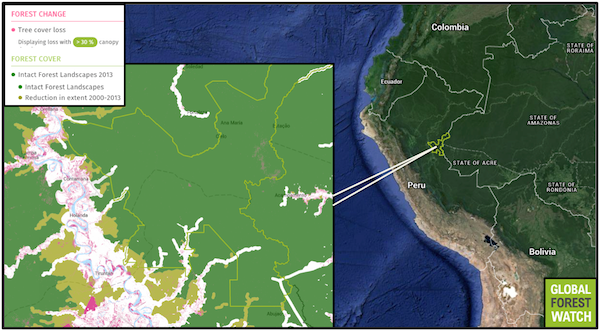 Sierra del Divisor Reserve Zone comprises more than a million hectares of intact forest landscapes (IFLs) – which are undisturbed tracts of forest large enough to retain its original biodiversity – along its eastern border with Brazil. However, Global Forest Watch shows the reserve lost approximately 2,300 hectares of tree cover from 2001 through 2013, and IFL degradation is apparent along its southern periphery. Proponents of upgrading its status to that of a national park say doing so will increase its protection. Click to enlarge.

In May of this year, technical staff in the Peruvian government signed off upgrading the zone. Now all that remains is for President Ollanta Humala and his Council of Ministers to grant final approval, according to Lelis Rivera of the Center for Amazonian Indigenous Development (CEDIA), a leader in the national park push for Sierra del Divisor.

One potential complicating issue is the proposed China-backed Trans-Amazonian Railway, which would run through Peru and Brazil to connect the Atlantic and Pacific Oceans. Though many officials see the increased trade it would bring as an economic boon to both countries, others warn it could open the doors to colonization by outsiders if it ran near the park, leading to surges in deforestation as settlers develop the area.

Even without the railroad, deforestation is still a looming concern. In June, ecologists Matt Finer of the Amazon Conservation Association and Sidney Novoa of the Association for the Conservation of the Amazon Basin, as part of the Monitoring of the Andean Amazon Project (MAAP), analyzed satellite images going back to 2013. They found new instances of deforestation and roads that have appeared since then, likely as a result of illegal logging, gold mining, and coca farming, in three different areas of the park. 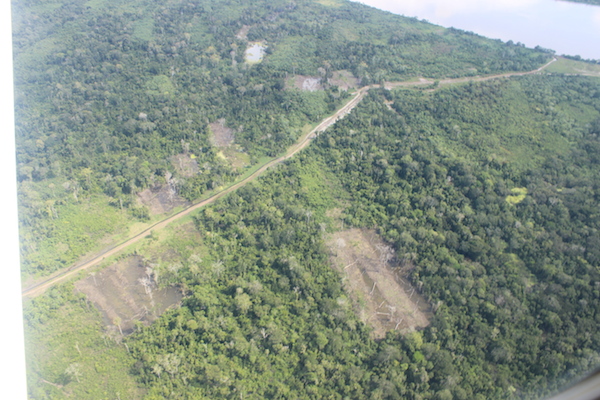 Deforestation in a set of more recent images first appeared in May 2015. Finer said the ultra-high resolution satellite images, in which objects as small as 38 centimeters can be distinguished, from the NextView program left little doubt about the destruction that’s occurring. They observed “this huge clearing” in the southeast of the proposed park, totaling about 13 hectares, he said. “I saw it with my eyes. We didn’t even need any high-tech software.”

By comparison, the workhorse of global satellite imaging, LANDSAT, in existence for decades, can distinguish objects to 30 meters of resolution.

To understand what’s happening in these areas, Finer took their discovery to experts to confirm what kinds of activities were responsible for the most recent clearing of this dense forest.

Rivera and his colleagues at CEDIA have carried out studies in the past several months looking at land tenure, property rights, and resource use in Sierra del Divisor. “This diagnosis showed that the main illegal activity in the area is deforestation for growing coca,” Rivera said. “Coca is normally produced far from the rivers (as in [the MAAP] image), and there are no settlements in that area to justify that deforestation for growing products for feeding a family or community.” 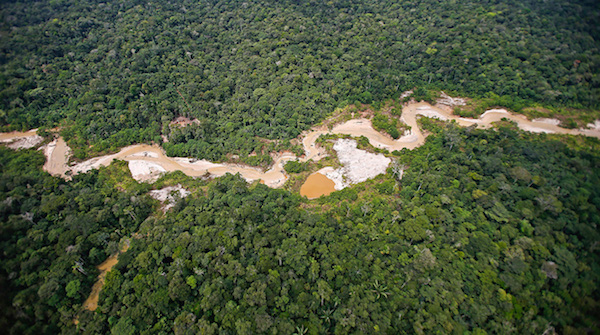 Illegal mining is also a problem near Sierra del Divisor. Photo of the Shesha River, courtesy of CEDIA.

Coca has been widely used as a stimulant in South America for millennia, though more recent techniques use coca to produce cocaine. Research has shown that coca cultivation drives deforestation in these remote areas, threatening not only rare and threatened plants and animals, but also the indigenous communities that live nearby.

David Salisbury is a geographer at the University of Richmond in Virginia. His doctoral research focused on Sierra del Divisor, and he has studied the Amazon Borderlands extensively, particularly along the border between Peru and Brazil. “There is no question that coca cultivation has a severe negative impact on the primary forests of remote areas such as the borderlands,” he wrote in his thesis. “These areas would likely still be forested if not for the world’s demand for coca derivatives.”

If Sierra del Divisor is designated a national park, SERNANP should be given the resources required to map out a strategy and better protect the park, Rivera told mongabay.com in an e-mail.

SERNANP said they flew over the area following the MAAP revelations to see the deforested areas for themselves. They also responded to the MAAP publications in June, writing, “Over the past few years, Sierra del Divisor has made significant efforts in its fight against ilegal (sic) logging and other activities that threaten it.” 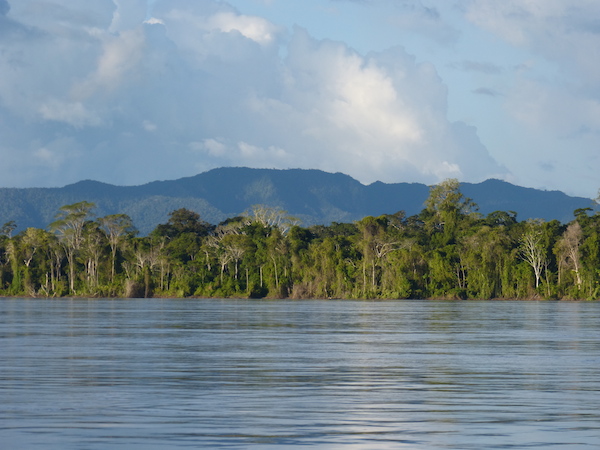 Others attest to the “good intentions” of the agency. “SERNANP is concerned about what is taking place in Sierra de Divisor,” said Pablo Tipula with the NGO Instituto del Bien Común, which encourages sound management of communal resources such as forests, water, and fisheries. “However, lack of staff [and] budget…prevent it from exercising its monitoring and protection role,” Tipula said, echoing Rivera’s assessment.

The struggle for the tools to keep forest standing is a constant in most conservation efforts. Now, the creation of the Sierra del Divisor National Park has the potential to be a major step toward the protecting this unique area – one that’s needed when you look at the Amazon as a whole, said Matt Finer.

He said, “In the Amazon, there’s just deforestation everywhere,” a fact he’s come to realize as he does deforestation analysis of satellite imagery. “These super-large, remote areas with minimal logging are increasingly rare.”