When attempts to protect and restore endangered species in their natural habitats prove futile, an alternate strategy for conservationists is to breed the species in captivity and reintroduce them to the wild. A recent paper published in Mongabay’s open-access journal, Tropical Conservation Science, found that reintroduced scarlet macaws were able to adapt to local food sources.

Researchers from the National Autonomous University of Mexico and the Pontifical Xavierian University in Columbia studied scarlet macaws (Ara macao) that were reintroduced to the tropical rain forests of Palenque, Mexico, in spring of 2014. Prior to reintroduction, the scarlet macaw had been absent from these forests for 70 years.

Once broadly distributed through Mesoamerica, the scarlet macaw’s range in Mexico has been reduced by 98 percent, thanks to poaching and hunting for the illegal pet trade, as well as habitat destruction. While the IUCN classifies the species as Least Concern, it acknowledges that its populations are steadily declining. The conservation status of the reintroduced subspecies, A. macao cyanoptera, is more urgent than that of the species as a whole, with the subspecies being completely wiped out in certain regions, as in Palenque. 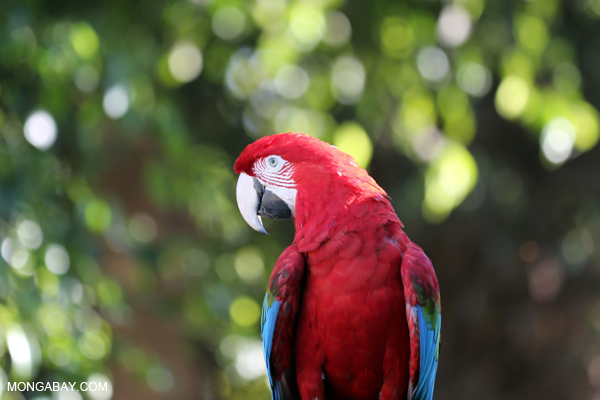 The reintroduction required the cooperation of three institutions: Aluxes Ecopark of Palenque provided the release site, Xcaret Ecopark bred the macaws, and the Institute of Biology of the National Autonomous University of Mexico planned and carried out the project.

After training the birds to eat wild food, project staff released 96 captive-born macaws into the forests of Palenque between April 2013 and June 2014. They released the birds in several batches throughout the spring, and observed that later batches were able to learn successful foraging techniques from those released earlier.

Until November 2014, the researchers monitored the birds’ success, walking trails throughout the release site five days per week. They observed that the released macaws made use of a broad variety of food sources and expanded their initial release range. Throughout the study, the macaws added several new trees to their diet each month. They came to use a total of 31 species of trees, not only as a food source, but also as a location for breeding and nesting. 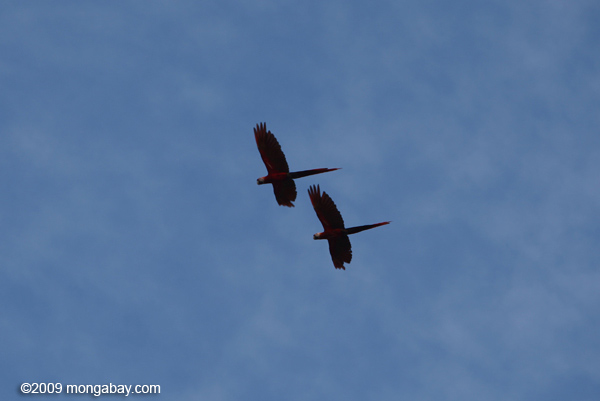 The success gives hope that scarlet macaws might someday be a more common sight in the forests of Palenque.