Minister flies over Kalimantan as forest fires surge in Indonesia 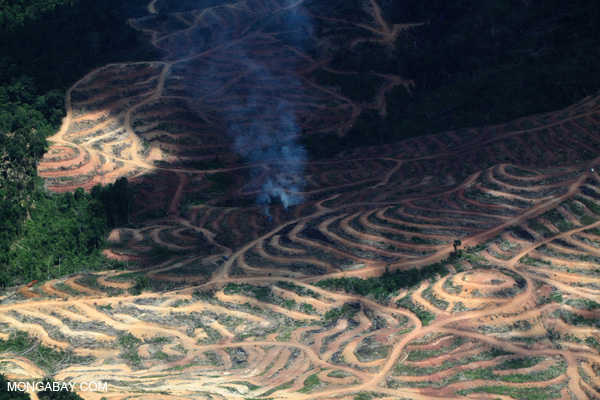 A fire burns on an oil palm plantation in Borneo. Photo: Rhett A. Butler

With dry season in full swing, Indonesia’s new environment and forestry minister flew in a helicopter over fire hotspots last week in West Kalimantan province, among those most affected by an annual burning event that each year blankets the region in choking haze.

The minister, Siti Nurbaya, was joined in the flyover by disaster mitigation and local government and police officials. After touching down, she urged them to better regulate the use of fire as a land-clearing device by small farmers, whom the law allows to burn in accordance with “local wisdom.”

“If 100 farmers use fire, 200 hectares will go up in flames,” she said. “This can be addressed with the issuance of a local regulation (perda).” From the air over Kubu Raya, Mepawah and Landak districts and the Pontianak municipal zone, Siti sighted a large number of mostly small hotspots. Many of these were situated near people’s houses, leading Siti to believe that residents had started them.

Some fires, though, were burning in or around company oil palm concessions, including one right to a palm oil refinery. Siti said her ministry would overlay those hotspots with concession maps and notify the companies as well as the relevant authorities.

“If companies allow fires to burn near their concessions, there will be criminal sanctions,” she said.

West Kalimantan Police Chief Arief Sulistyanto expressed a readiness to move against rogue companies. “We will immediately follow up on the minister’s data,” he said, noting the maximum penalty of 10 years behind bars and a Rp10 billion fine for illegal use of fire, which he hoped would deter potential lawbreakers. 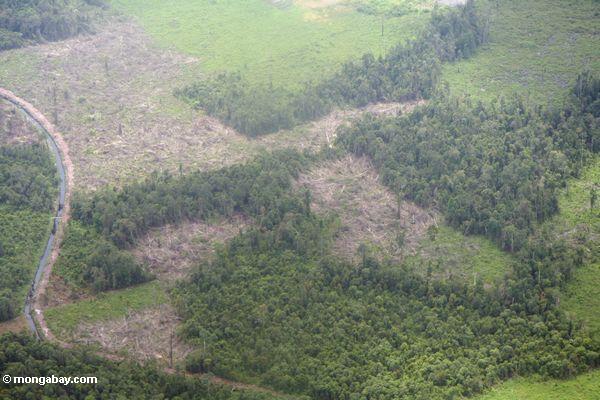 Aerial view of rainforest that has been slash-and-burned for agriculture in Kalimantan. Photo: Rhett A. Butler

West Kalimantan Deputy Governor Christiandy Sanjaya said that while the provincial government meant to promote alternative cultivation techniques – such as using trichoderma, a fungus, to replenish soil nutrients – the real challenge was getting people to change their ways.

“A variety of measures have been taken, but the fires still happen,” he said. “Everyone has to work together.”

Community Safety and Law and Order Control Units, known as Bhabinkamtibmas, would assist in monitoring hotspots around the province, said Sustyo Iriyono, chief of West Kalimantan’s Bureau of Natural Resources. They would be equipped with special applications, including SiPongi, the ministry’s new early fire-detection tool.