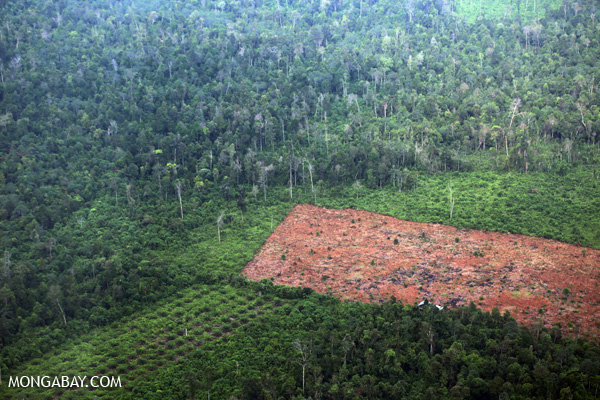 Palm oil giant First Resources has committed to eliminate deforestation and rights abuses from its supply chain, making it the industry’s first company operating primarily at the grower level to do so.

The policy, announced on Wednesday, is the latest in a wave of sustainability commitments from corporations that produce, trade and use palm oil.

First Resources had discussed the policy with a coalition of environmental groups, including Switzerland-headquartered The Forest Trust (TFT), whose founder, Scott Poynton, argues that companies must move beyond certification schemes for timber and agricultural commodities.

Singapore-listed First Resources has long been a member of the Roundtable on Sustainable Palm Oil (RSPO), an eco-certification initiative that requires its members to abide by certain social and environmental criteria when opening up new lands for plantations. But First Resources’ new policy marks the installment of more stringent standards than those to which the RSPO holds its members.

Where the RSPO does not ban all deforestation, for example, First Resources has prohibited the destruction of high carbon stock (HCS) forest. (The term, defined as containing more than 35 tons of carbon per hectare, generally applies to any forest more robust than shrubland.) The RSPO forbids clearance of high conservation value (HCV) forest but makes no mention of HCS.

“While the real work of implementation begins now, the company’s decisive actions in recent weeks show that this is a company that’s ready to compete in the race to deliver the deforestation-free vegetable oil that consumers and investors around the world prize,” Hurowitz said in a statement. “Their commitment to sustainability shows that the company has the capacity to grow.”

First Resources has its work cut out for it. Its subsidiaries are involved in a number of conflicts with local communities and have also been singled out for clearing HCV forest, especially in Indonesian Borneo, or Kalimantan. Several complaints have been submitted to the RSPO against its operations and have gone unresolved for years.

One of them regards one of Indonesia’s highest-profile land disputes: a fight over territory involving a pair of indigenous communities in the country’s East Kalimantan province and a First Resources subsidiary called Borneo Surya Mining Jaya (BSMJ).

The subsidiary did a deal with residents of one of the villages, Muara Ponak, to set up an oil palm plantation, but residents of the other village, Muara Tae, say the land actually belongs to them. They accuse the head or regent of Kutai Barat district, a man named Ismail Thomas, of shifting their border with Ponak so that Ponak could sell Tae’s land to the company. Ponak’s chief denies the claim.

First Resources has one of the largest land banks of any oil palm grower operating in Kutai Barat, and across the district – as well as in neighboring Mahakam Ulu district, which recently seceded from Kutai Barat but was long presided over by Ismail – its operations are involved in similar disputes over the allegedly nefarious movement of borders.

Tomasz Johnson of London-based NGO the Environmental Investigation Agency (EIA), which filed the complaint in the Muara Tae case, said that while the new policy would be a positive step if implemented fully and effectively, for that to happen there would need to be a “paradigm shift” in the company’s approach to indigenous peoples and to conflict resolution.

“EIA remains open to engagement if there is a concrete, transparent process that might relieve the huge pressure First Resources has placed on [indigenous] Dayak communities, and prevent it from destroying more forest,” he said. “Until that is in place, any palm oil buyers should exercise extreme caution in having any dealings with this firm.” 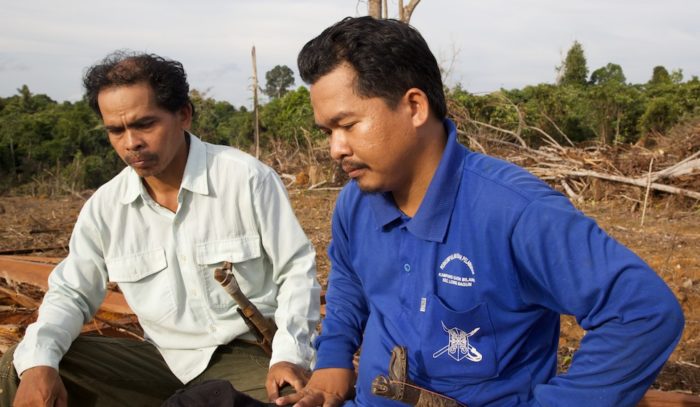 Muara Tae residents Petrus Asuy (left) and Masrani Tran sit in territory claimed by both their village and neighboring Muara Ponak, which struck a deal with First Resources to develop an oil palm plantation in the area. Photo: EIA

In another case, a First Resources subsidiary cleared thousands of hectares of orangutan habitat in West Kalimantan’s Ketapang district in violation of RSPO standards.

A complaint was filed with the RSPO in 2010, but the RSPO has never taken significant action to bring the firm into compliance with its standards, and the grievance remains unresolved.

“I have kind of given up on RSPO to be honest,” said the woman behind the complaint, who requested anonymity for fear of damaging relationships on which her organization depends. “It’s taken a lot of my time and energy and I don’t believe that we have made any good progress in making this industry more responsible.”

Last month, major global brands such as PepsiCo and Walmart and a network of activist investors called on the RSPO to adopt stronger criteria to eliminate deforestation from palm oil supply chains. A month earlier, the RSPO had announced a new set of voluntary guidelines labelled RSPO+, but the brands and investors asked the RSPO to incorporate those standards into its core principles rather than keep them separate.

Most recently, in June, environmental group LinkAR Borneo submitted an RSPO complaint against a different First Resources subsidiary in Ketapang for grabbing land from indigenous communities and illegally clearing land outside its permit area and with fire. First Resources’ head of investor relations, Foong Yuh Chien, said the company is engaging LinkAR and is committed to addressing its concerns.

First Resources’ new policy will have to deal with problematic operations in Sumatra as well as in Kalimantan. In Indonesia’s Riau province, a First Resources subsidiary has cleared carbon-rich peatland in apparent violation of Indonesia’s partial logging moratorium in primary forests and on peat. Local officials have ordered the company to halt its operations since May last year, according to the Jakarta Post.

In recent weeks, First Resources has announced a suspension of clearing in the concession.

“It’s particularly important that First Resources stay engaged to solve serious issues, like forest and peat clearance in tiger habitat by their subsidiary in Riau, hazardous pesticide use and methane emissions,” the Union of Concerned Scientists’ Miriam Swaffer, who worked with community groups to identify deforestation and peat clearance in First Resources’ supply chain, said in a statement upon release of the new policy.

Forbes ranks First Resources CEO Ciliandra Fangiono and family 22nd on its Indonesia’s 50 Richest list, valuing their net worth at $1.5 billion. The company has more than 170,000 hectares of plantations across Riau and East and West Kalimantan, according to Forbes.

Ciliandra’s father, Martias Fangiono, was a major player in the Indonesian timber business during and after the Suharto dictatorship. In the late 2000s he was convicted of corruption in conjunction with East Kalimantan’s then-governor and made to pay a $38 million fine.

*A previous version of this story said First Resources designed the policy in conjunction with a coalition of environmental groups, including The Forest Trust (TFT). In fact, First Resources has only been in touch with TFT to find out how it might help guide implementation and exchanged emails about the policy with groups like Forest Heroes and the Union of Concerned Scientists.