Residents of Paser, a district in Indonesia’s East Kalimantan province, protest against a coal mining company in February. Photo courtesy of the Indigenous People’s Alliance of the Archipelago (AMAN)

A coalition of local NGOs in Indonesia’s East Kalimantan province is campaigning for an end to the criminalization of residents who oppose plantation and mining projects on their land.

In an interview with Mongabay-Indonesia, Merah Johansyah Ismail, head of the East Kalimantan branch of the Mining Advocacy Network (Jatam), one of the groups in the People’s Coalition for Sovereignty Over Natural Resources, highlighted four cases in which he said local people had been unfairly charged as lawbreakers simply for defending their land against encroachment by powerful interests.

The cases involve coal mines in Paser, Berau and Kutai Kartanegara districts and a logging operation in Mahakam Ulu district.

“In many land disputes, the company fosters horizontal conflict, pitting community members against one another,” Merah said. “If that’s not effective, the company will criminalize the people [who oppose the project].”

Merah’s statement echoes what was a prominent theme in the Indonesian government’s recently concluded national inquiry into land conflicts affecting indigenous peoples: the use of “divide and conquer” as a strategy for separating communities from the rights to their territory.

The coalition’s campaign jibes with President Joko “Jokowi” Widodo’s promise during a meeting with the Indigenous Peoples Alliance of the Archipelago (AMAN) last week to secure the release from jail or prison of indigenous citizens who had been criminalized.

It also underscores that in Indonesia today, thousands of communities are involved in conflict with companies, the state or each other, according to government statistics. Half of the disputes involve oil palm, whose rapid expansion is also fueling Indonesia’s sky-high deforestation rate.

AMAN is a member of the East Kalimantan coalition, which also includes the Indonesian Forum for the Environment (Walhi), Gusdurian Kaltim, KOPRI PMMI, Pokja 30 and Nurani Perempuan.

The first case highlighted by the coalition involves the alleged criminalization of an indigenous woman in Paser, where Korea-linked Kideco Jaya Agung (KJA) operates an open-pit coal mine. The company filed a police report against a local woman in her late fifties, Nurbayati, for impeding its activities. She was charged under Article 162 of the 2008 Law on Mineral and Coal Mining. Local people have performed a number of customary rituals to counter the company’s expansion and garner national attention and chronicled their activities on the Paser Bekerai Facebook page. 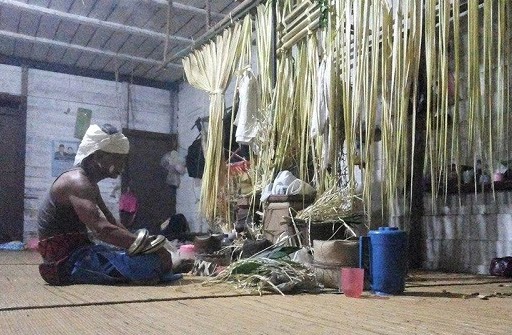 An indigenous resident of Indonesia’s Paser district participates in the Melas Taun ritual, held in March to counter the activities of a coal mining company. Photo courtesy of the Indigenous Peoples Alliance of the Archipelago (AMAN)

The second case involves the arrest and naming as a suspect of Theodorus Tekwan Ajat, a resident of Mahakam Ulu’s Long Isun village, for taking a chainsaw and the keys to a bulldozer owned by logging company Kemakmuran Berkah Timber (KBT). Tekwan was detained from August to December last year and is still required to report to the police.

The company argues that it is operating in the territory of Nara Aruq village and that it has an agreement with residents there, but the Long Isun side says the land is actually theirs. They accuse the district head or regent of shifting their border with Nara Aruq via a decree in order to accommodate the company, a common refrain among residents of Mahakam Ulu and also neighboring Kutai Barat district. (Mahakam Ulu recently seceded from Kutai Barat to form its own district; Kutai Barat Regent Ismail Thomas issued the Long Isun-Nara Aruq decree before that happened.) The case of Muara Tae and Muara Ponak, a pair of villages in Kutai Barat, is one prominent example which was featured in the national inquiry. Long Isun residents perform the adat napoq ritual in which the ancestors are consulted for help, in this case against encroachment by a logging company. Photo courtesy of Nurani Perempuan

The third case involves the alleged land grab by coal miner Binamitra Sumberarta of 134 hectares owned by two farmers groups, PPM and Rimba Raya, in Kutai Kartanegara’s Teluk Dalam village. Locals accuse the company of using fake papers and working with the police to stymie opposition to the Delta coal mine project. They reported the case to the police in 2013, but they say the authorities have yet to act.

Kutai Kartanegara has the country’s highest per capita income, in large part due to the proliferation of coal mines. The regent, Rita Widyasari, whose father set up an extensive patronage system before his conviction for corruption when he was regent, is herself known for her extensive coal interests.

The fourth case involves an alleged incidence of land grabbing in Berau and the naming as a suspect of resident Mupit Datusahlan for impeding the activities of a mining company. According to Jatam, the company there, Kaltim Jaya Bara (KJB), lacks a borrow-and-use permit from the Environment and Forestry Ministry to legally operate in the forest zone.

The coalition requests that law enforcement officials, especially the province’s police force, act fairly, and not side with investors. “We ask these cases solved completely with the legal process that is transparent and free from intervention of various parties,” Merah said.

Allegations of abuses by the security forces were a constant throughout the national inquiry, which was spearheaded by Indonesia’s National Human Rights Commission (Komnas HAM). In case after case, law enforcement authorities were found to have lined up with commercial interests.

“The police, they know there is adat [indigenous] law,” Sandra Moniaga, the Komnas HAM commissioner who led the inquiry, told Indonesian newsmagazine Tempo last year. “But in practice, when they receive a report from the company, they just use state law, the criminal code, and that is unfair because for the community.”