by Mrinalini Erkenswick Watsa on 14 July 2015 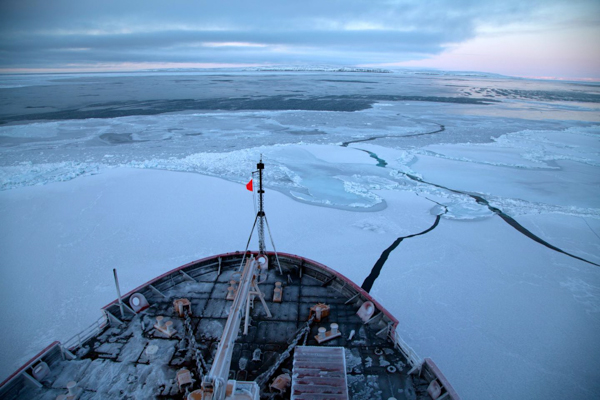 One byproduct of rising carbon-dioxide levels is increasing ocean acidity — a phenomenon that scientists have termed an existential threat to marine life. The waters of the Arctic and the far-north Pacific are particularly prone to acidification as a result of several natural factors, so scientists regard the region as the proverbial canary in the coal mine for the rest of the world’s oceans. A new study shows that within just fifteen years these waters may be too acidic for a range of marine animals to build and maintain their shells year round.

Ocean acidification works like this: The top layer of the ocean comes into contact with atmospheric gases, gradually dissolving them. Carbon dioxide forms carbonic acid when dissolved in water, increasing the ocean’s acidity. As ocean water acidifies, it eventually loses its ability to maintain levels of calcium carbonate minerals that many marine organisms, from tiny plankton at the bottom of the food chain to clams and crabs, require to build their shells.

The new study, published in the journal Oceanography, notes that already, “[t]he rapid accumulation of carbon dioxide in the upper thousand meters of the ocean has fundamentally altered the chemistry of seawater, making the ocean on average ~30% more acidic.”

To identify how long it would take for Pacific-Arctic waters to reach critical thresholds beyond which shelled animals would not be able to reproduce or survive, researchers from the US National Oceanic and Atmospheric Administration (NOAA), the University of Alaska Fairbanks, and Woods Hole Oceanographic Institution spent a month on the US Coast Guard cutter Healy in the Bering, Chukchi, and Beaufort Seas off Alaska.

From cutter Healy, they evaluated the water chemistry in the region, measuring things like temperature, salinity, and dissolved carbon. With their measurements they were able to validate the predictions of a computer model designed to predict changes in ocean acidity in the region. They then used the model to project future acidification levels in the Pacific-Arctic region.

The model predicted that levels of aragonite — a calcium-carbonate mineral critical for shell building — will fall mostly below natural thresholds for most of the year in 2025 in the Beaufort Sea, in 2027 in the Chukchi Sea, and in 2044 in the Bering Sea.

"Our research shows that within 15 years, the chemistry of these waters may no longer be saturated with enough calcium carbonate for a number of animals from tiny sea snails to Alaska King crabs to construct and maintain their shells at certain times of the year," Jeremy Mathis, an oceanographer with NOAA and lead author of the study, said in a press release.

The ripple effects of these large-scale ecosystem disturbances are likely to be felt higher up the marine food chain. Eventually, they may have enormous economic and nutritional ramifications for human populations that rely on fish. According to the release, nearly 60 percent of the US’s commercial fisheries landings by weight are harvested in Alaska. That’s 5.8 billion pounds of seafood worth $1.9 billion annually.

"The Pacific-Arctic region, because of its vulnerability to ocean acidification, gives us an early glimpse of how the global ocean will respond to increased human-caused carbon dioxide emissions, which are being absorbed by our ocean," Mathis said in the press release. "Increasing our observations in this area will help us develop the environmental information needed by policy makers and industry to address the growing challenges of ocean acidification."