As the rush for land in Southeast Asia continues at breakneck speed, often bringing with it social and environmental destruction, a new study by a major environmental research group explores how well investors really know where their money is going, and the possibilities and limits of existing data in achieving greater accountability.

The study by the Center for International Forestry Research (CIFOR), “Trying to follow the money: Possibilities and limits of investor transparency in Southeast Asia’s rush for ‘available’ land,” explores three regions where land has been widely seen as available for new investment: Indonesia’s outer islands; the “development triangle” where Cambodia, Laos and Vietnam meet; and the Golden Quadrangle region which comprises the borderlands of northeastern Myanmar, northwestern Laos, southern and western Yunnan, and northern Thailand.

In those areas, investors have funneled huge amounts of money into the forestry, rubber and sugar sectors, among others. But the outside investment often brings local problems, including deforestation and land conflicts.

With the power of grassroots social movements against land grabbing growing in the region, the report argues that it is more important than ever for investors to ensure they are practicing due diligence and accessing accurate information on the specific projects they are financing. 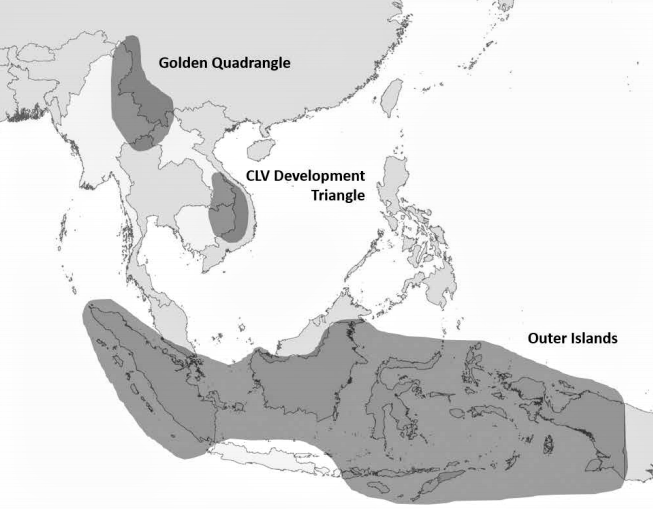 The three growth areas identified in the study. Image: CIFOR

However, “a central challenge hindering better regulation and accountability in both the public and private sectors is the shortage of good data about where land-based investment and trade actually take place,” the study notes.

“Despite a range of research and other efforts to systematically track large-scale land deals, basic questions about who is developing what kinds of projects, where, and who is investing in them, remain difficult to answer with any degree of certainty.”

Using publicly available financial data that companies give to their investors, and combining this with spatial data on land deals, the study attempts to address some of these challenges.

Rather than focusing on specific countries, the report takes a “landscape-based” approach, arguing that it is more helpful to view such investments as transnational arrangements.

The approach, it says, is used “as much to highlight the uncertainty inherent with the currently available data – and thus to argue for the advancement of transparency-creating processes – as to make definitive claims about what is actually going on.”

In Indonesia’s outer islands palm oil sector, the report identifies “a mix of transparency and opacity” in available data.

Combining the moderate levels of transparent financial and spatial data “shows just how opaque the sector remains when it comes to important issues like social and environmental performance in particular locations.”

Key issues determined by combining the data are companies’ use of subsidiaries, which make it more difficult to analyze parent companies’ investments, and a lack of up-to-date data, which makes tracking new investments problematic. According to the report, Vietnamese rubber conglomerates – including Hoang Anh Gia Lai Group, a company that had been a recipient of World Bank funding through a Vietnam-based venture capital group – were able to buy up several times the legal limit of land allowed under Cambodian law by establishing numerous subsidiaries.

The investments led to multiple allegations of human rights abuses and environmental degradation, which sparked a probe by the World Bank’s investment arm, the International Finance Corporation, into the deals.

The CIFOR report’s assessment of the “development triangle,” a common site of land disputes, shows that a “more comprehensive approach to smallholder protection is needed.”

It notes that in this area, “land availability is often created through concession making, and … the gap between investment dynamics and regulatory visibility keeps this process largely hidden from public view.” 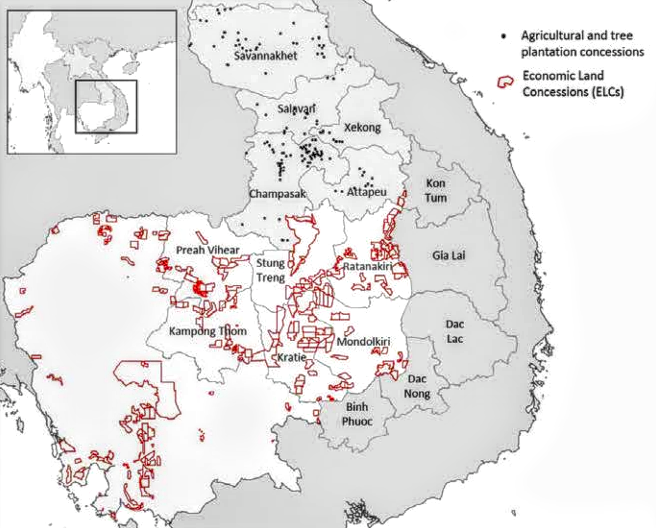 Concession locations in the ‘development triangle,’ where Cambodia, Laos and Vietnam meet. The map is based on 2013 data from Lao Decide Info and Open Development Cambodia. Image: CIFOR

Elsewhere, in the Golden Quadrangle, where the Chinese government is a major investor, there is a relatively large amount of data available.

But “the larger uncertainty is the fraction of the investment landscape that remains outside of the public domain entirely.”

According to the study, the very existence of the data “creates openings for dialogue about spatial transparency related to land-intensive investment and development cooperation.”

Jago Wadley, a senior forest campaigner with the Environmental Investigation Agency (EIA), said the lack of transparency in land investments extends to reporting requirements in European and Asian stock exchanges.

An EIA report last year, Wadley said, “found that existing rules do not adequately require issuers to disclose all permit information underpinning land tenure claims that in turn underpin financial values attached to shares traded on exchanges. It also found that no rules prevent companies trading shares in land assets illegally acquired, held or operated. It found that stock exchange operators do not have a verification function that might verify the factual accuracy of claims made in financial statements linked to land holdings.”

“Investors should seek to dramatically increase [such] corporate transparency. … Rules should require listed companies to disclose (through publication of the actual documents) all permits and permissions underpinning land holdings that significantly contribute to the financial value of the shares they trade.”