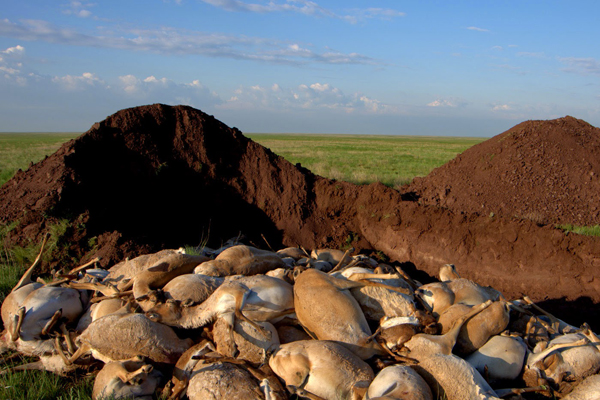 Saiga perish by the thousands in the Betpak-Dala region of Kazakhstan. Photo by: Sergei Khomenko/FAO.

The good news: conservationists believe that whatever killed off over a hundred thousand saiga in Kazakhstan in less than a month has abetted. The bad news: the final death tally is 134,252 saiga or around half the population of an animal already considered Critically Endangered. Given the dire situation, conservationists are now asking for emergency donations to the Saiga Conservation Alliance (SCA) to help keep the species from extinction (donors in the U.S. can give here).

“It seems like the crisis is over now,” E.J. Milner-Gulland, saiga-expert and Chair of the SCA, told Mongabay. The government of Kazakhstan has submitted a report to the World Organization for Animal Health with the total number dead in Kazakhstan’s Betpak-Dala region.

Saiga are antelope with long, trunk-like noses. They once roamed the Central Asian plains in the millions, but decades of poaching, habitat loss and development projects in migration routes pushed the population down to 20,000 before conservationists helped the species recover partially over the last 15 years. Prior to the mass mortality event, conservationists estimated a total global population around 260,000. The Betpak-Dala population was among the largest until now.

Still, researchers remain uncertain about what caused the mass mortality.

“It seems like there was a mixture of factors, which is likely to include the females being weakened by calving, one or more latent infections which were present in the adult animals but not causing clinical symptoms (e.g. Pasteurella), something about the pasture (e.g. particularly lush fodder), maybe weather, maybe a vector-borne infection as well,” said Milner-Gulland, who added that any one of these would not have caused such a demographic collapse, but perhaps the combination created a perfect storm.

“Much more work is needed to understand this fully, including going back to historical records of previous similar events,” Milner-Gulland added.

Donations will help conservationists and scientists piece together what happened, as well as protect remaining populations from poaching, the biggest threat to saiga across its range. Scientists also plan to visit the site to collect more data and conduct an aerial survey to count how many animals survive in the Betpak-Dala region.

This isn’t the first time saiga have perished en masse—around a 100,00 died in 1984 in a similar large-scale mortality—but this was different in that it killed off whole herds.

“This type of mass-mortality seems to be a feature of saiga biology. It is very dangerous when the population is low, because it can potentially cause the entire wipe-out of a population,” said Milner-Gulland. “So we need to make sure that our saiga populations are large enough to withstand these events, through good protection.”

There are five saiga populations in Central Asia today, including a distinct subspecies in Mongolia: Saiga tatarica mongolica. Milner-Gulland said three of the five populations are in trouble.

“The Russian population is at critically low levels, having been heavily poached, particularly in the last couple of years. Similarly the Ustyurt population which is shared between Kazakhstan and Uzbekistan—this is in the low thousands as well, due to continued poaching and the construction of a border fence by Kazakhstan in 2012, which blocks its migratory routes,”explained Milner-Gulland.

She added that “the only good news is coming from Mongolia, where a recent count puts the Mongolian sub-species at a comparatively healthy 15,000.” 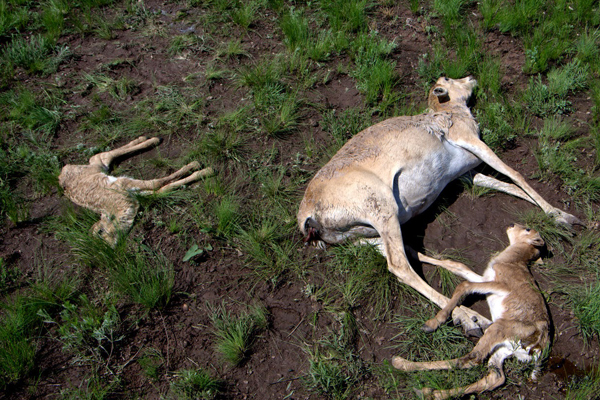 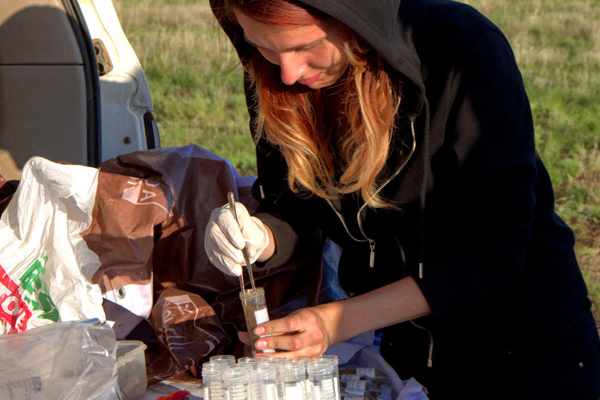