“No Chadín” read the graffiti painted crudely on the trunk of a lone tree standing astride a dirt road in the Peruvian outback. The tree adorned the front yard of a modest adobe home surrounded by a smattering of fruit trees and a small field of banana trees.

Peruvian campesinos have a reputation for their hospitality. But when I called out a greeting, the owner growled back angrily: “Who are you?” My guide, a local schoolteacher named Primi Araujo, explained that I was an international journalist. More importantly, I was not a representative of the Brazilian construction firm Odebrecht. “They [Odebrecht employees] took photographs without my permission,” the householder added, partly explaining his antipathy for unexpected visitors.

My rough start with that small-scale farmer, Paquito Vargas Machuca, offered a rude but telltale introduction to Odebrecht’s reputation in Huanabamba, an isolated town of 1,000 residents set in a canyon crossed by the Marañón River. Vargas Machuca and his family of six stand to lose their farm when Odebrecht floods their land to create the 38 square kilometer (23.6 square mile) reservoir that will power Rio Grande 1, one of a trio of hydroelectric dams collectively known as “Chadín,” slated for the region. The village on the southeast edge of Peru’s Department of Cajamarca, would be the hardest hit of 20 communities to be impacted by the Chadín dams.

The Marañón River is one of the mighty Amazon’s most important tributaries. It runs through a region of northern Peru where two of South America’s most important bioregions merge: the mountainous highlands of the Andes joining the dense tropical rainforest of the Amazon. It is one of the most biologically rich, rapidly changing and threatened areas of the world.

According to a 2010 agreement between Peru and neighboring Brazil, 20 dams will be built along the Marañón over the next decade. Critics who oppose these projects point to the human suffering that will result for people such as Vargas Machuca, and to the inevitable environmental effects on an ecologically sensitive region. They raise yet another question: Why drown some of Peru’s most productive and fertile agricultural lands?

Cajamarca, one of Peru’s 25 departments, is roughly the size of the U.S. state of Maryland, with an area of about 33,000 square kilometers (20,505 square miles). It covers just 2.6 percent of Peru, but supplies 6 percent of agricultural and livestock production, including bananas, mangos, rice, beans, manioc and other staples consumed by Peruvians, according to government figures. The region is also an important producer of coffee and cocoa. 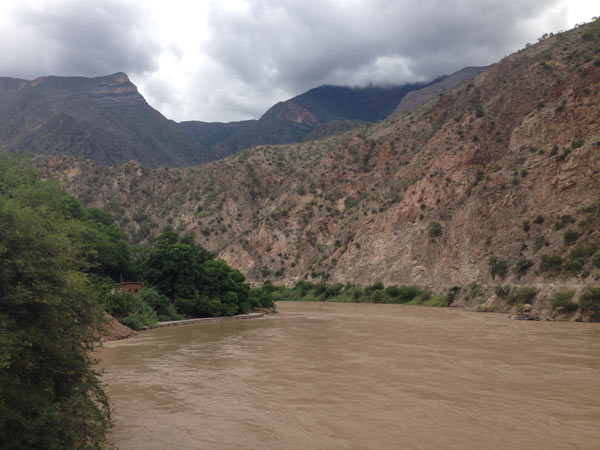 Peru is planning a series of huge dams on the 1,700-kilometer (1,056-mile) Marañón River, the main source of the Amazon. There is intense local opposition to the dams, which some say could end in violent resistance. Photo credit: Veronica Goyzueta

Virtually all of this output comes from family farms, meaning that agriculture provides employment for some 340,000 people in the department, over 12 percent of its population.

Cajamarca is also the main national beef producer, with 703,000 head of cattle, and milk producer, with 324,000 tons representing 17.8 percent of the national total. The region’s productivity has not been lost on large-scale food processors like the multinational Nestlé Corporation and national champion Grupo Gloria. Both have established dairy processing plants here.

Cajamarca has earned its nickname as the Breadbasket of Peru.

“We eat well here,” said Vargas Machuca. Yet when he first heard about the Chadín dam, the farmer sort of liked the idea. “They [Odebrecht] offered lots of great stuff, but none of it is actually going to come through,” he said.

Vargas Machuca received a proposal from Odebrecht to sell his crops and land to the company. Odebrecht also offered to build a new house for his family in an undefined place, and transfer them there. “They will move us probably to a deserted area, where there is only sand”, he said. 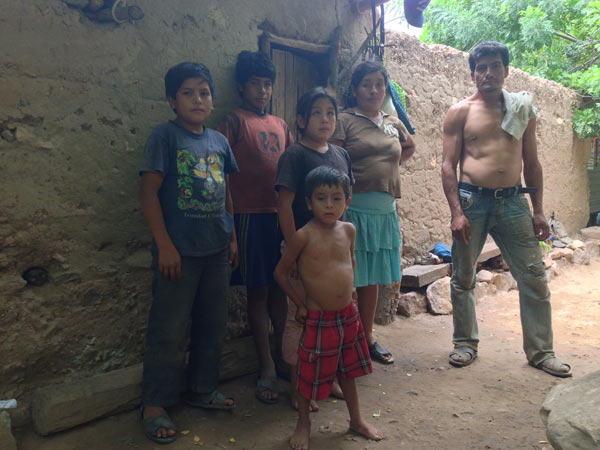 Paquito Vargas Machuca and his family say they are being pressured to accept an offer by the Brazilian construction firm Odebrecht to sell their land and be resettled to an undisclosed desert location against their will. Photo credit: Veronica Goyzueta

On a nearby farm, Gregoria Bazán also opposes the dam. “We have a plantation of mangos, limes, bananas, coca leaves, lemons that we sell in Celendín and Cajamarca.” Odebrecht employees who live nearby eat the food she and her neighbors produce. “What are they going to eat afterwards – money? They’ll have silver and gold, but nothing to eat. They will not have water,” she laughed.

Locals want investment in agriculture, not in electricity. “The region produces the best cocoa in the country, but the roads they’re building make no sense in terms of transporting produce,” said Milton Sanchez, general secretary of the Celendina Insterstate Platform (PIC). “We want roads to take fruit to the market, not for the valleys that will be flooded.”

“They are blocking free running rivers, which will be dammed for the first time, at various spots, provoking alterations in the hydrological flow of the Amazon, and without knowing what the impacts will be,” said César Gamboa, executive director of the Peruvian NGO Law, Environment and Natural Resources (DAR), in Lima.

Another issue raised by critics of the hydroelectric plants in Cajamarca is that they will supply energy primarily for mining firms. Cajamarca is home to Yanacocha, the world’s biggest gold mine. There are 16 mining projects that will need large amounts of electricity – especially Conga, El Galeno and Michiquillay – located in the proximity of the planned Chadín dams.

In a speech at a mining industry confab held in 2013, in Arequipa, Peru, the nation’s president Ollanta Humala was quite candid about channeling the new energy into mining. “As we can see, gold and mining projects predominate in this region, in the hills of Piura, Lambayeque, Cajamarca and Trujillo,” he said. “For them to work, they need energy. And that’s why we are preparing to build at least five plants. Using hydroelectric power, they can reach a generating output of over 10 thousand megawatts.” The five projects highlighted by the president were: Chadin 2, Rio Grande 1 and 2, Veracruz, Rentema and Manseriche, just a handful of the 20 on the drawing board for the Marañón River.

“Any dam is going to damage a river, but governments don’t take that into consideration since they just want the electricity,” said José Serra Vega, a Peruvian engineer who wrote a report called Costs and Benefits of the Chadín 2 Hydroelectric Project on the Marañón, published by the NGO Forum Solidaridad Peru last year. “For the company it is a business. They build it if it is profitable.”

Gamboa agrees, noting that dam feasibility studies favor economic benefits while downplaying environmental or social impacts. “We live in a time of weakening standards. There is a fast-track to approve projects in the region, with a reduction of safeguards, which are considered as obstacles to investment,” said the researcher, who points to a lack of governance, transparency and public participation in the development of these mega-infrastructure projects.

President Humala’s press secretary, Cynthya Montes, did not answer requests for interviews or information for this article. The general director of the Welfare and Social Action Department, Felix Grandez, said he didn’t know anything about the hydroelectric projects on the Marañón River. Representatives in charge of infrastructure, energy, environment and social programs at the Ministry of Energy and Mines (MEM) were also contacted, as were officials from the Office of Environmental Evaluation and Inspection (OEFA) and the government of Cajamarca. All failed to respond.

Schoolteacher Einer Esteban Dávila, who grew up in Huanabamba, lives near Nuevo Huabal, where residents of the community of Huabal were relocated prior to the filling of the El Limón dam’s reservoir. “They fooled people into leaving [their homes],” he said, describing what had been done there, and what he wants to avoid in Huanabamba.

For the residents of Huanabamba, Huabal serves as an example of Odebrecht’s indifference. “Odebrecht took people to a place without decent living conditions. There was a large landslide, and many people lost the little they had, and they ended up feeling tricked,” explained Milton Sánchez of PIC.

Farmer Vargas Machuca knows this story and doesn’t want to move. “They [Odebrecht] said that we agreed to a sales contract, that they are going to pay us, and that they will move us somewhere else. But that place is a desert,” said the peasant, who lives from fishing, and from the fruits and vegetables that he harvests from his fertile farm beside the Marañón River.

Pierina Garateguy, an Odebrecht spokesperson located in Celendín claimed that everything is in order: “The compensation programs are undertaken in a just manner, within legal parameters, and in strict accordance with the norms in force. The company has made a commitment to improve the conditions of affected people, whether through a buyout, resettlement or relocation in the affected areas, guaranteeing better living conditions, with water, energy and other basic services, generating sustainable value added over time.”

Aurora Araujo, a community leader in Huanabamba and Celendín, said that meetings with Odebrecht engineers have been tense and complicated. Many were delayed, creating problems for farmers and indigenous people who frequently had to travel long distances, walking for days to get to the events. “They [Odebrecht] bring people who are not from the community, sometimes to attack us,” she said, holding out the documents from the cancelled meetings.

“They tell us that we will be removed by force if we don’t accept their proposal. They trick people with [gifts such as] panettones and ovens, and have been able to get the signatures of support from some of the people who already sold their places and no longer have land in the area,” said Araujo, who calculates that 5,000 people will be impacted by the Marañón dams and reservoirs.

Araujo, who lives in a modest old home in downtown Celendín, said that Odebrecht employees accused her of taking money from NGOs, and that these same men have made death threats against people who oppose the projects. “When we have a meeting, there are shots. It is god who protects us in the struggle for water.”

A second attempt was made to contact the Odebrecht office in Celendín to get a detailed response to these accusations, but they did not respond. Efforts to speak with Odebrecht officials in Lima and São Paulo also came up empty. 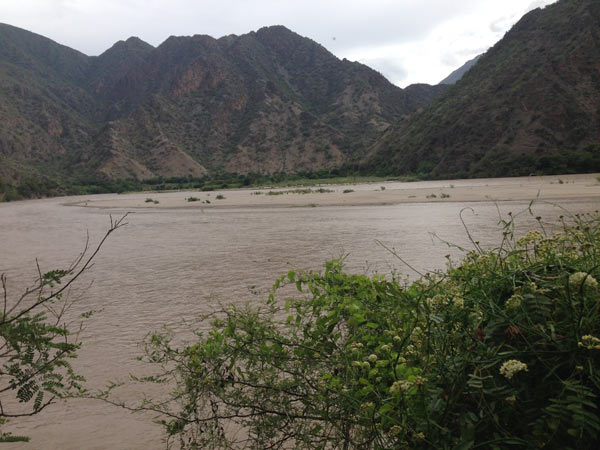 The Marañón River is just one of five major Amazon tributaries in the Andes Mountains slated for 151 hydroelectric dams. Experts say the dams could be a social and environmental catastrophe for Amazonia. Photo credit: Veronica Goyzueta

Santos Saavedra Vasquez, president of Cajamarca’s “Rondas Campesinas”, a name given to autonomous peasant patrols in rural Peru, also accuses Odebrecht of harassing farmers. He warns that this tension could intensify the social, environmental and cultural conflicts that already surround neighboring mining projects. “We have leaders who are being pressured and persecuted”, he said, adding that the government is also to blame for the criminalization of the demonstrators.

Protests against miners in Cajamarca, especially in Conga, left 11 dead and 282 wounded between 2004 and 2013. According to the Defensoria del Pueblo, there is a high rate of criminalization of protests, with some 303 environmental leaders arrested and tried in court.

“They want to take us by force. We don’t want dams. Nobody wants to lose their farms. Where are we going to live?” asked Aurora Araujo.

“We don’t want charity,” declared Vargas Machuca. Grinding poverty and misery are the dilemmas facing Cajamarca today, a Peruvian department sitting atop some of the world’s largest gold deposits. The damming of the Marañón River is likely to increase that misery, say local residents, not reduce it.