A high profile pledge by the world’s largest meat company to limit deforestation for cattle production in the Amazon appears to be working, resulting in a dramatic increase in compliance with environmental registries and reduced forest clearing among supplier ranches, finds a comprehensive study published in the journal Conservation Letters.

To reach that conclusion, researchers led by Holly Gibbs of the University of Wisconsin-Madison analyzed cattle sourcing by JBS, which along with two other Brazilian meatpacking giants Marfrig and Minerva, was pushed into a zero deforestation commitment by Greenpeace and federal prosecutors in 2009. Gibbs and her team examined the land use practices of all ranches that sold to JBS before and after its 2009 agreement.

The researchers found a significant impact from the agreements: JBS slaughterhouses have stopped buying from ranches associated with deforestation, JBS suppliers have stepped up environmental compliance by registering their properties with the rural environmental registry (CAR) at a rate far faster than their peers, and deforestation rates for JBS suppliers are substantially lower than before the commitment. Today fewer than four percent of JBS’s direct suppliers had recent deforestation on their ranches, down from 36 percent just prior to the agreement. 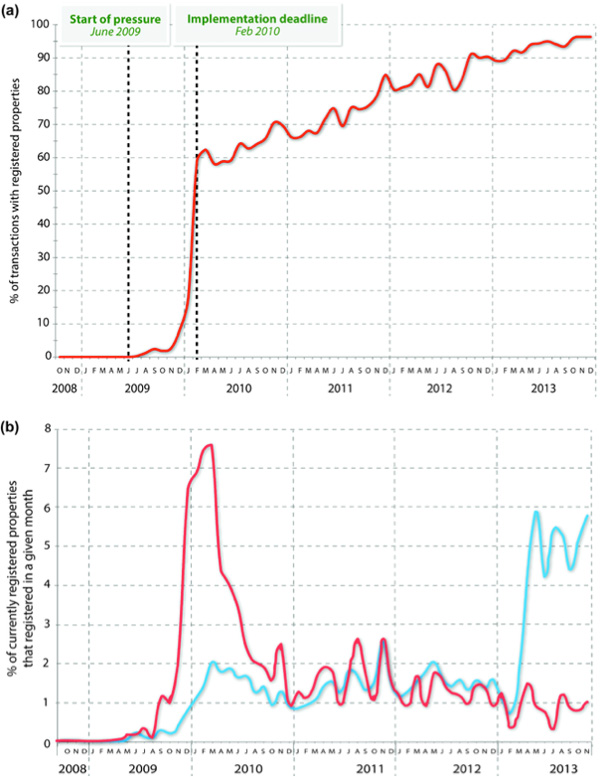 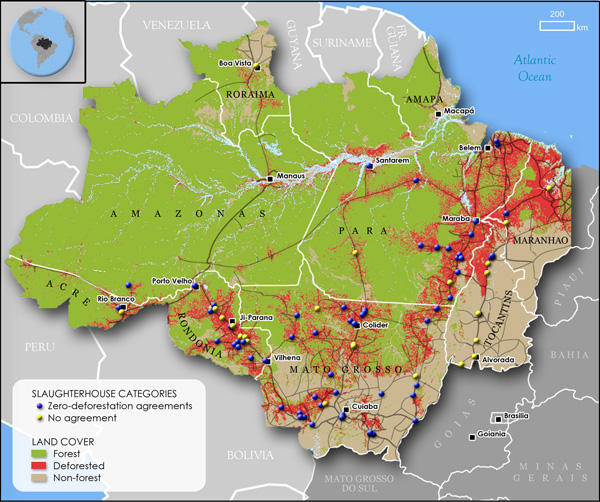 Major slaughterhouses in the Brazilian Legal Amazon that have and have not signed a zero‐deforestation cattle agreement (includes both MPF‐TAC and G4). Slaughterhouse locations identified using GPS locations collected in the field and high‐resolution imagery via Google Earth. Only federally inspected slaughterhouses (SIFs) are depicted. Smaller slaughterhouses are excluded. The Legal Amazon is defined by law to include the states of Acre, Amapa, Amazonas, Para, Rondonia, Roraima, Mato Grosso, Maranhao, and Tocantins, which each contain a portion of the Brazilian Amazon biome.

“We show that concurrent public and private supply-chain pressures could be a game changer, and help to finally break the link between deforestation and beef production,” said Gibbs in a statement. “Public enforcement of environmental laws is a formidable task in the Brazilian Amazon, which covers an area six times the size of Texas. But these market-based interventions are leading to rapid changes in the beef industry within a period of months, even in very remote areas.”

Conversion of rainforest for cattle pasture is the biggest driver of deforestation in the Brazilian Amazon, which accounts for nearly two-thirds of Earth’s largest rainforest. While the need to address the issue has long been apparent, it has been difficult to address due to the complexity of the supply chain, historical lax law enforcement and insecure land tenure, and the fact that 80 percent of beef produced by Brazil is consumed domestically. But in 2009 Greenpeace launched a campaign targeting the most exposed parts of the cattle business: beef sold in major Brazilian supermarket chains and leather sold primarily overseas to shoe companies and fashion brands. That campaign, coupled with a concurrent crackdown by authorities in the state of Pará, got the industry’s attention, pushing it to adopt the so called “cattle-agreement”. On an annual basis, deforestation in the Brazilian Amazon is about 20 percent since the agreement was established. 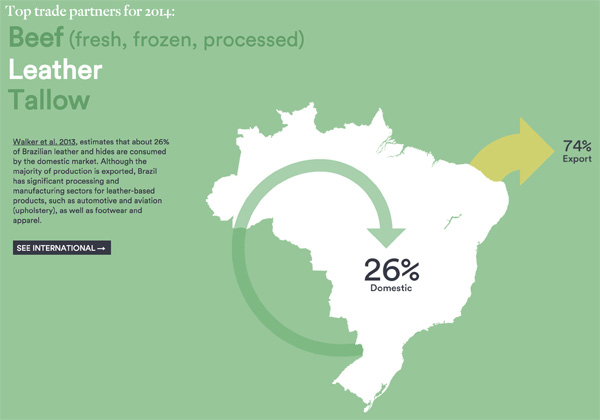 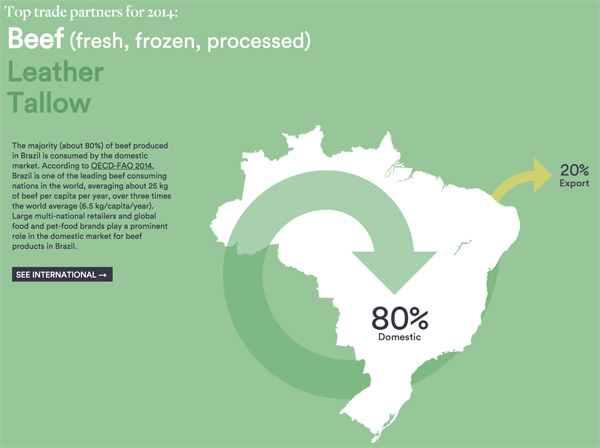 Destination of Brazilian cattle products. Charts courtesy of ZeroDeforestationCattle.org, a new site launched by the National Wildlife Federation (NWF) and the Gibbs’ lab.

But the agreement only applies the Brazil’s largest cattle producers, leaving plenty of gaps, including suppliers further down the supply chain of cattle giants, including calving and rearing farms. Furthermore the clandestine market is also very large. These factors limit the effectiveness of the measures, a point detailed at length by the researchers.

“Large portions of the beef supply chain are not yet monitored under the zero-deforestation agreements,” the researchers write. “In practice, the agreements regulate only direct purchases from supplying farms, thus ignoring calving ranches and other indirect parts of the supply chain. Cattle fattened on noncompliant properties with deforestation can leak to slaughterhouses that lack full monitoring systems; these cattle can also be laundered by moving them to a compliant ranch for direct sale to a slaughterhouse.” 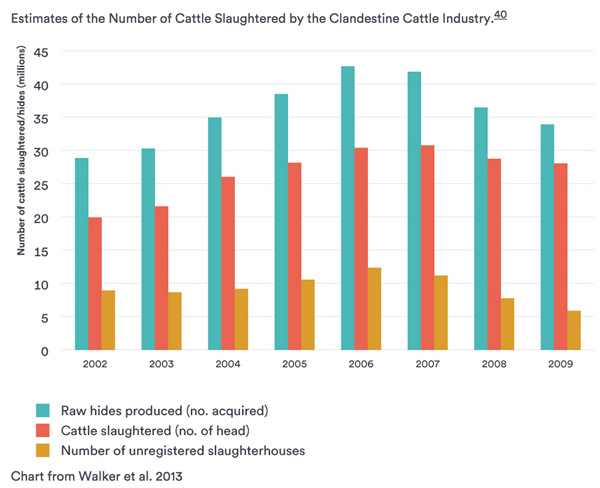 Accordingly, the authors call for strengthening monitoring systems at the slaughterhouse level, extending the agreement to all ranches in the supply chain, and investing in mechanisms that foster greater transparency in the sector, including the government’s collection of data used by companies to enforce zero deforestation pacts. Those measures could further limit forest clearing for cattle ranching at a time when there are rising fears that Brazil’s recent progress in reducing deforestation may be in danger of reversing — recent satellite data suggests that deforestation has been steadily rising over the past twelve months. 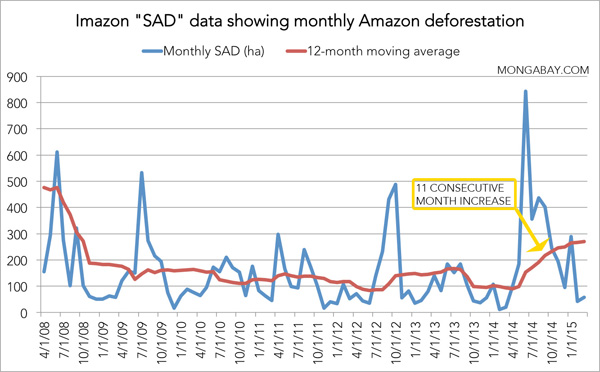 Reforms in the sector could have impacts beyond the Amazon. Since the 2009 commitments, dozens of companies that buy, trade, and produce commodities linked to forest clearing have adopted deforestation-free policies. These policies are still in their early days, but could signal to growers and producers further down the supply chain that business-as-usual practices are becoming less and less acceptable in the marketplace.

Gibbs says this trend could lead the private sector to become a driver of forest conservation rather than forest destruction.

“Every few weeks we see a major global corporation come forward and commit to removing deforestation from their supply chain,” said Gibbs. “These multinational companies have long profited from the exploitation of tropical forests, but they’re now at the forefront of an environmental movement to reduce the deforestation caused by agricultural expansion.”