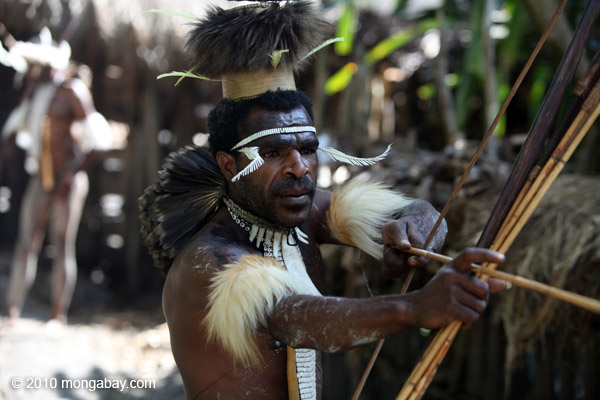 There’s a saying in the Indonesian palm oil industry: Sumatra is yesterday, Kalimantan is today, and Papua is tomorrow.

A new report sheds light on the industry’s rapid expansion in Indonesia’s easternmost region – and on the companies behind the plantation drive.

Some are major conglomerates. Others are more opaque, with no website or company name at their listed address in Jakarta. The authors of the report – it was published by the Pusaka Foundation, awasMIFEE and six other organizations – found that staff at several of their offices refused to give out any information. Local government officials could also be difficult to reach and reluctant to cooperate.

To inform their findings, the authors drew on Internet research and communication with local Papuan NGOs and church and indigenous organizations, as well as attempts to contact government and corporate sources.

The resulting West Papua Oil Palm Atlas portrays a frontier region’s early encounters with a crop that has come to dominate the Sumatran and Bornean landscapes – a portrait made that much starker by the central government’s foreign media blackout in the territory.

“Using the excuse of the conflict around the [local] independence movement, the Indonesian government makes it very difficult for international observers to access West Papua, and this has probably also resulted in a lack of awareness internationally about the ecological threats,” reads a text accompanying the report. 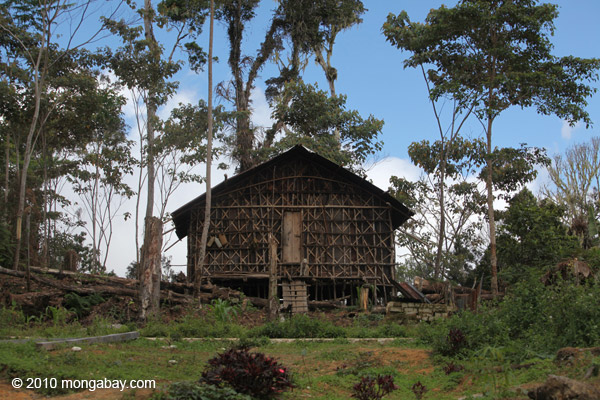 The report’s name refers to the entire western half of the island of New Guinea, a pair of Indonesian provinces where rebellion has simmered ever since Jakarta’s invasion in the early 1960s.

Detailed maps by district grouping illustrate the extent to which oil palm is advancing in the region. In 2005, there were just five operational plantations, but by 2015 there were 21, with another 20 firms on the verge of obtaining their final permit and many more with an early-stage location permit.

“If all these plantations were developed, more than 2.6 million hectares of land would be used up, the vast majority of which is currently tropical forest,” the text reads. 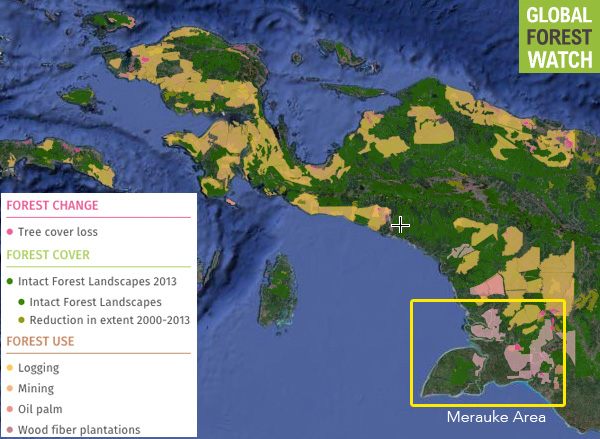 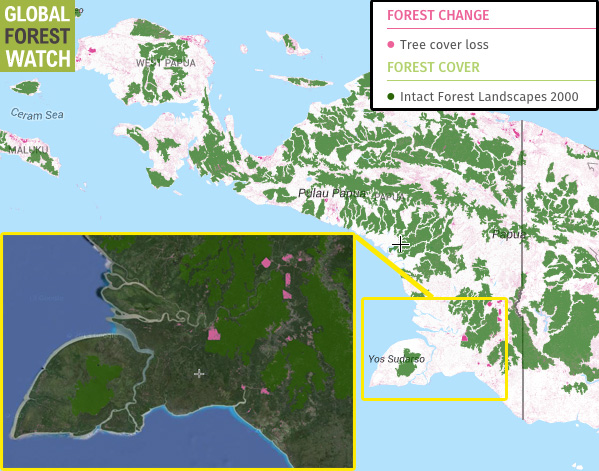 Maps from Global Forest Watch showing the main MIFEE area as well as concessions across Indonesian New Guinea as a whole.

Some of the more mysterious outfits appeared to the authors to have mainly a speculative interest in Papua, obtaining permits in order to flip them to one of the big national or transnational operations with the capital to actually develop the plantation.

The government of Boven Digoel regency, for example, licensed at least eight Menara Group subsidiaries to plant oil palm over hundreds of thousands of hectares. Six of those companies have likely since been sold on to Pacific Inter-Link, a holding of the Yemeni-owned Hayal Saeed Anam conglomerate, and Malaysia-based Tadmax.

“This type of shady behind-closed-doors business practice makes it impossible for any dealings with the local indigenous community to follow principles of free, prior [and] informed consent (FPIC),” reads the atlas, which notes that almost all of the plantations in Papua have caused conflict with the local indigenous communities who rely on the forest.

In neighboring Merauke regency, the atlas reports on the progress of the Merauke Integrated Food and Energy Estate (MIFEE), a stalled megaproject the central government recently announced it would revive.

Thirty-three oil palm developers are believed to have obtained in-principle permits in the regency from 2007 to 2014, with 10 engaged in either surveying or planting, including South Korean multinationals Korindo and Daewoo.

“It seems highly likely that Korindo used its local experience and contacts to help Daewoo establish itself in the area,” according to the atlas. “The two groups continue to cooperate, and local people report that the management of the two Daewoo companies and Korindo’s PT Berkat Cipta Abadi appear to be the same.”

The atlas is full of such insights. 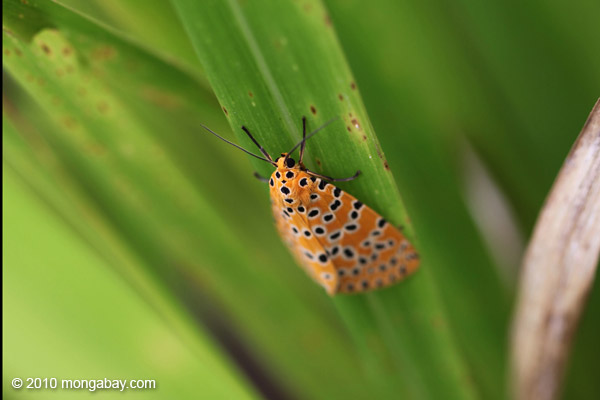 An orange moth with black and yellow polkadots in West Papua. Photo: Rhett A. Butler

To solve the myriad social and ecological problems the authors say have arisen from Papua’s oil palm explosion, the atlas offers a variety of recommendations. It asks the government to withdraw police and military personnel from plantation sites; develop guidelines about how to calculate compensation rates for use of community land; conduct a review of cases where rights violations are said to have occurred; create a transparent system for issuing permits, along with a website where anyone can view the documents; rethink its “top-down approach to development”; and more.

“It is hoped that this publication can become a tool for indigenous peoples and social movements who wish to understand the oil palm industry and defend their forest against these land grabbers, as they themselves should be the ones to determine what kinds of development will benefit their communities,” the text reads.

“For environmentalists and supporters of indigenous struggles around the world, we hope that this will also be a useful insight into the dynamics of the plantation industry and the threats it is causing in the third-largest tropical forest in the world.”