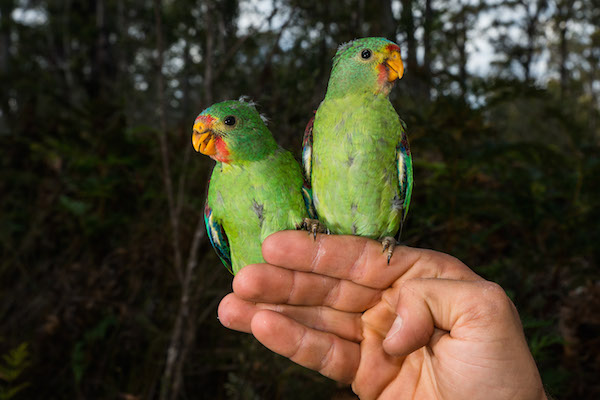 In the forests of Tasmania lives the swift parrot (Lathamus discolour), a highly threatened bird that breeds nowhere else in the world. New research published recently in Biological Conservation finds they are more at risk of extinction than previously thought, with introduced sugar gliders (Petaurus breviceps) and logging dealing two big blows to their remaining numbers.

The swift parrot is a small, colorful parrot with pointed wings and a long, pointed tail. Adult males are predominantly bright green and have a blue patch on the crown, a red frontal band, and throat and under-tail coverts. Adult females are slightly duller but with a prominent cream underwing-bar.

Globally, introduced predators are major drivers of extinction but native predators can also have serious effects, the authors write. In landscapes – particularly those modified by anthropogenic activities – multiple threats can be active simultaneously so synergistic interactions between different threats like predation and habitat loss accelerate the decline of prey populations. Island endemics are particularly vulnerable to predators and have suffered high rates of extinction following the introduction of predators. 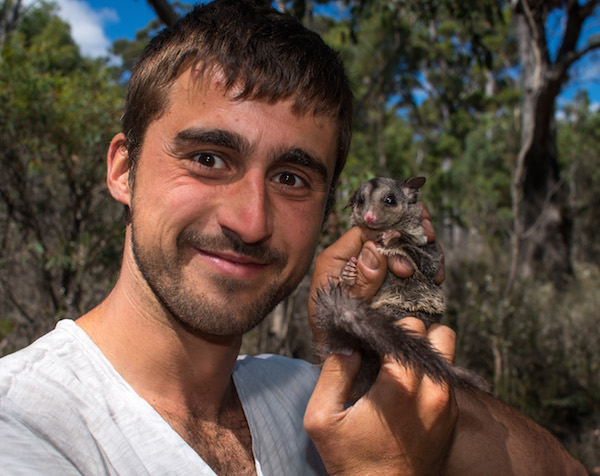 According to the authors, identifying the impact of these introduced predators on endangered prey populations is critical for conservation management.

The research showed that 50.9 percent of female swift parrots nesting on the main island of Tasmania were killed by sugar gliders while incubating eggs. This did not occur on offshore islands where, over a period of four years, only 16.5 percent of the swift parrot population bred.

For their study, the researchers used Population Viability Analysis (PVA), which is an important tool for quantifying such impacts when high quality life history data is available. When such data is available, tools like PVA help improve our understanding of how animal populations respond to environmental change and to identify the best management options. However, the authors say it is surprising that predictions from PVAs of future population decline based on current demographic data and the impact of threatening processes have seldom been used directly to assess the conservation status of species.

Using PVA, the researchers demonstrated that the remaining swift parrot population is likely to drop by up to 94.7 percent over only three generations.

These birds are the subject of an Australian National Recovery Plan, according to the study. Very little demographic or ecological data on the species was available until recently, but new research has revealed two important details about the species’ ecology. Fluctuations in the availability of food makes the swift parrots select entirely different breeding sites every year, over a 10,000-square kilometer range. Moreover, they suffer high but variable rates of predation from sugar gliders depending on where they breed. So far, researchers have found that sugar gliders are present at all the swift parrot breeding sites occurring on the main island of Tasmania, but are absent on the two smaller, offshore islands where the parrots sometimes breed.

Building on a 2014 study of which Stojanovic was the lead author, the researchers aimed to specifically examine the impact of sugar glider predation on the viability of swift parrot populations, and whether the current listing of swift parrots as Endangered is still accurate considering updated information is now available.

“Our PVAs indicate that the conservation status of swift parrots is worse than previously supposed,” the study says. All but one of the models used in the study predict an extreme (up to 94.7 percent) decline in swift parrot populations. The researchers believe that after evaluating their results against the framework of the IUCN Red List and the Australian Government Environment Protection and Biodiversity Conservation Act criteria, a population decline of over 80 percent within three generations makes a strong case for changing the swift parrot’s conservation status from Endangered to Critically Endangered.

“Uplisting will recognise the actual level of threat this species faces in the wild,” Dejan Stojanovic, a swift parrot expert and Postdoctoral Fellow at the Australian National University’s Fenner School of Environment and Society, told mongabay.com. Stojanovic, who discovered the problem of the sugar gliders’ predation, is the Tasmanian project leader for Professor Robert Heinsohn who is the lead author of the Biological Conservation study. “It will also highlight the ongoing impact of industrial logging of (the swift parrot’s) habitat.” He said the listing would also reinforce the conservation crisis that faces the species, “and ring alarm bells for the need for urgent intervention now to prevent extinction.”

Habitat loss is also a significant threat to the swift parrots. “Industrial logging is the principle cause of habitat loss in the swift parrot breeding range (eastern Tasmania),” Stojanovic told mongabay.com. “The industry is notorious in Tasmania for being unprofitable and environmentally destructive, and recent revelations obtained under freedom of information reveals (sic.) that the state government knowingly allows logging of swift parrot breeding habitat in spite of advice to the contrary from its own experts. 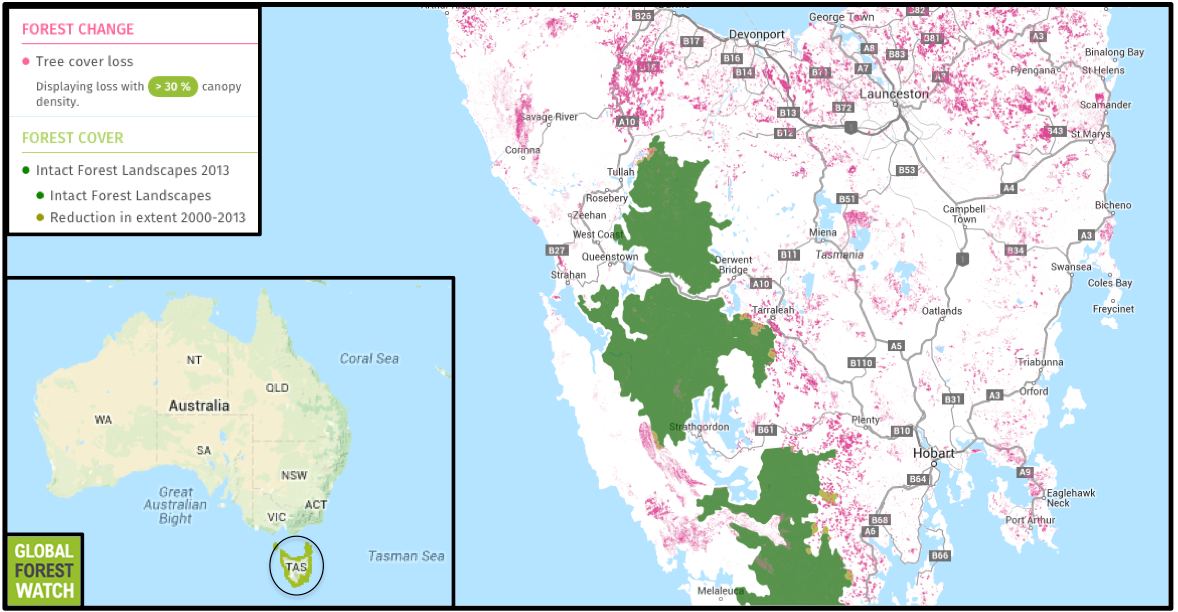 Swift parrots breed primarily in the forests along Tasmania’s eastern coast. However, data from Global Forest Watch show that region has been heavily impacted by human activity, with the island’s remaining intact forest landscapes – tracts of primary forest large and undisturbed enough to retain their original levels of biodiversity – relegated to the western portion of the state. Overall, Tasmania lost approximately 335,000 hectares, or nearly 7 percent, of its tree cover from 2001 through 2013. This number represents both deforestation and tree plantation harvesting. Click to enlarge. 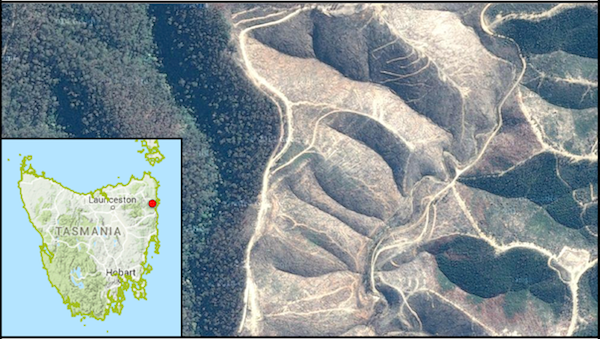 Swift parrots are the primary pollinators of a variety of Eucalyptus trees that are a commercially exploited species in Tasmania. These birds also provide important ecosystem services to forests through pollination, Stojanovic said, “and in the event of their extinction, it is probable that there would be a direct cost to the industry as a result of less effective pollination.”

With industrial deforestation posing a severe threat to the swift parrots, experts have called for a moratorium on logging in swift parrot breeding habitat. Currently, Stojanovic said, there are already existing prescriptions available that provide recommendations on how to deal with swift parrots in the context of industrial logging. “However,” he said, “recent evidence suggests that other management options can be implemented by logging companies, which result in greatly diminished conservation outcomes.

“As a starting point, we recommend immediate cessation of logging of swift parrot habitat in Tasmania until adequate revision of forest practices can be undertaken,” he said. “Any review should take into account the great advance in understanding about swift parrot ecology and conservation, and demonstrate how management of the species will be implemented, and provide a means for monitoring the effectiveness of mitigation measures.”

A matter of particular concern is that the high survival of swift parrots that sometimes breed on the offshore islands where sugar gliders are absent might not be enough to buffer the population against impending decline. This, the study says, is the parrots’ best chance at survival. But one that may not be possible. 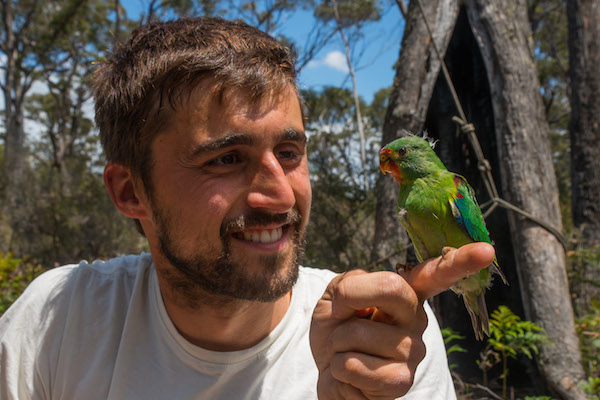