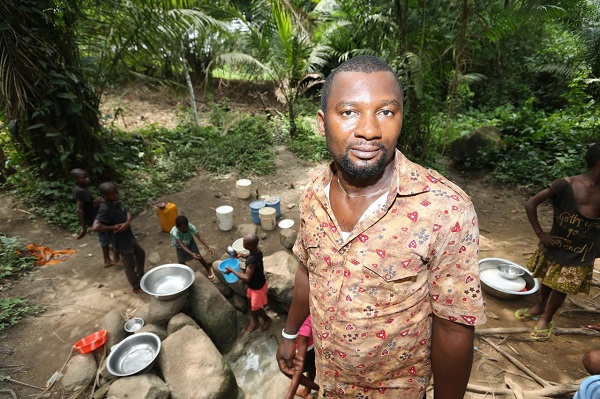 A youth leader who lives near one of Wilmar’s Nigerian oil palm projects shows an alternative water hole the community has dug as a result of the plantation polluting its main water source. Photo courtesy of Environmental Rights Action-FoE Nigeria.

Africa is often described as a new frontier for industrial palm oil production, such are the number of new plantations being planned and developed. The expansion of large-scale plantations on the continent, however, could be seen as a global industry returning to its roots, and that is no truer than in the case of Nigeria.

Cross River State, a coastal jurisdiction in southeastern Nigeria, still bears the marks of the country’s agricultural heritage when it was the world’s largest palm oil producer. That lasted until the late 1960s, when Malaysia and Indonesia surpassed it.

The landscape is now dotted with hundreds of small farms and agricultural developments. Many mark the sites of the government’s past attempts to set up large-scale plantations, which ended in failure or with significant forest destruction or both. These include projects backed by the European Union in the 1990s.

The state is also home to pristine tracts of rainforest and endangered species such as the Cross River gorilla, of which the latest figures suggest there are no more than 300 left.

This is where Wilmar, one of the world’s largest palm oil producers, has set up shop. Its projects through local subsidiary PZ Wilmar will cover close to 30,000 hectares, including on old plantations through so-called backward integration. The company claims these will create much needed employment and help Nigeria address its palm oil shortfall, which has seen the country become an importer of foodstuffs.

Opponents including local NGOs and community members, however, say the company’s acquisition is little more than a land grab, has caused environmental damage and seen people turned off their land and lose their livelihoods in areas such as Ibiae and Biase.

“At the local level Wilmar has engaged in deforestation and caused the pollution of local streams and water sources,” said Godwin Ojo, the executive director of both Environmental Rights Action (ERA) and Friends of the Earth Nigeria.

“Such global and capital investments are simply about making a profit for dividends. … It is a tool for land grabbing.” 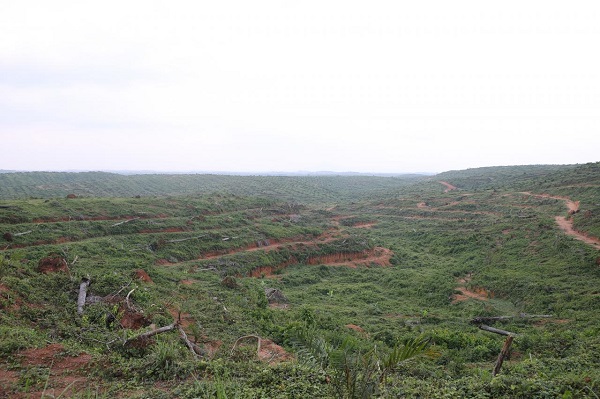 The area’s history and the presence of abandoned plantations means much of the land Wilmar aims to develop is already being used for agriculture by small-scale independent farmers. Ojo says many of them are being removed from their land and that the whole project exposes huge flaws in Nigeria’s land-tenure system which only increase the risk of the country’s high deforestation rate – nearly half a million hectares lost a year – continuing.

Local opposition and criticism of its operations has become a familiar refrain for Wilmar. The company has been similarly accused of displacing farmers and damaging the environment in its plantations around Lake Victoria in Uganda, while it regularly defends its vast operations in Indonesia as it seeks to fulfill the vast and ambitious terms of its global No Deforestation, No Peat, No Exploitation Policy it agreed to in late 2013.

As in Uganda, local communities are seeking legal recourse to air their grievances. Local NGO the Rainforest Resource and Development Centre (RRDC) has helped bring the case before the Federal High Court.

Odey Oyama, the RRDC’s executive director, says the two main issues for the court to consider are deals between the government and Wilmar which he says exclude local communities from their own land, and secondly whether the company properly carried out an Environmental Impact Assessment before commencing operations. Oyama says undertaking the case has placed him and his office under “great pressure” and subjected them to harassment.

Anne Van Schaik, a sustainable finance campaigner with Friends of the Earth Europe, which is supporting the court cases against Wilmar in both Nigeria and Uganda, visited the affected communities this month and participated in the inauguration of Cross River State’s branch of the Community Forestry Watch (CFW) program, which already has branches in several other Nigerian states and operates under constant threat and difficult circumstances.

Van Schaik says many residents and farmers are not intrinsically opposed to the project but feel Wilmar has broken a lot of promises.

“There are diverse demands from people,” she said. “The area is very poor and what a lot of people want above anything else is employment…but the only jobs offered are very poorly paid labor. While some want compensation for crops they have lost and [a] new water supply.”

Wilmar denies its operations have forced anyone from their land illegally. It claims rather that its significant investment – which it says is principally targeted at the domestic market – will help revive the country’s palm oil production capacity.

Although still Africa’s largest producer by volume, Nigeria has dropped in global significance from its heyday in the first part of the 20th century, and a combination of failed industrial expansion and a gradual switch to an economy focused on oil and gas revenues has seen the country become a net importer of palm oil and other commodities.

The government is trying to change this situation. Agriculture Minister Akinwunmi Adesina called on investors earlier this month to invest in crops such as palm oil, cassava and others, while a joint steering group formed by the government and the Group of 7 and named the New Alliance has laid out a roadmap based on private investment that would spark significant growth in the agriculture sector.

That such moves are needed and that such investment could be helpful in terms of creating employment provokes little opposition. Critics, however, are sceptical that plans will play out as forecast.

“Good intentions of the government in reinvigorating plantation agriculture does not automatically empower government to conduct business in violation of the rights of indigenous communities ,” said Oyama, the RRDC director.

Added Ojo, the ERA director, “The thing is, in its heyday when palm oil production was booming in Nigeria, it was not external forces. The reality is any idea for food production that does not involve local communities is bound to fail.” 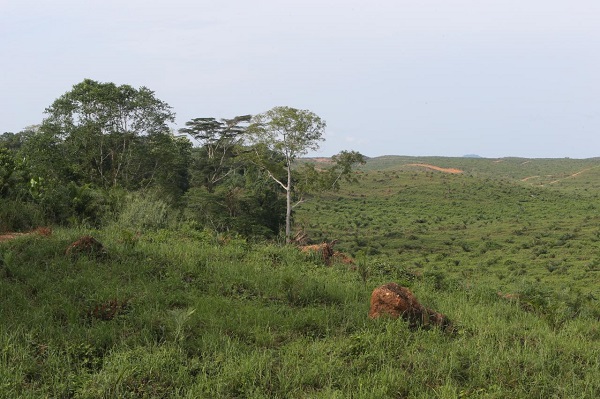