Researchers were in for a surprise when they viewed footage from a remote and little-explored area of southeastern Tibet. Within the more than 700 photos captured by their camera traps, they spotted several macaques with physical characteristics that hadn’t been documented before; namely, genitals that were shaped and colored differently than those of other known macaques in the region. These differences may make these macaques a new species, the scientists write in their study published recently in the American Journal of Primatology.

Photos of the newly described macaque, named the white-cheeked macaque (Macaca leucogenys) by the authors of the study, were captured in Modog county (sometimes spelled “Medog”) in southeastern Tibet. Modog lies within the eastern fringes of the Himalayan mountain range, bordered by India’s Arunchal Pradesh state to the south. The region boasts a wide array of habitats, from tropical forest to grassland to barren mountaintops, and is regarded as a biodiversity hotspot, but has not been extensively surveyed by scientists.

“It is an area where there’s been very little scientific exploration, partly because of political conflicts,” Paul Garber, executive editor of the American Journal of Primatology, told New Scientist.

To help shed a little light on what lives within Modog’s forests, researchers from institutions in China set up 31 camera traps in various places throughout the county that collected images for about six months in 2013 and 2014. They also recorded the calls of macaques. They then compared the images and calls to known records, finding some significant differences in several monkeys.

Genetic analysis has yet to be done.

For now, the entire known range of the white-lipped macaque exists within a protected area. However, the authors suspect it may be found elsewhere in the region. They also caution that local bushmeat hunting and the proposed development of hydropower stations in the area and subsequent human population influx may threaten its habitat. 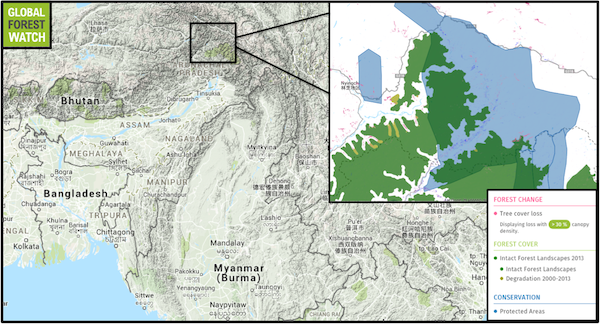 The known range of the white-lipped macaque exists within the Yarlung Zangbo Grand Canyon Nature Reserve (Yaluzangbudaxiagu) in southeastern Tibet. Its status as a reserve has protected the region from development somewhat, with Global Forest Watch data showing Yarlung Zangbo lost less tree cover than areas outside of it in the past 15 years. The reserve’s intact forest landscapes (IFLs), which are undisturbed areas of forest large enough to retain their original biodiversity, also experienced less degradation than outside its borders. However, the researchers worry future development may put the area and its wildlife at risk. Click to enlarge.

“Moreover, the government of China is planning to construct cascade hydropower stations in Modog including the locale where we photographed…M. leucogenys,” the authors write. “Construction of hydropower stations would result in destroying and flooding extensive areas of forest along the rivers, the potential habitat for white-cheeked macaques. The immigration of a large number of people into the area to construct the hydropower stations also will result in an increase in the bushmeat trade, deforestation, new roads, and the construction of housing for workers, all of which will have a negative impact on white-cheeked macaque conservation.”

Southeastern Tibet supports high biodiversity, according to the study, including many endemic, threatened, and possibly yet-to-be discovered species. It underlines the need for more research into this little explored, biologically important region.

“Discovery of white-cheeked macaques further highlights the immediate need for biodiversity conservation in this area along with more intensive surveys and studies to protect, manage, and conserve this important ecosystem,” the authors write.