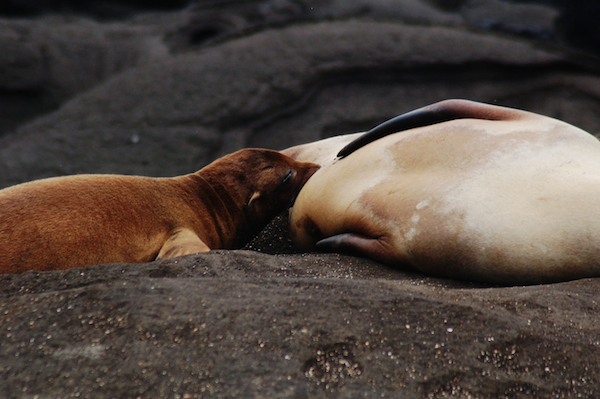 A Galápagos sea lion pup feeds. Male and female pups differ in how independently they forage for their own food, a new study shows. Credit: Peter Wilton / Wikimedia Commons

Young male Galápagos sea lions (Zalophus wollebaeki) have it made. They grow plump on milk from their mothers for their first two years and barely lift a flipper to hunt, new research from the Galápagos Islands shows. By comparison, young females are much more independent, providing many of their own calories by hunting at sea long before their mothers wean them. The results raise questions about the evolutionary costs for mothers of rearing such lazy sons.

Galapágos sea lion pups are a big investment. They rely on their mothers’ milk for two to three years, said ecologist and study senior author Fritz Trillmich of Bielefeld University in Germany. “Some suckle until they are six or seven years old” and have pups of their own, he told Mongabay.com. “It’s a very strange system.” These boomerang pups can even edge out their own younger siblings at their mother’s teat in years when seafood is scarce.

Having a son is particularly challenging. Male Galápagos sea lions outweigh females from birth. A growing boy needs extra calories from somewhere, and for decades marine biologists have assumed that sea lion mothers simply have to feed their sons more. But young sea lions also begin to forage for some of their own meals once they are about a year old. Trillmich hypothesized that young males might get their extra calories from their own hunting expeditions, significantly easing the strain on their mothers.

Trillmich and his colleagues glued tracking devices to the backs of young sea lions between the ages of one and two to measure their early foraging trips. The devices tracked how often and how deeply the young sea lions dove, as well as how far they traveled from home.

In a study published in the journal Animal Behaviour, the team found that even though both sexes were perfectly capable of diving for their food, females actually put considerably more effort into hunting than males. By the time they were a year old, 81 percent of females were diving regularly on their own, compared to only 46 percent of males. By age two, females ranged up to 30 kilometers (18.6 miles) from shore on all-day hunting trips, diving on average 100 times each day. In contrast, two-year-old males never ventured farther than 200 meters (219 yards) from the colony and spent only a fifth as much time diving. They seemed to prefer tussling with playmates on shore and waiting for mom to come home with dinner, Trillmich says.

The researchers also compared the diets of mothers and their offspring using chemical analysis of small skin samples taken from the animals’ hind flippers. The youngsters who spent more time at sea ate more seafood, like their mothers, while the homebodies fed mainly on milk. The team concluded that sea lion daughters get many of their calories from hunting while sons are happy to rely on their mothers’ milk.

The young males’ lack of interest in hunting was surprising, said Paolo Piedrahita, a graduate student in Trillmich’s lab who led the research team. “[Males] were expected to forage more because they need more energy to maintain their size,” he told mongabay.com. 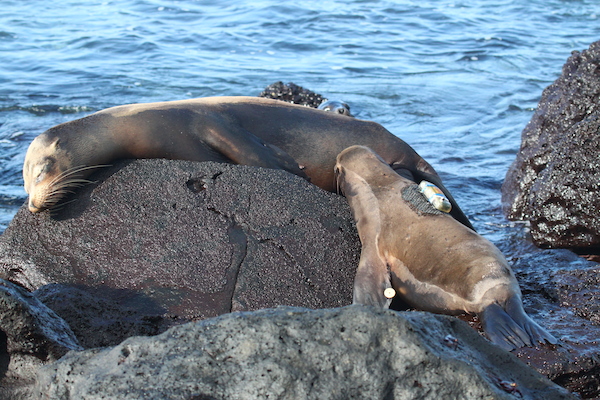 A Galápagos sea lion son wears a tracker as part of the study. Credit: Fritz Trillmich

The results show that a sea lion son is an even greater burden on his mother than researchers had realized. Mothers of sons would probably have fewer offspring over the course of their lives because they couldn’t feed a new pup while still supporting its older brother. This evolutionary sacrifice might help explain why Galápagos sea lions tend to have more daughters, Trillmich said, adding that in most other mammals the sex ratio of offspring is more even.

“Our next step is to understand this from the mother’s side,” Piedrahita said: Are sea lion mothers more permissive with their sons, or are sons more demanding?

The findings also demonstrate how sons and daughters can evolve different survival tactics, human evolutionary biologist Katie Hinde of Harvard University, who was not involved in the study, told mongabay.com. Males may focus on growing up big and strong while females spend their time learning to be good providers for their own future offspring, she speculated. “This is a fantastic, phenomenal paper for people interested in understanding infants or offspring as agents in their own development.”

Conservation biologists focus on the environmental conditions that determine how many pups threatened marine mammals can raise to adulthood, but few have looked at how male and female pups might contribute to their own survival, marine biologist Michael Castellini of the University of Alaska Fairbanks, who was not involved in the study, told mongabay.com. “I don’t think anybody’s ever asked that particular question before,” he said. There’s a lot of diving data on pups that no one has ever analyzed by sex, he said, including his own. “I probably will go back and look right now.”