Illegal logging in Indonesian Borneo. Photos by Rhett A. Butler

A seemingly well-intended law that aims to turn forests over to traditional users could instead lead to large-scale destruction of Indonesia’s native ecosystems, warns a prominent conservation biologist.

Writing in The Jakara Globe, Erik Meijaard of the Borneo Futures Initiative explores the potential implications of a proposed change to rules governing land tenure in Indonesia. The “joint regulation”, issued by several ministries last October, lays out “Procedures for the Settlement of Land Tenure in Forest Estate Land” as part of an effort to facilitate a 2013 Constitutional Court ruling on the rights of local communities to claim state forest land they’ve used traditionally as their own.

The problem, says Meijaard, is that once granted legal rights to forest land, some communities may immediately auction it off to the highest bidder, including palm oil, timber, and pulp and paper companies. Since state land includes conservation areas, it could potentially deliver a “final coup de grace” to Indonesia’s forests.

“What the new law means is that all forest land, including protection forests and conservation areas, will be reconsidered in regard to local community land claims. Any forest estate land that has been “controlled and exploited” by the community for 20 consecutive years or more, has to be released from the forest estate. So what was previously land under the jurisdiction of the government can now be legally claimed as theirs by local communities,” explains Meijaard. “Call me a cynic, but to me this sounds like an excellent plan to convert remaining forest lands into agricultural land.”

“Realistically, what will communities or individual people do when they can get legal title to what was previously state owned land? Your guess is as good as mine, but I would think many will immediately sell their land to whoever is the highest bidder: likely industrial-scale companies investing in oil palm, pulp and paper, rubber, and mining.” 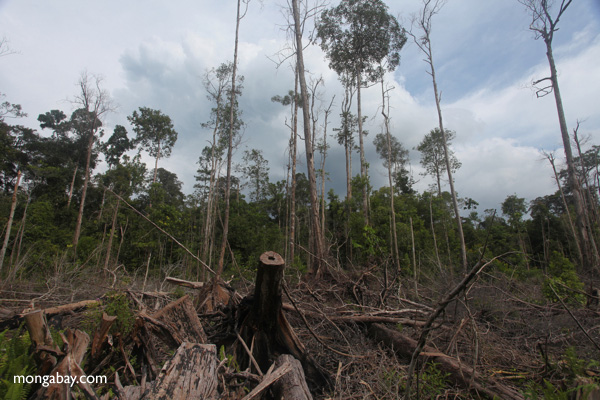 Area of forest cleared by a community for jungle rubber.

Meijaard says that communities with strong ties to their traditions may choose to preserve forests for the benefits they afford. But it may be a different story with other communities.

“Some local people will hang on to their land and use it for their own farming activities, but this is most likely in remote closely-knit communities with strong leadership, who work with technical assistance from NGOs,” he writes. “In my experience, in the many more loosely organized communities, those community-members with the best connections and most power will lay claim to most lands, either directly or through proxy claimants.”

Meijaard goes on to cite examples where forests have been turned over to communities only to be deforested or sold once legal tenure is transferred.

“A similar example of poorly guided decentralization of forest management can be found in the post-Suharto initiative to allow district heads to allocate 100-hectare timber licenses to communities under a scheme known as HPHH. This turned out to be a wonderful tool for driving massive illegal logging, with most revenues ending up in the pockets of logging bosses who could finance the process,” he writes.

“It is therefore highly questionable whether this new law will indeed benefit the poorest community members and effectively stimulate rural development. More likely it will just result in the concentration of both capital and income in the hands of an ever-smaller elite.” 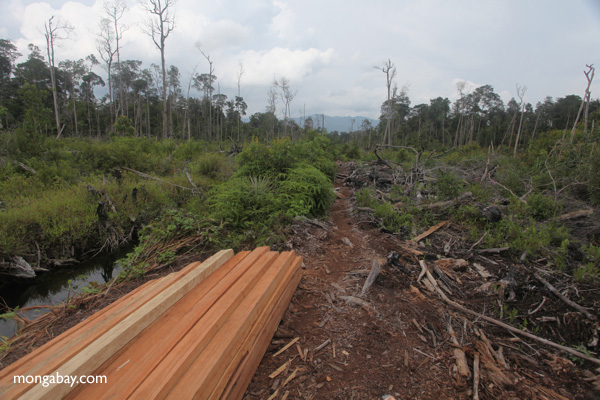 Meijaard predicts that protection forests and conservation areas will most likely be affected by the proposed change.

“These new community lands will be located in those forests that no one can use at the moment: protection forests, nature reserves, and other forest lands without direct commercial functions,” Meijaard writes. “The new law is certainly not clearly stating that such “protected” forests cannot be allocated to communities.”

Meijaard concludes that Indonesia will need to step up law enforcement if it hopes to avoid complete devastation of its remaining forests.

“Ultimately clear laws are needed — and their enforcement. The Ministry of Environment and Forestry should seriously prosecute companies AND communities for illegal environmental damage that they cause to forests. If not, Indonesia will soon look like Bangladesh, the Philippines or other disaster-prone countries that have failed to protect their environments.”