These charming bivalves of tropical reefs have myriad purposes, but just how many and to what extent are now more easily knowable

The world’s biggest bivalves are the aptly named giant clams. Inhabiting the warm waters of the Indo-Pacific, the largest of these species, the eponymous giant clam (Tridacna gigas), can reach up to 1.2 meters (4 feet) in length and weigh over 230 kilograms (500 pounds). Historically known as the killer clam for its supposed ability to trap careless divers, these harmless and colorful bivalves are favorite animals for divers and snorkelers to spot, but they may also be big players in the ecosystem.

Giant clams, regardless of species, are among the most immediately recognizable animals on coral reefs, yet their ecological roles in these complex ecosystems have not been studied in depth. Realizing this, both Mei Lin Neo and Peter Todd of the National University of Singapore recently released a paper to bridge the gap.

Trawling through nearly 500 published papers covering over ten years’ worth of research, their study is the first to quantify and highlight the many roles of this charismatic marine animal.

From reef backbone to food

All organisms contribute differently to their ecosystems from birth to death, and it is no different for the giant clam. Young clams grow quickly compared to corals, the other primary producers of a reef. Depending on clam and coral species, this rate can range from twice to 75 times as quickly as corals. In the Tatakoto Atoll of French Polynesia alone the population of small giant clams (Tridacna maxima) is capable of producing an astounding 238 kilograms of dry weight per hectare per year (212lbs/ac/yr) of biomass.

Of course, many of these young clams fall prey to predation. At least 75 animals are known to rely on these bivalves as a food source, whether as recently-released gametes (sperm and eggs) or as juveniles. Even fish occasionally nip chunks off the mantles of adult clams, though the giant clams’ expulsions of zooxanthellae and nutrient-rich feces likely make more significant dietary contributions to reef fish.

However, giant clams also serve as shelters for a wide range of animals. Dense aggregations of the bivalves are fish nurseries while the shells themselves are home to many different encrusting and burrowing reef animals. On the shells of just eight fluted giant clam (Tridacna squamosal) individuals in Singapore, researchers found at least 49 species of organisms.

Unfortunately, there is no data yet that shows how effective giant clams are as surfaces compared to other reef creatures such as corals.

Still, Peter Todd said: “Even though corals and sponges represent lots of surface area – these are living tissues and hence cannot be colonized by other organisms. The shells of giant clams are not living and are an excellent substrate for many other species.”

Giant clams also release discharge large amounts of zooxanthellae in their fecal pellets, in several orders of magnitude higher than that of corals. As giant clams protect and provide the zooxanthellae within them with rich sources of nitrogen, releasing them into the coral reef ecosystem thereby provides other zooxanthellae-dependent organisms with fresh and abundant sources of the plankton. Some animals depend on zooxanthellae for food, such as the black damselfish (Neoglyphidodon melas), others for symbiotic purposes, such as corals, jellyfish, and sea anemones.

Finally, an increasingly important role of giant clams in our seas is counteracting eutrophication. Adult giant clams have an immense capacity for filtering water. A sparse population of mature giant clams (Tridacna gigas )on the Great Barrier Reef, for instance, is capable of filtering over 28,000 liters per hectare per hour (3000gal/ac/hr). Depending on the species, they also ingest 51 percent to 88 percent of the algae present in surrounding seawater. These two actions combined help combat algal blooms. 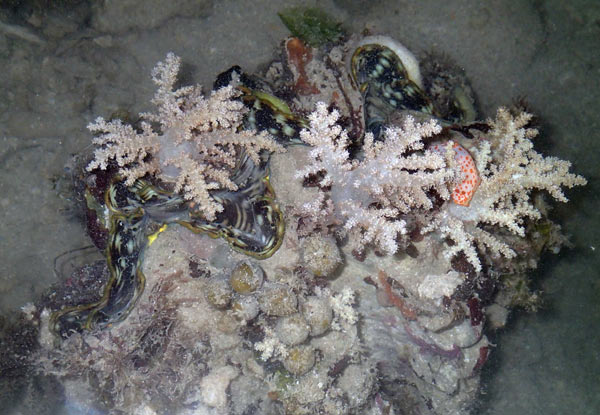 Neo and Todd do not claim that giant clams are crucial to coral reefs, but argue, instead, that they warrant special conservation attention due to their positive contributions. Their paper notes that when clams were transplanted into degraded patch reefs in the Philippines, organisms such as anemones, soft corals, and sponges increased their coverage from 2 percent to 14 percent within three months. Control plots—with no clams–remained unchanged. Fish species abundance and richness likewise increased significantly in this timeframe.

It is therefore crucial, according to the researchers, that we consider giant clams, especially with new species being discovered. As current CITES and IUCN data on giant clams out-dated and therefore potentially misleading, and with their fame and additional draw as tourist attractions, working to save giant clams might just very well serve to save the reefs they live in.