Even with no El Nino, 2014 was the warmest year on record 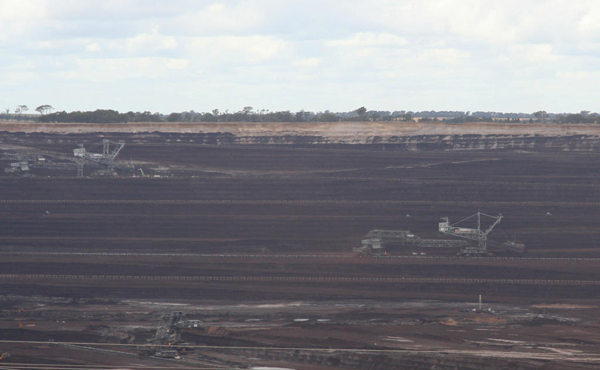 Massive coal mine in Australia for the Loy Yang Power Station. Coal is the world’s most carbon intensive fuel source and scientists say much of it must be left unexploited to avoid catastrophic, global impacts. Yet, governments, such as Australia, continue to whole-heartedly support the coal industry. Photo by: Marcus Wong Wongm.

It was no surprise, but on Friday both NASA and NOAA announced that last year—2014—was the warmest on record. The year bested out both previous record holders, 2005 and 2010. According to NOAA, 2014 was 0.69 degrees Celsius (1.24 degrees Fahrenheit) above the 20th century average. The Earth is warming rapidly due to greenhouse gas emissions, mostly from burning fossil fuels such as coal, oil, and gas, but also from deforestation and industrialized agriculture. In just over a hundred years, the planet has warmed 0.8 degrees Celsius (1.4 degrees Fahrenheit) with some areas—like the Arctic—warming far faster.

“The evidence is so strong I don’t know why we are arguing any more. It’s just crazy,” Don Wuebbles, an atmospheric scientist at the University of Illinois told the Guardian.

Even though 2014 is described as the warmest year on record, which means going back to 1880, Wuebbles says proxy data shows that 2014 was probably the warmest in the last few millenia.

“We can safely say it’s probably the warmest year in 1,700 and 2,000 years, and I think it’s probably safe to say 5,000 years,” he noted. “You have a continuous upward trend over the last century and that is telling us something. We have a clear signal that our climate is changing, and when you look at the evidence it’s because of human activities.” 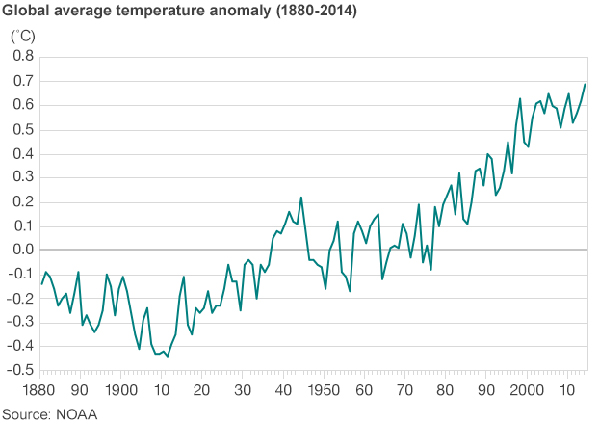 This is all the more remarkable, because 2014 was not an El Niño year. Nearly all previous record holders—including 2005, 2010, 1998—were El Niño years. El Niño refers to warm ocean temperatures persisting in the central Pacific Ocean, a cyclical trend that leads to shifting weather patterns worldwide, including warmer temperatures overall. La Nina, the opposite of El Niño, is when these ocean waters are colder than usual instead of warmer.

This doesn’t mean that 2014 was the hottest at every place on the planet. Parts of the eastern U.S. were colder-than-average last year, largely due to extreme fluctuations in the jet stream, which some scientists believe may actually be connected to global warming. But Europe had its warmest year in 500 years, and warming was also evident across both Africa and Asia, with permafrost melting away in Russia. California experienced its warmest year on record—and unbroken drought—while Alaska also roasted. Moreover, much of the oceans showed intense warmth throughout the year—though never quite enough for an El Niño.

“This is the latest in a series of warm years, in a series of warm decades,” said Gavin Schmidt, director of NASA’s Goddard Institute of Space Studies (GISS). “While the ranking of individual years can be affected by chaotic weather patterns, the long-term trends are attributable to drivers of climate change that right now are dominated by human emissions of greenhouse gases.” 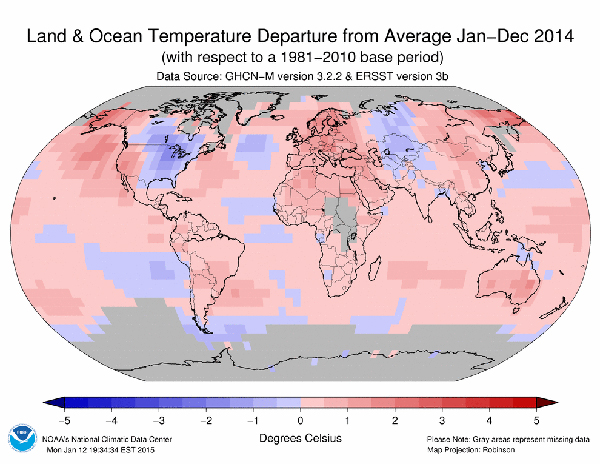 Global temperatures in 2014 compared to a 1981-2010 baseline. Red means warmer than the avergae during the baseline, blue means colder. Overall, 2014 was the warmest year on record and possibly the warmest year in 5,000 years. Photo by: NOAA.

Indeed, the ten warmest years on record have all occurred since 1997 with the most recent decade—not surprisingly—the warmest on record.

Global warming is impacting the planet in a variety of ways, including vanishing Arctic sea ice, melting glaciers, rising sea levels, worsening droughts and floods, and imperiling some species. As the planet warms further though scientists warn of possibly drowned islands, large-scale human migrations, mass extinction, and increased warfare and violence. Yet, to date, political leaders have done little to curb the constant growth in greenhouse gas emissions. Still, there is hope of a new climate agreement next year in Paris after last year saw joint pledges from China and the U.S., the largest greenhouse gas emitters.

“We expect that heat records will continue to get broken—not everywhere and not every year—but increasingly, and that does not bode well for a civilization that is continuing to add greenhouse gases to the atmosphere at an increasing rate,” said Schmidt. 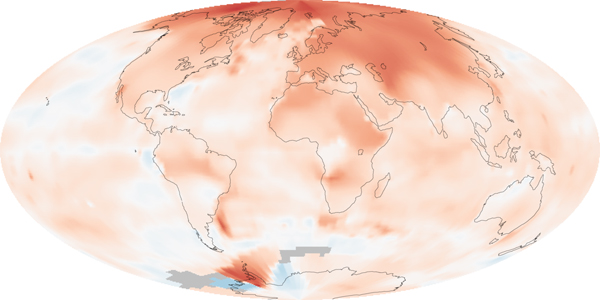 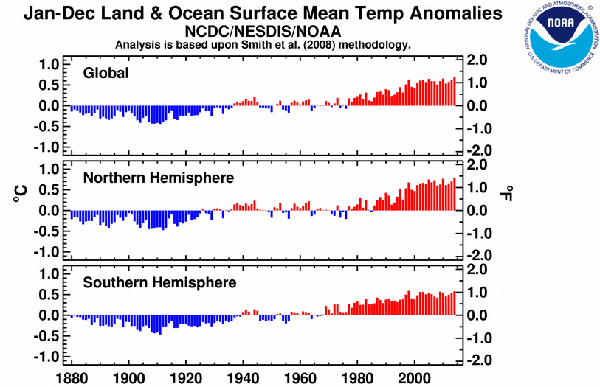