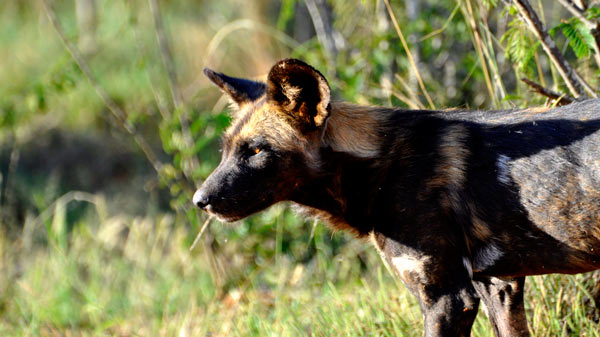 An African wild dog scans the bushland for prey. Photo Credit: AT Ford

Crisp lines of light begin to play out across the landscape. As the morning light grows, blades of grass take shape and, amongst rocky outcrops, green acacia breaks the yellow and gold of the savannah. Stirring in this early morning atmosphere is the African impala (Aepyceros melampus), an ungulate that typically grazes at dusk and dawn. Herd bound, the impala move largely as one staying in the open and in eye-sight of one another. Bowing their heads to graze and keeping to the edges of densely growing acacia to dine on fine greenery. To the average on looker, it may appear that an impala is simply following its stomach. However, to post-doctoral Researcher Adam T. Ford of the University of British Columbia, the impala’s routine is more complex.

In his recently published research in the journal of Science, Ford and his collaborators utilized GPS data gathered from collared impala, and two of their predators African wild dogs (Lycaon pictus) and leopards (Panthera pardus) to understand how these mammals influence the distribution of two species of acacia. One these acacia is covered in thorns to deter herbivores such as impala, but the other acacia is less well defended.

Ford explained that there is more to this relationship than herbivory deterrence: “impala behavior is focused on avoiding predation. In places frequented by predators, impala avoid bushy areas and the resident acacia is less thorny. On the other hand, herbivory is more intense in areas less frequented by wild dogs and leopards and the acacia is covered in larger thorns.”

What sparked this investigation was a relatively simple observation.

“During my time in the field collaring impala and their common predators, wild dogs and leopards. I noticed that impala tended to avoid eating inside stands of acacia trees,” Ford told mongabay.com.

The research team recognized evidence of Impala eating on the fringes of acacia stands but rarely venturing deep inside. Instead, they aggregated in naturally open areas or glades made from old cattle corrals.

This observation led the research team to investigate compare GPS data of collared Impala and its predators to satellite imagery of their surrounding habitat. Predation, as it turns out, is an important element in defining habitat.

Thus, where plants throw down roots is directly influenced by the relationship between predator and prey. If predation is intense then plants benefit from that ‘defense’ and grow fewer thorns. On the other hand, if predation is limited. “Plants respond through self-reliance and in this case being thorny is successful.” Noted Ford.

However, predation is an element that is facing decline.

“As large-carnivore populations continue to decline globally, understanding the context in which predators shape key ecosystem processes is an urgent priority,” wrote Ford and his collaborators.

“Studies integrating risk of predation and plant defenses will constitute a major step forward toward this goal.” 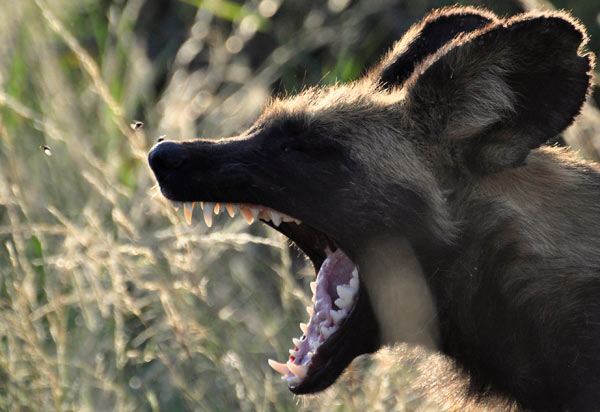 An African wild dog yawns in the afternoon sun. Impala face a hard choice – the must avoid the teeth of the predators like African wild dogs, and the thorns and noxious chemicals of their food. Photo Credit: AT Ford 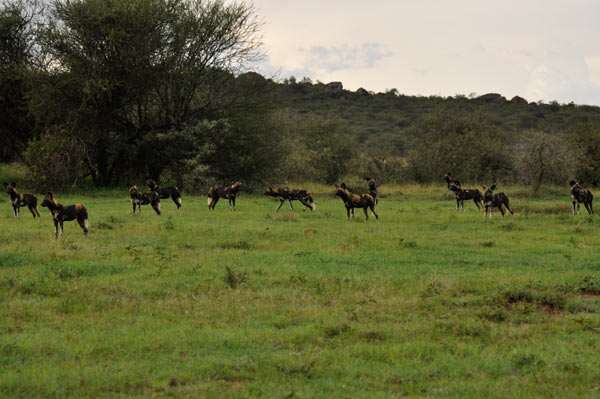 The Loisaba pack of African wild dogs stages in a meadow before their evening hunt. The dogs prefer to hunt for prey, like impala, in the bushy areas of the landscape. Photo Credit: AT Ford

(11/04/2014) Over 70 years since the last gray wolf was killed in Grand Canyon National Park, the top predator may be back. Tourists have reported numerous sightings—and taken photos—of a wolf-like animal roaming federal forest land just north of the park. Agents with the U.S. Fish and Wildlife Service now intend to capture the animal to determine if it is indeed a wolf or perhaps a wolf-dog hybrid.