What happens to degraded pastureland once the cows are kicked out? After years of letting the area rest, does it eventually become what it once was? Not likely. When disruptions such as invasive species and human interference are introduced to an area, ecological succession doesn’t occur the way it should naturally.

In these cases, sitting back and watching the succession “show” isn’t a good option. Instead, reforestation requires human intervention and biologists are still trying to determine the best way to help tropical trees take root. Pasture meets gallery forest in the Brazilian Amazon. Photo by: Rhett A. Butler.

In a recent study published in mongabay.com‘s open-access journal Tropical Conservation Science , researchers looked at whether or not native grass limits tropical forest restoration in a way similar to alien grass.

About one third of all deforested areas in Brazil are currently occupied by low intensity pasture for cattle, the leading driver of deforestation in the country. However, when pastures are abandoned, they present a unique conservation opportunity. Because of low opportunity costs and a rise in enforcement of environmental laws in Brazil, abandoned pastures are increasingly repurposed for restoration projects.

Initially, these pasturelands are occupied by different grass species; this proves to be a big problem for forest restoration. Grasses are excellent competitors against tree seedlings for water, light, and soil nutrients. Couple these competitive grasses with the Amazonian reddish clay soils that are notorious for their lack in nutrients to begin with, and you have some problematic conditions for planted tree seedlings. 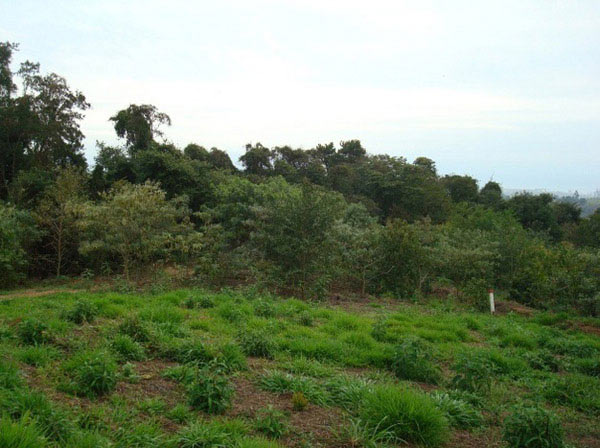 Still, little is known about how different grass species affect forest restoration, so using a pasture under restoration in Brazil, biologists set out to find some answers.

The study was conducted by analyzing the effects two grasses on tree seedlings. One was satintail, a native grass that naturally occurs in Brazil, and the other, molasse grass, a widespread exotic grass used as cattle fodder.

The results showed that both grasses, regardless of being native or exotic, similarly affected the survival and growth of planted tree seedlings along with the number and density of tree seedlings that sprouted naturally in the pasture.

However, according to the authors of this study, “the most interesting result was that tree seedling species in both grasses differed, indicating that there may be certain tree species that are more fit to overcome the competition with specific grass species.” Amazon rainforest and cattle pasture. Photo by: Rhett A. Butler.

Discovering this sort of knowledge is like striking gold in the conservation world. If biologists can better develop their knowledge of which tree species work best in overcoming specific grass species, conservationists may finally be able to break down a long contended barrier with using abandoned pasturelands for forest restoration projects.

“Thus, restoration projects in abandoned pasturelands can benefit a wider array of woody species if both native and invasive grasses are managed to facilitate woody individual regeneration,” the authors conclude.

Forests could be a thrifty way to fight ozone pollution

(12/16/2014) Planting trees may be a cost-effective way to reduce ground-level ozone, a toxic component of smog that contributes to the deaths of about 152,000 people annually worldwide, according to new research. The study is the first to lay out a practical plan and examine the economic impacts of lowering ozone levels with trees.

(12/07/2014) A coalition of governments and organizations today pledged to restore 20 million hectares (50 million acres) of degraded forests and ecosystems across Latin America by 2020 under an initiative that aims to curb boost rural incomes, fight climate change, and increase agricultural production. The effort is backed by $365 million from five impact investors.

(11/14/2014) Jadav “Molai” Payeng is a 51-year-old man who lives in India’s north-eastern state of Assam in the village of Aruna Chapori. A member of Assam’s indigenous Mising tribe, Payeng is better known as the “Forest Man” for spending the last 35 years planting a forest bigger than New York City’s Central Park.

(11/13/2014) Jadav “Molai” Payeng resides in northeast Assam’s Jorhat district in the village of Aruna Chapori. Here, for the past 35 years, he has worked to plant trees on a sandbar island in the river near his home—and in the process, single-handedly established a forest larger than New York City’s Central Park.