Baby sea turtles vanish after they scamper into the ocean. Years later, juvenile turtles may pop up thousands of kilometers away, but often scientists don’t see them again until they return to their birthplaces to nest on the beach. Now, using tiny tracking tags weighing no more than two watermelon seeds, a team has followed newborn loggerhead turtles during their first critical hours at sea, revealing how they evade predators and hitch rides on the ocean’s currents.

The satellite tags used by marine biologists to track whales, sharks, and adult turtles are much too large to attach to baby turtles. This has forced biologists to use computer models to simulate where hatchlings may drift during their first few days at sea. But the models aren’t very detailed, and they ignore winds, tides, and how vigorously the turtles themselves might paddle. 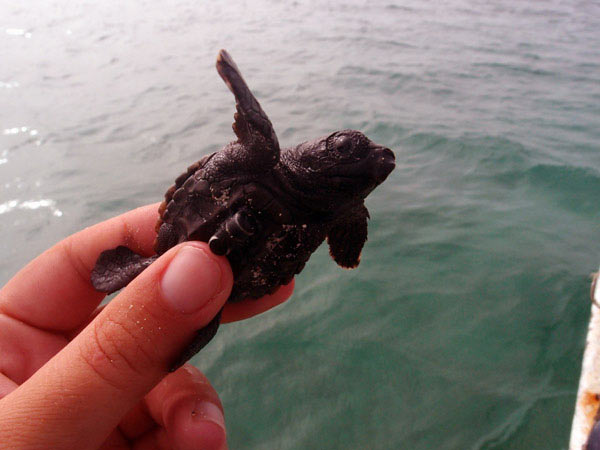 A new study, supported by The Future Ocean, GEOMAR, QMUL and Turtle Foundation, tracked newborn loggerhead sea turtles, all populations of which are endangered or threatened. The streamlined, lightweight tags did not affect how the turtles swam. The tags fell off after a few days. Credit: Rebecca Scott.

In the new study, a team led by marine biologist Rebecca Scott of the GEOMAR Helmholtz Centre for Ocean Research in Kiel, Germany, used acoustic transmitters weighing just 0.65 grams (0.02 ounces) each. They glued these “nano-tags” to the shells of 11 newborn loggerhead sea turtles (Caretta caretta) on Boa Vista, a Cape Verde island off Africa’s western coast. The team then closely trailed the newborns with a small boat for up to eight hours, following the pings of the transmitters.

After two to five hours of rapid paddling, the loggerheads caught fast surface currents about five kilometers (three miles) offshore and surfed along at up to 60 meters (200 feet) per minute as they travelled out to sea. Scientists had guessed hatchlings used currents to drift, but no one had directly recorded it happening. The team published its findings last month in the Proceedings of the Royal Society B.

“This is a highly innovative study. Few have tracked hatchlings at sea and never with such small transmitters,” said sea turtle expert Brendan Godley of the Centre for Ecology and Conservation at the University of Exeter, U.K., in an email to mongabay.com. “Tracks were of limited duration and distance, but like the massive odyssey of the hatchlings, all journeys start with small steps.” 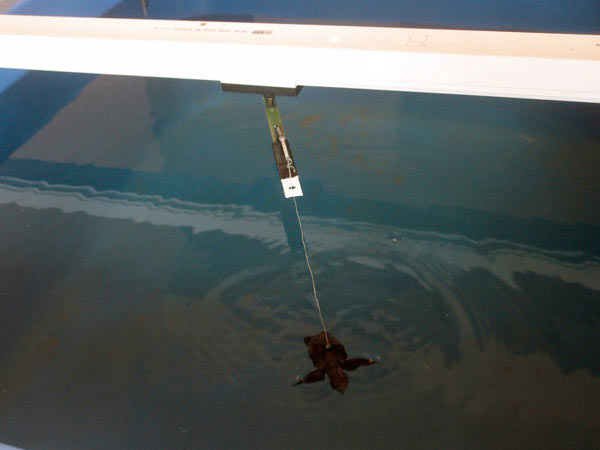 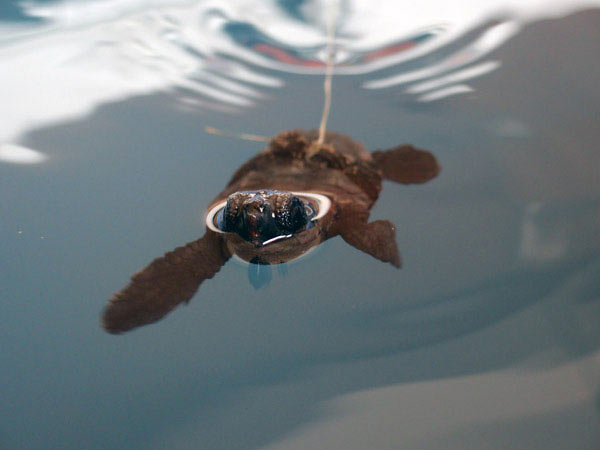 Researchers fitted newborn hatchlings with lycra harnesses and placed them in water-filled containers. When the turtles paddled strongly with their front flippers, they pulled on the harness and activated a switch, recording the amount of time each turtle swam. Credit: Rebecca Scott.

Scott’s team also studied how baby loggerhead sea turtles swam in laboratory tanks to build a complete picture of their first days at sea. The captive hatchlings paddled 78 percent of the time during their first 24 hours of life. This “swimming frenzy,” a previously documented behavior, helps them escape coastal predators. But the team also noted a new behavior. After the initial frenzy, the turtles nodded off at night and only swam during the day.

“When they sleep, they look like a little leaf. They tuck themselves up and float at the surface,” said Scott in an interview with mongabay.com. “They will be far less likely to attract a predatory shark or fish.”

Biologists in Florida have reported that captive loggerhead hatchlings only rest during part of the night. But those turtles must swim much farther than the Boa Vista babies to reach the fast Atlantic currents off Florida’s coast. 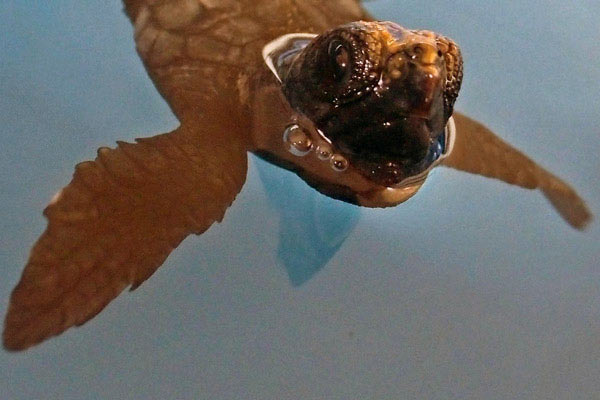 Many hatchlings don’t survive the trek to fast-moving ocean currents. Scott even had to jump into the ocean to rescue tagged turtles from lurking predators. Only about one turtle in every 1,000 hatchlings return as adults to breed. Credit: Rebecca Scott.

“The turtles in Cape Verde seem to be born knowing that they don’t have to travel as far to reach the currents they rely on,” noted Scott.

With the new results, said Scott, scientists can incorporate local hatchling swimming behaviors into their models of ocean currents. The revised models should do a better job of predicting where the babies will drift, she said. Scott hopes the travel patterns of young loggerheads will help explain why adults appear where they do, years later.

Scott also urges her colleagues to study the effects of climate change on the sizes of hatchlings. New research suggests that as temperatures rise, newly hatched turtles will be smaller, on average. Scott’s study showed that larger newborns swam for more hours than smaller ones. These early signs point to a potential problem, she noted: climate change may make it harder for hatchlings to reach fast currents safely.

Leigh Cooper is a graduate student in the Science Communication Program at the University of California, Santa Cruz.

(10/07/2014) Marine conservationists often view fisheries as an enemy of sorts, vacuuming up fish with little thought to the long-term consequences and using equipment that also ends up killing other species, i.e. bycatch like sea turtles and marine birds. However, Joanna Alfaro Shigueto, the President of the Peruvian NGOProDelphinus and winner of a 2012 Whitley Award, has chosen a different tact.

(06/11/2014) A recent survey conducted by researchers from the U.S. and Mexico has uncovered staggering levels of biodiversity in the delicate desert environment of Cabo Pulmo in Baja California. Their findings have stymied construction of a proposed $3.6 billion resort, but developers are not giving up.