Indigenous leader murdered before he could attend Climate Summit

Known for his opposition to Chinese mine project, indigenous leader found bound and buried in Ecuador

Days before José Isidro Tendetza Antún was supposed to travel to the UN Climate Summit in Lima to publicly file a complaint against a massive mining operation, he went missing. Now, the Guardian reports that the body of the Shuar indigenous leader has been found, bound and buried in an unmarked grave on the banks of the Zamora River. A well-known leader of the local Shuar communities, Tendetza Antun was also a vocal critic of a Chinese-operated Mirador mine in Ecuador’s remote, and hugely biodiverse, Cordillera del Condor region.

Indigenous leaders believe Tendetza Antún was murdered for his activism against the Mirador project.

“His body was beaten, bones were broken,” another Shuar leader, Domingo Ankuash, told the Guardian. “He had been tortured and he was thrown in the river…This is a camouflaged crime. In Ecuador, multinational companies are invited by the government and get full state security from the police and the army. The army and police don’t provide protection for the people, they don’t defend the Shuar people. They’ve been bought by the company.”

Ankuash said that before the murder, unnamed assailants had already destroyed Tendetza Antún’s house and burned his farm to the ground. The Shuar are the second largest indigenous group in Ecuador, which in recent years has been viewed as backpedaling on environmental protections and indigenous rights.

Sitting in what is believed to be one of the most biodiverse places on the planet, the Mirador open pit mine would result in the destruction of nearly 10,000 hectares of forest for mostly copper, but also gold and silver. The planned mega-mine is considered one of the largest untapped copper deposits in the world and is expected to deliver 2.9 million tonnes of copper in total if exploited.

According to the Global Forest Watch, 96 percent of the Zamora-Chinchipe Province was covered in forest in 2000, totaling over a million hectares of forest. Between 2001 and 2012 the province lost 16,320 hectares from 2001 to 2012 when analyzing ten percent forest cover. This equals a total loss of 1.5 percent during the twelve years studied.

Forest loss across the whole state of Ecuador was similar. The country lost more than 450,000 hectares of forest between 2001 to 2012, representing a total loss of 1.7 percent during the twelve years at the ten percent forest cover level. The Latin American country is covered in over 25 million hectares of forest. 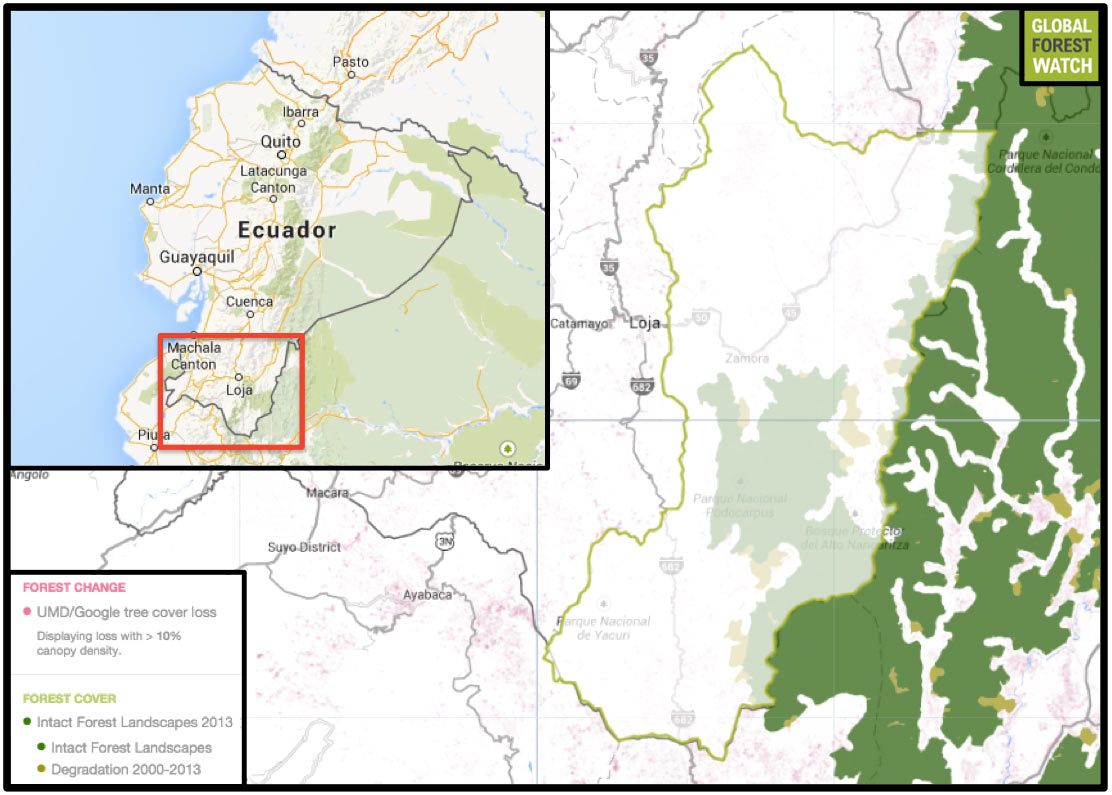 The Mirador mine project was originally operated by a Canadian company, Ecuaorriente (ECSA). But in 2010, the company was purchased by the China Railway Construction Corporation and the Tongling Nonferrous Metals Group Holding Company. Ecuador granted the project an environmental license in 2012 including a 60 operating lease.

The Environmental Impact Assessment found that if allowed to go ahead the six planned open mines could results in the extinction of three frogs–the Kingsbury’s rocket frog (Allobates kingsburyi), Pristimantis incomptus, and Pristimantis rhodostichus–and one reptile: the red-throated wood lizard (Enyalioides rubrigularis).

Local communities are also concerned about the threat of water pollution from mine waste.

Tendetza Antún disappeared on November 28th on his way to a meeting with government officials regarding the Mirador mining project. He was scheduled to leave for the UN Climate Summit in Lima on December 2nd where he would have filed against the mining project at the Rights of Nature Tribunal organized by NGOs. But he never showed up. His body was found in an unmarked grave on December 4th and identified by his son via photographs.

This morning in Lima, the Ecuadorian sub-secretary for the environment, Andres Hubenthal, said the government would conduct a thorough investigation into Tendetza Antún’s death.

Risks appear to be rising for indigenous leaders and environmental activists. A report earlier this year found that 908 environmental activists had been murdered between 2002 and 2013, though many unstable countries were left out of the accounting due to a lack of data. Earlier in the year, four indigenous leaders, including internationally known Edwin Chota Valera, were assassinated in Peru, allegedly for opposing illegal logging on their land. 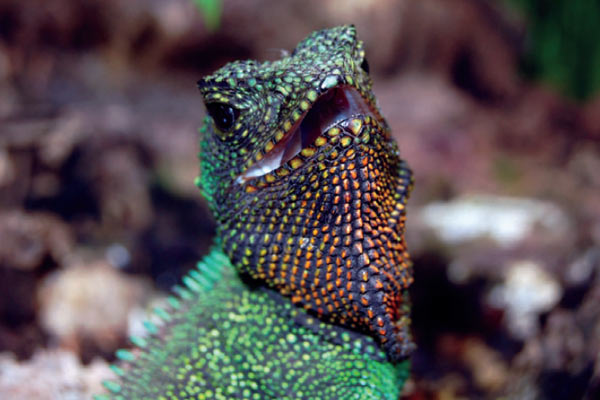 The red-throated wood lizard (Enyalioides rubrigularis) was described in 2009, but may go extinct if the Mirador mine goes ahead. Photo by: O. Torres-Carvajal et al. 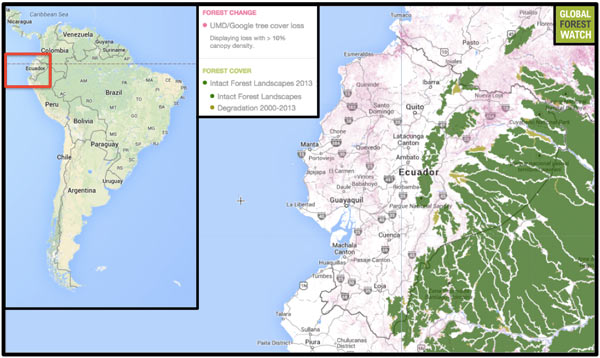 (12/05/2014) The Sarayaku, a Kichwa indigenous people numbering 1,200 from the Ecuadorian Amazon, won a historic court case in 2012. The Inter-American Court of Human Rights ruled that the government of Ecuador must publicly apologize, consult with, and recompense the Sarayaku for allowing oil exploration by Argentine Compañia General de Combustibles on their territory without prior consultation

(12/04/2014) A new short film documents the journey of an indigenous tribe hiking deep into their territory in the Peruvian Amazon to encounter a mysterious stone countenance that was allegedly carved by ancient peoples. According to Handcrafted Films, which produced the documentary entitled The Reunion, this was the first time the Rostro Harakbut has been filmed.

(11/26/2014) If you have ever wondered about the connection between hallucinogenic frogs, uncontacted peoples, conservation, and climate change — and who hasn’t? — check out this TED talk from ethnobotanist Mark Plotkin. An ethnobotanist by training, Plotkin serves as President of the Amazon Conservation Team. Plotkin took a few minutes from his busy schedule to answer a few questions from Mongabay.