Enough for an elephant: why are Cameroon’s elephants raiding fields?

Waza National Park in West Africa is a refuge to many endangered and vulnerable species. Walk through the grounds and you may see red-fronted gazelles grazing or giraffes sauntering between trees in search of foliage. Head to the park’s perimeter, though, and you may see a less serene scene: elephants raiding local farmers’ crops.

Every time the dry season sets in, about half of the park’s 496 African elephants (Loxodonta africana) break out to search for food. Many of them come into conflict with people. After grazing through farmlands, the migrant elephants move on to Kalamaloué National Park.

To find out if the elephants are leaving because of inadequate food supply, researchers from the University of Dschang, Concordia University, World Wildlife Fund, and the North Carolina Zoological Park took an important first step: they measured the amount of edible plants available to elephants in Waza National Park. Their study was published in mongabay.com’s open access journal, Tropical Conservation Science. 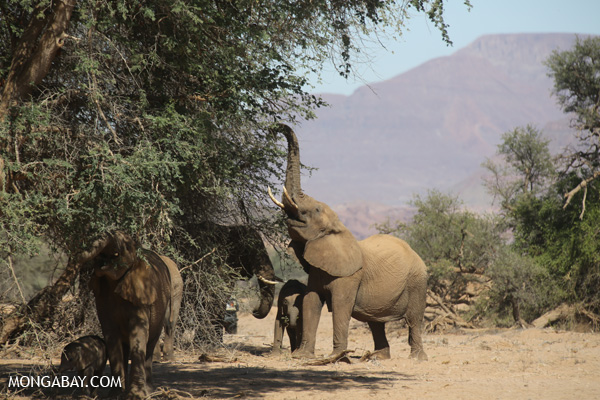 Alephants feeding in Namibia. Photo by Rhett A. Butler / mongabay.com

The herd’s behavior may already be a sign that there isn’t enough food to sate the population. The study’s authors write that, “with an estimated population just below 500 individuals combined with seasonal migration patterns showing only about half of the elephant population remaining permanently in the park, there may already be a mismatch between the elephants’ population size and their habitat…”

To find out for sure, researchers measured the aboveground mass of the park’s plants, taking into account every section of the trees and herbaceous plants that an elephant could consume. They divided the park into three vegetation zones: woodlands, floodplains, and acacia tree shrubland zones. The woodlands had the most trees while the floodplains had the most herbaceous plants. Across the whole park, the researchers estimated that there were just under 14 tons per hectare of dry, aboveground plant material available for eating, with most of the vegetation growing in the woodland zone.

Whether or not that’s enough food for 496 elephants still isn’t clear. But just because nearly 14 tons of vegetation exists in the park doesn’t mean that elephants can easily claim that resource. There are other herbivores in the area, after all, and plant growth fluctuates due to fire, soil quality, and water availability.

A worthwhile elephant management program, the authors warn, must take those influential factors and food supply into serious consideration.

“To manage Waza National Park’s habitat properly,” the study reads, “habitat conditions must be improved to enable the elephant population to acquire most of its forage from natural feeding sources inside the park, rather than turn to croplands adjacent to the park.”

Shortly after Waza was recognized as a National Park 1968, the native people who lived in its forests were relocated to its edges with the aspiration that they would deter poachers. Yet poaching remains a major threat, as Waza’s elephant population dropped from 1,100 animals in 1995 to 496 in 2010. Still, the farmers on the park’s perimeter can play an important role in protecting the elephants, according to the study, which is why minimizing conflict between the two is essential.

The authors even suggest that building a wildlife passageway between Waza and Kalamaloué National Parks may be a viable conservation strategy, writing that, “incorporating both Waza and Kalamaloué national parks linked by a ‘corridor’ including areas south of Waza will benefit both elephants and humans, and will ensure the sustenance of a healthy elephant population in Waza National Park for the future.”

(11/26/2014) In keeping with recent efforts to ramp up action against environmental crime, INTERPOL has highlighted nine fugitives for breaking laws related to illegal logging, poaching and the wildlife trade, illegal fishing, and waste dumping, among other crimes.

(11/19/2014) Northeastern India boasts nearly 44 percent of the country’s dense forests, and contains one of the most biodiverse areas in the world. However, the region lost approximately 548,440 hectares of tree cover—more than 3 percent—from 2001 through 2012. Sonitpur, Assam, has been particularly hard hit as people flooded into the area and cleared forest.

(11/18/2014) Northeastern India is part of the Eastern Himalaya biodiversity hotspot, one of the megadiverse areas of the world. The region boasts more than 60 percent forest cover, compared to the 15 percent for India as a whole. However, not all is pristine when one visits areas designated as forest on the map.

(11/14/2014) Jadav “Molai” Payeng is a 51-year-old man who lives in India’s north-eastern state of Assam in the village of Aruna Chapori. A member of Assam’s indigenous Mising tribe, Payeng is better known as the “Forest Man” for spending the last 35 years planting a forest bigger than New York City’s Central Park.