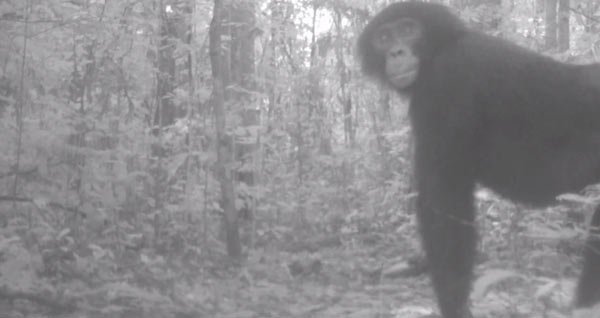 Bonobos, our ape cousins, love peace. Unlike chimpanzees, also our close relatives, bonobos are known to resolve conflict through sex instead of aggression. They kiss, they caress, and females display genito-genital rubbing (also called G-G rubbing) to communicate, bond, and reconcile.

But capturing these elusive and endangered apes on camera is not easy.

In the north of the TL2 landscape in the Democratic Republic of Congo, named after the three large rivers it encompasses, Tshuapa – Lomami – Lualaba (from west to east), researchers from the Lukuru Wildlife Research Foundation set up several camera traps between April and July 2014, and recovered some rare footage.

In one of the videos, bonobos screech loudly, and run about. One female bonobo even kicks and displays her anger towards another female bonobo.

“We are getting some of the first ever wild footage of bonobos living as they normally do without any interference from humans or presence of humans,” Jo Thompson, bonobo-expert and President of the Lukuru Wildlife Research Foundation, told mongabay.com.

Based on what the video footage shows, Thompson deduced that the bout of aggression could be a tumescent female bonobo (bonobo with a genital swelling that signals receptivity to mating), charging an anestrus female (bonobo with a flaccid genitalia).

“Just given social dynamics, the tumescent female would be considered ‘attractive’ in that phase, while the anestrus female is not,” Thompson said. “But…without knowing the individuals or their hierarchical relationship, I can only respond to what I see.”

The video also features a mother and a child, and ends with a bonobo quickly running across the camera with a tree branch, possibly an excited adolescent male, according to Thompson.

In another part of DR Congo, south of the TL2 landscape, a bonobo was spooked by a camera.

These camera traps are part of an extensive wildlife monitoring survey in the TL2 landscape initiated by Terese Hart and her husband, John Hart, in 2007. Some other camera trap videos featuring African forest elephants, Congo peacocks, and the lesula, a monkey recently discovered by the Lakuru team and known only from the TL2 landscape in DR Congo, can be viewed on their website. In fact, a leopard attempts to click a selfie too.