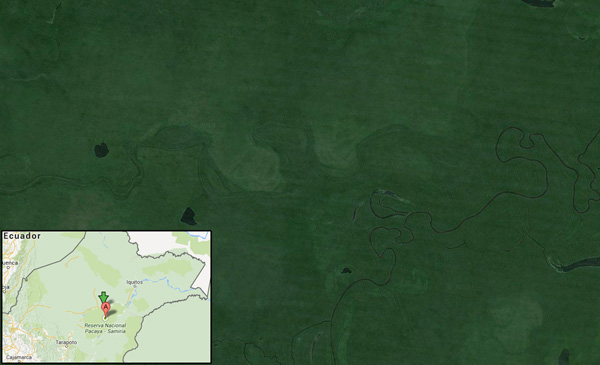 Google Earth image showing a portion of the Pastaza-Marañón peatland

Peatlands in the Peruvian Amazon store ten times the amount of carbon as undisturbed rainforest in adjacent areas, making them critical in the battle to fight climate change, finds a new study published in Environmental Research Letters.

While peatlands in Southeast Asia — namely Sumatra, Borneo, and New Guinea — are best known to tropical ecologists, they are also found in other parts of the world, including the Amazon. The new research looks specifically at an area known as the Pastaza-Marañón foreland basin (PMFB), which lies in northwest Peru.

Using field data and satellite imagery, the international team of researchers assessed the extent and carbon storage in the basin. They found that the Pastaza-Marañón peatland covers some 36,000 square kilometers — an area the size of Taiwan — and stores 3.1 billion tons of carbon, or half of Peru’s aboveground forest carbon stock. More than two-thirds of that carbon is found within the area’s palm swamps, but so-called “pole forests” are the champions of carbon storage on per-unit-area basis, averaging nearly 1,400 metric tons of carbon per hectare. That’s more than ten times what a recent survey found in nearby primary rainforests.

The area’s high carbon density is a product of climate and geology, which create conditions that promote peat formation, sometimes to a depth of 7.5 meters.

“Ordinarily in tropical forests, the vast majority of carbon is emitted back to the atmosphere as carbon dioxide, as trees die and decompose,” explained lead author Freddie Draper, a researcher at the University of Leeds. “However, waterlogging in peatlands means that decomposition is very slow so the carbon accumulates as peat.” 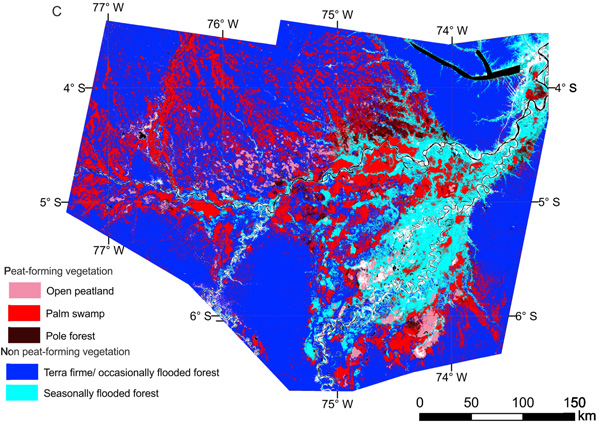 The findings reveal the importance of the region — which covers only three percent of Peru’s forestlands — in fighting climate change. Were that area to be deforested, drained, or destabilized by environmental changes, it could result in massive carbon emissions. The authors note that despite the area’s significance, it is mostly unprotected.

“However, most of the peatland area, including the most carbon-dense peatland type, currently lies outside of the protected areas and threats are increasing. If these carbon-rich forests could be protected too, then large emissions of carbon to the atmosphere could be prevented,” said study co-author Katherine Roucoux of the University of St Andrews in a statement. “The peatlands we studied are largely intact, in contrast to tropical peatlands in South East Asia that have been exposed to decades of destruction, leading to huge carbon emissions and biodiversity losses.”

A 2009 study published in Science estimated that old growth forests in the Amazon store roughly 120 billion tons of carbon in their vegetation. Other research has warned that emissions from deforestation in the Amazon on a per-unit-area basis are likely to increase as loggers and ranchers move from the drier fringes of the world’s largest rainforest into denser forest areas.