South Africa has surpassed last year’s grisly record for slaughtered rhinos—1,004—more than a month before the year ends. In an announcement on November 20th, the South African Department of Environmental Affairs said that 1,020 rhinos had been killed to date. Rhinos are butchered for their horns, which are consumed as curatives in countries like Vietnam and China despite any evidence that rhino horn has medicinal properties.

In its announcement, the Department of Environmental Affairs stressed the government’s new initiatives to combat the poaching scourge.

“South Africa’s multi-disciplinary response further includes the creation of an intensive protection zone within the Kruger National Park, the introduction and implementation of new technology, pro-active intelligence, improving national, regional and international collaboration, and translocating rhino to safe areas within South Africa, and in rhino range states,” the department said in a statement.

While rhino poaching is a problem across many countries in Africa and Asia, its epicenter remains in South Africa. This is, at least partly, because the country is home to the largest population of rhinos in the world. As of 2010, South Africa was home to over 18,000 white rhinos (Ceratotherium simum) and nearly 2,000 black rhinos (Diceros bicornis). In the case of white rhinos, South Africa has over 90 percent of the global population. But the country has also been criticized by some for not doing enough to protect its rhinos and supporting the creation of a legal trade in rhino horns. 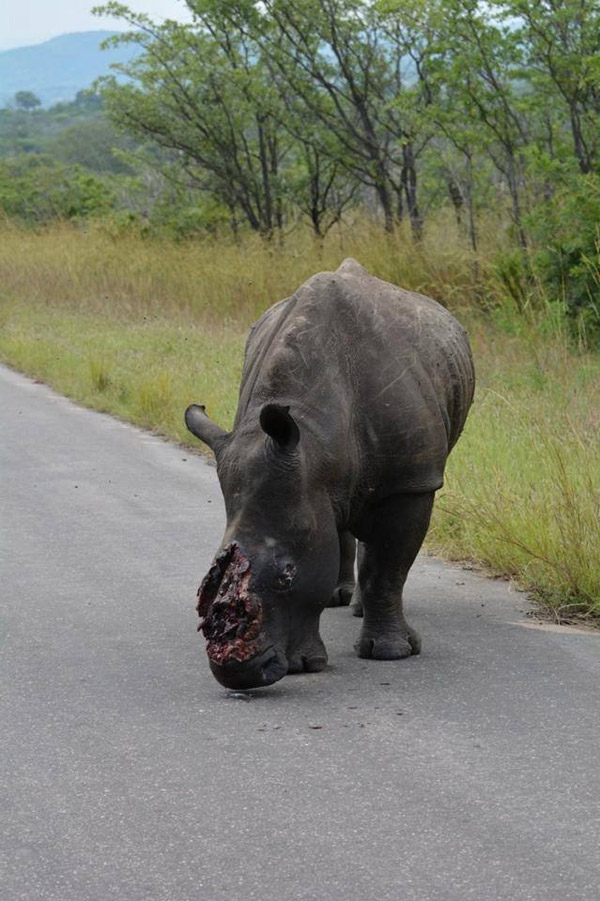 Young rhino whose horn and part of its face cut off by poachers. The animal survived for several days before South African officials found it and put it down. Photo by: Frans Lombard, shared on Facebook.

(10/28/2014) Daily, we read or hear of more rhino being poached to satisfy the seemingly insatiable demand from Asia for rhino horn. With countless articles and papers having been published on the subject – and the Internet abuzz with forums, including heated debates concerning possible solutions – current approaches seem to be failing. Evidence is in the numbers. Known poaching deaths in South Africa have risen sharply over the past three years: 668 rhinos in 2012, 1,004 last year, and 899 through the first nine months of 2014. This toll includes only documented kills — the real number is higher.