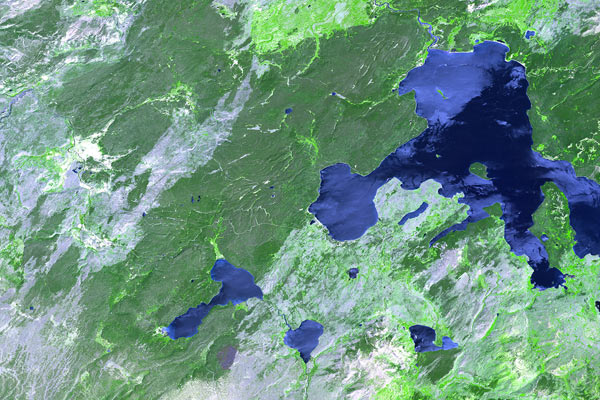 A remote sensing image of Yellowstone National Park, regarded by many as the world’s first national park. WCS, NASA, And other conservation and remote sensing agencies, universities and NGOs are focusing on the top 10 conservation questions for satellite technology, including the monitoring of protected areas from space. Photo by: NASA/GSFC/METI/ERSDAC/JAROS, and U.S./Japan ASTER Science Team.

Remote sensing has changed the way we see our planet. And it has the power to change how we do conservation work, according to a new paper in Conservation Biology. Written by 32 scientists from organizations as diverse as NASA and the Jane Goodall Institute, the paper highlights ten areas where conservation efforts could benefit from remote sensing data.

“Remote sensing data from orbiting satellites have been used to measure, understand, and predict environmental changes since the 1970s, but technology that subsequently became available can now be applied much more widely on a whole range of conservation issues,” explained lead author, Robert Rose, with the Wildlife Conservation Society. “To that end, we sought out the top thought leaders in conservation and the remote sensing community to identify the best conservation applications of these data.”

“The mission of the CRSNet is to increase conservation effectiveness through enhanced integration of remote sensing in research and applications,” the researchers write.

In the paper, the researchers identified ten themes—initially posited as questions—where remote sensing data could be used and expanded to increase conservation efforts in a world threatened with mass extinction and massive ecological changes due to global warming, ocean acidification, and habitat destruction.

(11/17/2014) Field plots in the Amazon are often not representative of the habitats surrounding them, potentially biasing extrapolations made across the region, argues a new paper published in the Proceedings of the National Academy of Sciences (PNAS). The research is based on advanced three-dimensional mapping of forest structure within field plots and in surrounding areas using sensors aboard the Carnegie Airborne Observatory, an airplane-based system.

(10/27/2014) With scientists rapidly adopting and using a range of remote sensing tools for monitoring environmental change, tracking wildlife and measuring biological processes, conservation needs to scale up networking capabilities to maximize the potential of this technological revolution, argues a commentary published in the journal Science.

(10/14/2014) Researchers have created a global map of the world’s forests in the year 1990, enabling accurate comparisons between past and current deforestation rates. The GIS data underpinning the map is available at LandCover.org.