This article is the first in a two-part series that examines deforestation trends and drivers in Assam, India. Read the second part here.

Northeastern India is a distinct entity in many ways. The region is connected to the rest of the country by a narrow strip of Indian land, with a width of just 21 to 40 kilometers (13 to 25 miles). The region has more than 250 indigenous groups that speak a variety of languages. The area is also part of the Eastern Himalaya biodiversity hotspot, one of the megadiverse areas of the world; a meeting ground of temperate east Himalayan flora, the paleo-arctic flora of the Tibetan highlands and wet evergreen flora of Southeast Asia.

The region boasts more than 60 percent forest cover, compared to the 15 percent for India as a whole. However, not all is pristine when one visits areas designated as forest on the map.

“It’s hard to say when you’ve entered a forest in Assam’s Sonitpur district. The green marking on official maps is not what you see on the ground,” writes Jay Mazoomdar, an investigative journalist based in Delhi. Most forests are “open forests,” which means their canopy densities are between 10 and 40 percent. “Dense forests” with canopy densities of 40 percent or higher are relatively rare in northeast India. 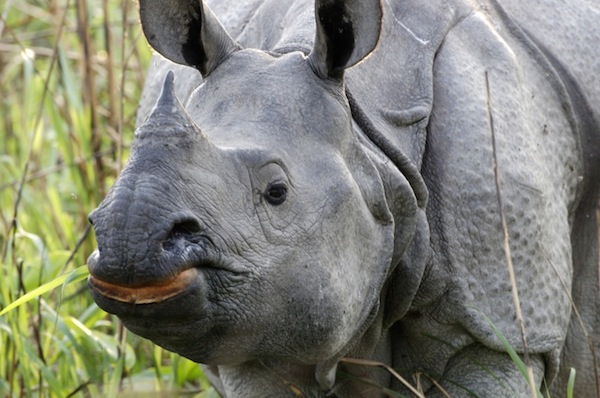 Assam is home to Indian rhinoceroses (Rhinoceros unicornis), among many other species. Photo by Lip Kee.

The practice of shifting cultivation, called “jhum,” is probably one of the reasons why much of the forest is “open.” The practice, common in northeastern India, involves cutting down and/or burning patches of forest to cultivate crops. After the last crops are harvested, the patch is abandoned, or left “fallow,” to allow the natural vegetation, mostly bamboo, to regrow and the soil to regenerate. Previously, the land was allowed to rest for 20 to 30 years; however, with increasing population the interval has been reduced to as little as two to three years.

Unlike the rest of India, forests in northeastern India are predominantly owned by the local communities. In all, there are about 250 ethno-linguistic tribal communities in the region. State forest departments administer reserves and protected areas; however, formally designated protected areas cover less than 8 percent of the region’s forests—despite a rise in land designated as protected areas from 1 percent of the region 1989 to 5 percent in 2006. “Much of this territory remains ‘paper parks,’ in many cases with limited functioning management on the ground,” states a background paper prepared by Community Forest International.

Global Forest Watch (GFW) shows that India as a whole lost about 842,200 hectares of forest between 2001 and 2012. Of this, about 548,440 hectares was lost from northeast India alone. In other words, 65 percent of the country’s forest loss happened in a region that comprises just 7 percent of its land area.

The Kameng Protected Area Complex, including the Sonai Rupai Wildlife Sanctuary in Assam, the Eaglenest and Sessa Sanctuaries in Arunachal Pradesh, and their associated Reserve Forests, encompasses about 3,500 square kilometers, forming the largest contiguous forest tract in the Eastern Himalayas. However, Sonitpur and its surrounding areas have experienced significant deforestation in recent times, linked to the volatile socio-political situation of the region. 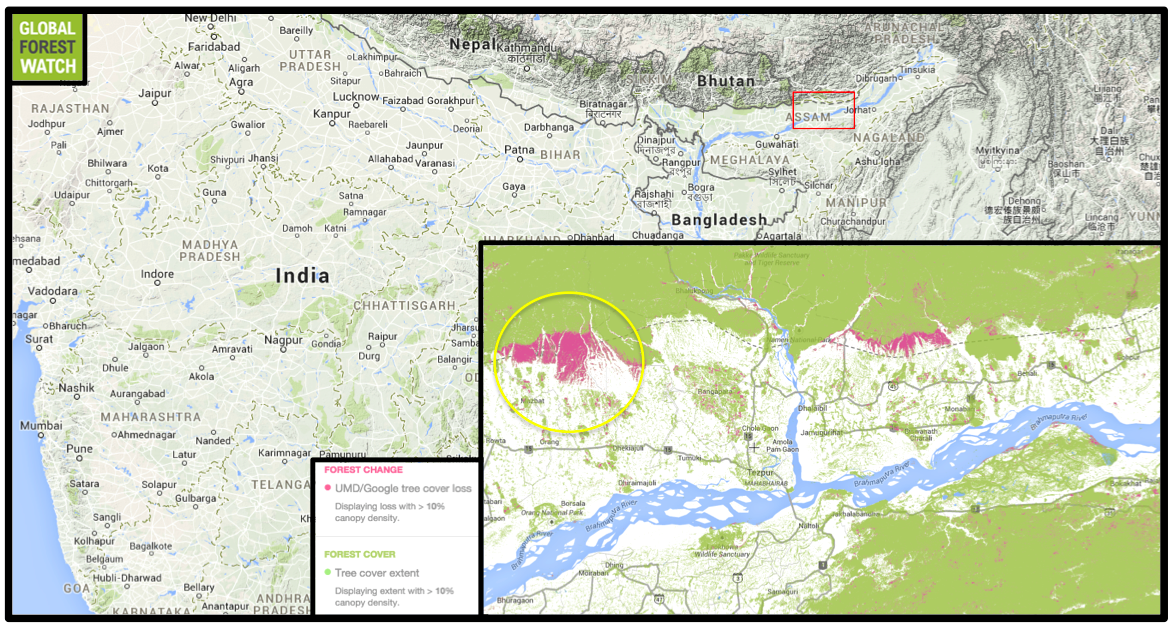 Sonitpur district in Assam and the surrounding region has experienced significant forest loss in some areas. Even protected areas such as Sonai Rupai Wildlife Sanctuary (yellow circle) are not immune. Map courtesy of Global Forest Watch. Click to enlarge. 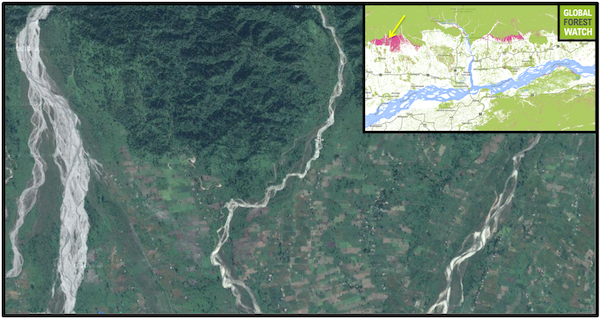 The area encompassing Kameng and Sonitpur elephant reserves was once one of the greenest in Assam, with lowland deciduous forests called “dooars” that are prime habitat for elephants. However, in the 1990s, the Bodos— the largest of the tribes that occupy Assam’s plains—started agitating for a separate “Bodoland.” Since then, Bodos from all over Assam have moved to these areas to increase numbers and ensure a majority.

This has had consequences on the area’s forests, with large-scale encroachment systematically felling the dooars. The kind of animals found in the area consequently underwent a transformation. In the 1990s, Bengal tigers (Panthera tigris tigris)
were a common sight along roadsides in Sonitpur. This implied the forest was relatively undisturbed, with abundant prey for the big cats. However, as people moved into the area, tigers retreated, replaced by species that are more tolerant of human presence. Today, large numbers of Assam macaques (Macaca assamensis) line roadsides, waiting for passing travelers to fling food, mostly crisps and snacks.

In all, approximately 10,870 hectares of forest was lost in and around Sonai Rupai in a little over ten years, according to GFW.