Foreign companies investing in Guyana’s substantial forests are supposed to adhere to national laws and international agreements. But civil society leaders and activists inside and outside the South American country are crying foul, saying foreign corporations and government officials are paying lip service to the accords while quietly building a timber-harvesting empire in the country with few benefits for the average Guyanese.

In 2009 Guyana and Norway signed a landmark pact promising Guyana $250 million over a five-year period to preserve the country’s intact tropical forests and the 1.6 million tons of carbon contained within, according to the Food and Agriculture Organization (FAO). Globally, this was seen as a major stepping stone for REDD, which stands for “reducing emissions from deforestation and forest degradation,” and it helped Guyana’s leaders flesh out a bold Low Carbon Development Strategy (LCDS). “The LCDS really is one of a kind, and it really has been established to set a global model for the world to follow,” said David Singh, vice president of Conservation International Guyana. “It was path finding, and it was meant to contribute significantly to the whole global debate in respect to how can developing countries with intact ecosystems, with intact forests, participate more effectively in the global fight against climate change, while at the same time, ensuring that it develops sustainably.”

He said the move toward carbon-limited development is reflective of Guyanese attitudes: “People do feel quite strongly about environmental protection.”

In size, Guyana is roughly comparable to Ghana, but at 735,000 inhabitants has less than three percent of that country’s population. What Guyana does have a lot of is forest. Trees covered 91 percent of the country in 2000, according to data from Global Forest Watch.

Half of its citizens live abroad, where they’ve sought better opportunities in employment and education outside the small country. That trend has meant little population growth for decades, leaving much of the country undeveloped, including a swath of forest in southern Guyana that is largely contiguous with the Brazilian Amazon. Further protecting the forest is its dearth of marketable tree species – until now.

Rising incomes in India and China have precipitated a spike in the price of rosewood, a type of timber prized for its beauty that is used to make expensive furniture in Asia. As rosewood supplies in Malaysia and Indonesia have become depleted, suppliers have looked elsewhere – increasingly, the tropical forests of Africa and South America, said Janette Bulkan, a Guyanese-born professor in the forestry department at the University of British Columbia. The Chinese company Bai Shan Lin now controls about 1.4 million hectares in Guyana, said Bulkan’s collaborator, John Palmer, a senior associate at the Forest Management Trust based in Gainesville, Florida, who has worked in forestry for more than 50 years. (Guyana’s Commissioner of Forests disputed that figure, saying in a letter to a Guyanese newspaper that the figure is closer to 627,000 hectares.) Palmer and Bulkan said that Bai Shan Lin doesn’t seem to be concerned with following Guyanese laws, nor do Guyanese officials appear eager to enforce them.

“If you implemented these policies, if you implemented the mining law, the state land law, the [Guyanese] Environmental Protection Act, the country would be in enormously better shape,” Palmer said. In reality, however, he said, “It doesn’t happen.” Rather, he suggests that companies like Bai Shan Lin likely pay bribes to key members of the country’s government to turn a blind eye to violations.

For example, Palmer said that Bai Shan Lin has “dubiously” acquired permits or rights to harvest timber in Guyana on more than a million hectares of forest. In some cases, it appears as though Bai Shan Lin has harvested timber by leasing land from other parties through what the forestry commission calls “ venture agreements” – incongruous with Guyana’s anti-“landlording” law. And native title stemming from their centuries-long relationship with the customary lands of native Amerindians should protect where they farm, hunt and fish. When it comes to logging those areas, the law “should prevent issuance of permits without consultation,” said Palmer, “but consultation does not happen.” 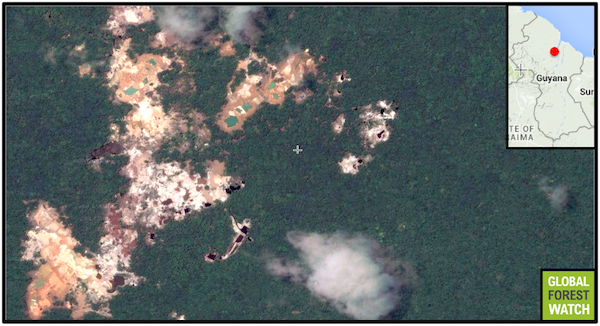 In defense of Bai Shan Lin’s activity in Guyana, the Guyana Forestry Commission published statements and placed editorials in the Guyanese press arguing that the company provides people who live in the forest with the tools to harvest the timber themselves and then sell it to Bai Shan Lin, thereby providing a source of income for forest communities.

For some in Guyana, just the ministry’s defense of a foreign-owned company has been disconcerting. The Transparency Institute of Guyana Inc (TIGI) published a statement, saying that it “finds it particularly troubling that both the Ministry of National Resources and the Guyana Forestry Commission have chosen to defend the operations of these companies with information that appears incomplete and misleading rather than to seek to protect the patrimony of the country.” TIGI has called for more transparency with the issuance of forest concessions in Guyana.

And the benefits to forest communities as a result of a market for timber, especially Guyanese rosewood known as wamara, are marginal at best, Palmer said. “They make very little money,” he said, adding that sellers are paid “just about break-even price.” He said suppliers like Bai Shan Lin stand to make substantially more by getting the unprocessed logs to mills in Asia. In fact, many are concerned that Bai Shan Lin is exporting the whole, round logs directly to China, instead of following through on a promise to build a job-creating processing mill in Guyana.

The Kwakwani Natural Resources Organization, an NGO that works in the region where Bai Shan Lin is operating in Guyana, published a statement that struck a hopeful tone about the economic benefits that foreign investment could bring. But they also acknowledged in the same statement that, “Like most other foreign investors, very little (if anything) is given back to the community from which all their wealth is derived.”

Bai Shan Lin rebutted attacks that the company was hiring only Chinese labor to harvest the timber in a press release, showing that the majority of its workers in Guyana are Guyanese. Anecdotal reports indicate the opposite. Most of the workers seen along a 130-kilometer, Bai Shan Lin-constructed road – itself a point of contention as sources say the company did not carry out a proper environmental and social impact survey – were Chinese. Mongabay.com made repeated requests to speak with a representative of Bai Shan Lin that were not answered.

The road also threatens to open up large areas of intact forest in Guyana to destructive activities in areas that, by most accounts, are bastions of biodiversity and unspoiled wilderness. Hunting is a big concern, and easier access may tempt miners to alter forest and river ecosystems. A logging truck rumbles along a road through Guyana forest. Photo by Jeremy Hance.

Already, deforestation along river ways has been linked to gold and bauxite mining in northern Guyana. Permits for mining are readily available from the government, seen as a route to rapid economic development, Palmer and Bulkan confirmed.

Guyana has seen a steady increase in the amount of forest loss between 2001 and 2012, according to data from Global Forest Watch. Sources said that deforestation often follows the global price for gold: as gold prices rise, mining becomes more profitable and miners cut down more trees to get at a share of Guyana’s cache of alluvial gold tucked in the loose soils around waterways. FORMA alerts, which show areas of likely forest loss in near-real time, have also tracked upward.

Global gold price annual averages compared to deforestation in Guyana. Sources told mongabay.com that recent spikes in deforestation in the country have followed rises in the price of gold, as more miners cut down trees in search of gold. Click to enlarge. 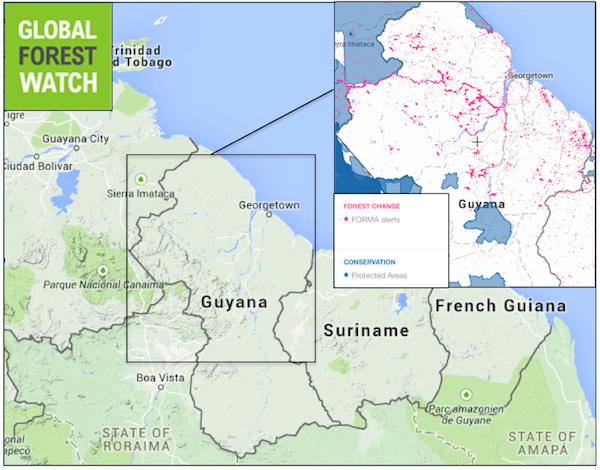 Many of the recent FORMA alerts, the pink spots that indicate areas of likely recent forest loss, in Guyana have been the result of mining, particularly along waterways. In total, Guyana had nearly 11,000 FORMA alerts as of publication. The blue areas show protected wilderness reserves. Map courtesy of Global Forest Watch. Click to enlarge.

Bulkan argues that the deal with Norway in 2009 actually enables transgressions of foreign companies in Guyana, because, in search of expediency, Norway’s Ministry of the Environment has found it easier to deal with a few key figures in Guyana rather than the representative group of citizenry.

“The parliament of Guyana, however flawed, represents the key constituency groups in the country, and to have this parliament marginalized by Norway is simply really bad,” Bulkan said. “If you can’t do good, you should at least do no harm.”

Editor’s note (Jan 18, 2015): The Guyana Forestry Commission issued a complaint in response to these article. We are currently looking into the points raised in the letter and will post any updates as soon as we’re finished with the investigation.