Rhino conservation suffered another tragic setback this weekend with the sudden death of Suni, a male northern white rhinoceros (Ceratotherium simum cottoni) at the Ol Pejeta Conservancy in Kenya. Suni’s passing means there are only six northern white rhinos left in the world, and only one breeding male.

“Consequently the species now stands at the brink of complete extinction, a sorry testament to the greed of the human race,” wrote the Ol Pejeta Conservancy in a statement.

Suni was not killed by poachers like so many rhinos in Africa today, but was found dead in his enclosure. The Ol Pejeta Conservancy will conduct an autopsy to determine the cause of death. Suni was 34-years-old and the first northern white rhino to be born in captivity.

Northern white rhinos once roamed portions of Uganda, Chad, South Sudan, the Central African Republic, and the Democratic Republic of the Congo (DRC). The history of the species has already been one of near-misses. After the devastating rhino poaching crisis of the 1980s, the wild population was reduced to just 15 animals. However, this population eventually doubled, until rhino poaching for horn became rampant again in the mid-2000s. The last known northern white rhinos in the wild disappeared from Garamba National Park in the DRC around 2006. It is believed they were slaughtered by poachers. 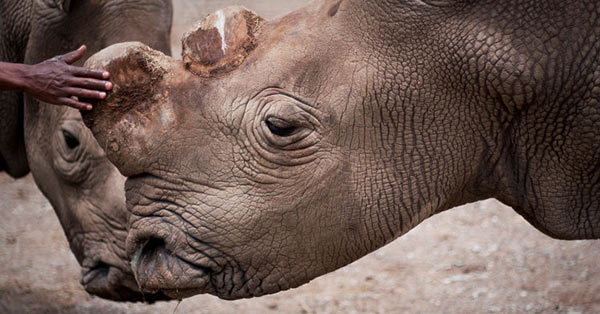 Today there are only six left, all in captivity: two at the San Diego Zoo Safari Park, one at Dvůr Králové Zoo—the only zoo to succeed at breeding the animals—and three in semi-captive conditions at Ol Pejeta Conservancy in Kenya.

“We will continue to do what we can to work with the remaining three animals on Ol Pejeta in the hope that our efforts will one day result in the successful birth of a northern white rhino calf,” said the Conservancy.

Northern white rhinos are generally considered a subspecies of white rhinos, however a 2010 paper argued that the subspecies should be raised to species level due to physical and genetic differences. The study has proven controversial and some conservationists suggest it might be best to breed the northern white rhinos with the southern subspecies in order to preserve at least a portion of their genetics.

White rhinos (Ceratotherium simum) remain the most populous on the planet with an estimated 20,000 individuals. However, they have also taken the biggest brunt of the current poaching crisis for rhino horns given their relative abundance.

As to the world’s other rhino species, two are on the brink of extinction. Only 58 Javan rhinos (Rhinoceros sondaicus) survive in a single protected area in Java, while the Sumatran rhino (Dicerorhinus sumatrensis) may be down to fewer than 100 individuals—and may be the world’s most imperiled rhino species given that its populations are highly-fragmented. The population of black rhinos (Diceros bicornis), which live alongside white rhinos in Africa, sits at around 5,000 individuals, while Indian rhinos (Rhinoceros unicornis) are at approximately 2,500.

(07/01/2014) The last of Indonesia’s critically endangered Javan rhinoceroses have survived poachers, rapid deforestation and life in the shadow of one of the archipelago’s most active volcanoes. But an invasive plant is now posing a new threat to the world’s rarest species of rhino.