by Morgan Erickson-Davis on 1 October 2014

No longer able to find sea ice, walruses turn to land to rest, breed, give birth

A mass of thousands of walruses were spotted hauled up on land in northwest Alaska during NOAA aerial surveys earlier this week. An estimated 35,000 occupied a single beach – a record number illustrating a trend in an unnatural behavior scientists say is due to global warming.

Walruses (Odobenus rosmarus)—iconic arctic mammals that are only distantly related to seals—traditionally use sea ice to rest, breed, and give birth, and as a vantage from which to spot mollusks and other food sources. However, as their habitat warms and sea ice melts, walruses are forced to come to land more often and in greater numbers. 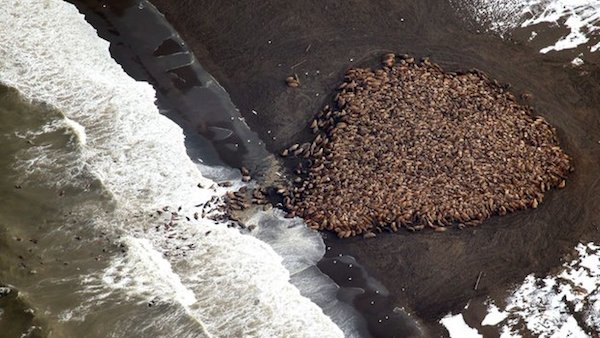 Tens of thousands of walruses assemble on a beach near Point Lay, Alaska. Photo by NOAA.

This latest mass of walruses was found during NOAA’s annual arctic marine mammal aerial survey. Previous surveys also found large groups, with 30,000 spotted in 2011. The behavior is something of a new trend, with the first large-scale land haulout observed in 2007 near where the walruses congregated last week.

“Large walrus haulouts along the Alaskan coasts in the northeastern Chukchi Sea are a relatively new phenomenon,” Megan Ferguson, marine mammal scientist with NOAA Fisheries, said in a 2013 statement.

Little is known scientifically about walrus populations and the health of the species in the Pacific. However, Atlantic walruses were heavily exploited by sealers in the eighteenth and nineteenth centuries—nearly leading to local extinction. Commercial walrus harvesting is now illegal throughout their range, which is somewhat circumpolar, extending from eastern Canada through parts of the Russian arctic to Alaska. However, moderated hunting is allowed to persist, with between 4,000 and 7,000 Pacific walruses harvested per year throughout the 1990s. It is unclear what effect, if any, this hunting is having on the species since it is listed as Knowledge Deficient by the IUCN.

Another, likely greater, threat to walruses is global warming. This year, sea ice in the arctic reached one of its lowest points since satellite monitoring began in 1979, and is expected to decline ever-further.

“A nearly ice-free summer is now forecasted to occur as early as 2016,” write the authors of a study published earlier this year in PLOS ONE. “Such large-scale, precipitous environmental changes will be detrimental for many species dependent on sea ice habitats.” 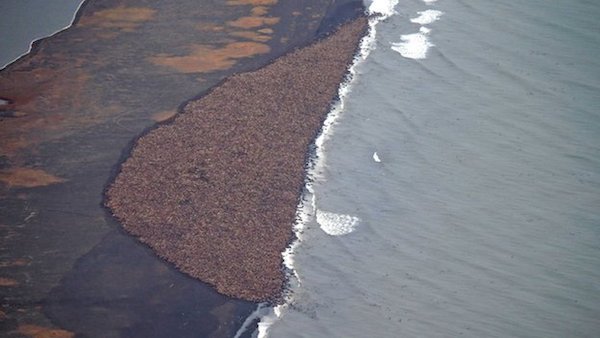 Before sea ice started to melt, large-scale beach haulouts like this were never documented. Photo by NOAA.

One of those sea ice-dependent species is the walrus. As sea ice vanishes, walruses crowd themselves on smaller and smaller fragments, increasing deaths from walrus “stampedes.” Also, walruses that give birth on land often must travel further to find food. Those who give birth on melting sea ice risk losing their pups if the ice collapses. Walrus pups usually stay with their mothers for two years, but a report published in 2006 in Aquatic Mammals tells of an arctic research expedition during which scientists found many pups separated from their mothers.

“We were on a station for 24 hours, and the calves would be swimming around us crying,” Carin Ashjian, a member of the research team, told the Washington Post. “We couldn’t rescue them.”

As the arctic warms, it’s likely this year’s record of 35,000 beached walruses will be trumped in the near future. Other ice-dependent species are also having to alter their behavior to suit a changing world. For instance, polar bears are moving farther inland and shifting their diets as they need sea ice in order to reach seals, their preferred prey.

What this means for these species in the long term isn’t yet clear. But what is becoming increasingly evident is that the arctic of the future will likely look radically different than the arctic of today.

“It’s another remarkable sign of the dramatic environmental conditions changing as the result of sea ice loss,” Margaret Williams, managing director of WWF’s Arctic program, told the India Times. “The walruses are telling us what the polar bears have told us and what many indigenous people have told us in the high Arctic, and that is that the Arctic environment is changing extremely rapidly and it is time for the rest of the world to take notice and also to take action to address the root causes of climate change.”

(07/17/2014) Polar bears are big animals. As the world’s largest land predators, a single male can weigh over a staggering 700 kilograms (about 1,500 pounds). But as impressive as they are, it’s difficult to imagine counting polar bears from space. Still, this is exactly what scientists have done according to a new paper in the open-access journal PLOS ONE.

Revealed for the first time: the surprising biodiversity of algae ‘reefs’

(03/28/2014) Most people are familiar with coral reefs, but very few have ever heard of their algal equivalent – rhodolith beds. Yet, these structures provide crucial habitat for many marine species. In the first study of its kind, published in mongabay.com’s Tropical Conservation Science, researchers unveil just how important these beds are for bottom-dwelling organisms, and the species that depend on them.

(03/13/2014) Yesterday, the European Parliament passed a resolution supporting the creation of an Arctic Sanctuary covering the vast high Arctic around the North Pole, giving official status to an idea that has been pushed by activists for years. Still, the sanctuary has a long road to go before becoming a reality: as Arctic sea ice rapidly declines due to climate change, there has been rising interest from governments and industries to exploit the once inaccessible wilderness for fish and fossil fuels.