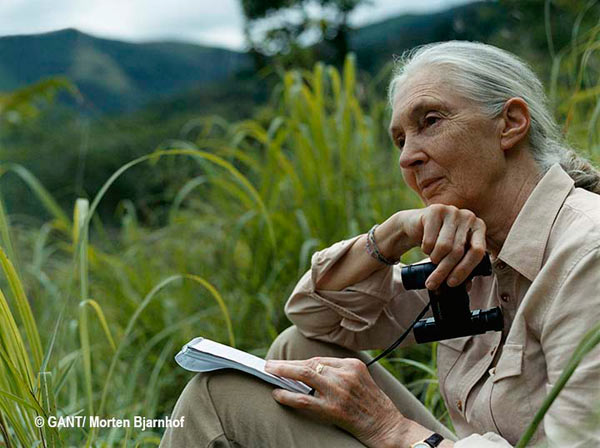 Famed primatologist and conservationist Jane Goodall—whose image is known the world over—has joined the advisory board of mongabay.org. This is the non-profit branch of mongabay.com, an environmental and science website with a special focus on tropical forests.

“I began visiting [Mongabay] when I was researching information for my books, and I soon discovered why it has become one of the most widely read environmental web sites, attracting more than one million people every month,” Goodall said in a letter. “These visitors include conservationists, environmental NGOs, journalists —and even the President of Indonesia who, I discovered, tweets responses to some of the stories published in Mongabay’s popular Indonesian language environmental news service!”

Goodall first came to global prominence at the age of 26 when she set off to Gombe Stream National Park, Tanzania to study chimpanzee behavior. The first and only person to ever be fully accepted into a chimpanzee community, Goodall revolutionized our understanding of our closest relative’s intelligence and evolution by discovering that chimpanzees used tools. Until then, humans were thought to be the only “tool-users” on the planet. Since Goodall’s discovery, many other species have been added to the tool-user list. She also observed and described the violent, even war-like, side of chimp behavior, overturning beliefs that not only were chimps vegetarians, but were wholly peaceable.

Even as she studied her chimps in Tanzania for decades, Goodall became one of the most powerful voices worldwide for conservation efforts. She founded both the Jane Goodall Institute and Roots and Shoots, which gives children worldwide hands-on environmental and humanitarian education. Goodall has also written over two dozen books (including more than ten for children), the most recent being,
Seeds of Hope: Wisdom and Wonder from the World of Plants.

Now a UN Messenger of Peace, Goodall spends the bulk of the year —even at 80—traveling around the world and speaking out for greater conservation efforts, animal rights, and environmental action. Most recently, she joined over 400,000 people marching in New York City for action on global warming.

“Jane Goodall is a conservation legend. She has done so much to raise global awareness about wildlife and environmental issues,” said Rhett Butler, the founder of mongabay.com. “It’s an incredible honor to have Jane join the Mongabay board.”

Butler made the announcement that Goodall would be joining Mongabay over the weekend at an event to celebrate the site’s 15th anniversary. Founded in 1999 as an informational site on tropical forests, today Mongabay houses a widely-read environmental news service including stories from correspondents around the world. In addition, the site has a special section for children available in nearly 30 languages and is home to tens-of-thousands of photos from around the world.

In 2012, Butler founded a non-profit branch of Mongabay, focusing on funding reporters and developing educational programs. During the same time, Butler along with a staff of Indonesians, founded Mongabay-Indonesia, which reports on conservation issues in the country in the local language.

For his efforts to disseminate information on tropical forests and the current environment problems, Butler was recently awarded the Parker/Gentry Award by Chicago’s Field Museum.

“Mongabay.com has always had special concern for the rainforests of the world,” noted Goodall. “The destruction of these forests is one of the most devastating harms we have inflicted on our planet, causing the loss of biodiversity, spread of the desert, diminishing supplies of fresh water, and profoundly influencing exacerbating climate change.”

She added, “I continue to monitor mongabay.com so that I can keep abreast of what is going on in the conservation world. It is immensely useful to me, as it is to thousands of others, as while we seek to create greater awareness about the harm we are inflicting on the planet, and ways in which people can help.”

Jane Goodall renews her faith in nature and humanity during the “Gombe 50” anniversary, An interview with Dr. Jane Goodall

(04/12/2010) 2010 marks a monumental milestone for the Jane Goodall Institute (JGI) and its founder, Dr. Jane Goodall, DBE. Fifty years ago, Goodall, who is today a world-renowned global conservation leader, first set foot on the shores of Lake Tanganyika, in what is now Tanzania’s Gombe National Park. The chimpanzee behavioral research she pioneered at Gombe has produced a wealth of scientific discovery, and her vision has expanded into a global mission ‘to empower people to make a difference for all living things.’ Time, however, has not stood still for Gombe. The wild chimps of the area have suffered as the local human population has swelled. Gombe National Park is now a forest fragment, a 35-square-kilometer island of habitat isolated in a sea of subsistence farming. Because the problems facing Gombe—unsustainable land practices, overpopulation, and a cycle of poverty—are typical of many other areas, lessons learned by Dr. Goodall and her team provide valuable insights for solutions at Gombe and beyond.

(09/03/2014) The Field Museum has honored Rhett A. Butler, the founder of mongabay.com, with this year’s prestigious Parker/Gentry Award. The award is giving annually to an ‘individual, team or organization whose efforts have had a significant impact on preserving the world’s rich natural heritage and whose actions can serve as a model to others,’ according to the museum.