Amazon rainforest is getting drier, confirms another study 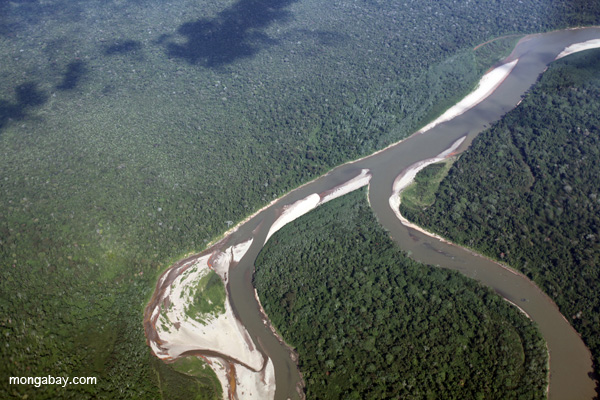 Parts of the Amazon rainforest are getting considerably less rain, leading trees to absorb less carbon, finds a study published this week in the journal Proceedings of the National Academy of Sciences.

The research is based on new satellite technology that measures rainfall more accurately than previous approaches by cutting through cloud cover. It finds that since 2000, rainfall has declined across 69 percent of the Amazon rainforest, an area amounting to 5.4 million square kilometers. The fall in precipitation is even more substantial in the region’s tropical savannas: 80 percent of those areas have experience declining rainfall.

The drop is precipitation accounts for more than half the region’s decline in “greenness” as measured by the normalized difference vegetation index (NDVI). That translates to a drop in photosynthetic activity, meaning that carbon uptake by Amazon trees is slowing.

The findings, which are consistent with a spate of other studies using different methodologies, suggest that the Amazon rainforest may be becoming less resilient to the effects of climate change. That is a worrying prospect given the importance of the Amazon as a carbon sink as well as the ecosystem’s role in generating regional rainfall: as much as 70 percent of South America’s GDP is produced in areas fed by precipitation from the Amazon.

The authors warn that should the warming trend continue, it could trigger a positive feedback loop, shifting the intertropical convergence zone (ITCZ) — a band that circles the planet and drives current rainfall patterns — toward the poles, increasing drying in the region. That in turn would exacerbate die-off, spurring increased emissions and further accelerating climate change.

“Our results provide evidence that persistent drying could degrade Amazonian forest canopies, which would have cascading effects on global carbon and climate dynamics,” write the authors.

CITATION: Thomas Hilker et al (2014). Vegetation dynamics and rainfall sensitivity of the Amazon. Proceedings of the National Academy of Sciences.

(02/06/2014) New research published in Nature adds further evidence to the argument that drought and fire are reducing the Amazon’s ability to store carbon, raising concerns that Earth’s largest rainforest could tip from a carbon sink to a carbon source.

Amazon rainforest does not ‘green up’ during the dry season

(02/06/2014) Analysis of satellite imagery has cleared up a controversy over whether the Amazon rainforest ‘greens up’ during the dry season.

(05/14/2013) The Amazon River’s hydrological cycle has become more extreme over the past two decades with increasing seasonal precipitation across much of the basin despite drier conditions in the southern parts of Earth’s largest rainforest, finds a new study published in Geophysical Research Letters. The research analyzed monthly Amazon River discharge at Óbidos, a point that drains 77 percent of the Amazon Basin, and compared it with regional precipitation patterns.

(02/01/2013) The rate of tree mortality in the Amazon rainforest due to storm damage and drought is 9-17 percent higher than conventionally believed, reports a study published in the Proceedings of the National Academy of Sciences (PNAS).