35,000 elephants killed in Africa in 2012 for black market ivory trade

A joint force of the Wildlife Conservation Society (WCS) and government authorities are in the midst of carrying out a series of raids against poachers in Mozambique aimed at halting the illegal killing of elephants in Niassa National Reserve, the country’s largest protected area. Six men, thought to be responsible for killing 39 elephants in 2014, were arrested in an early morning bust in the town of Marrupa, just south of the park.

“This is a big problem that has spread throughout Africa,” said Cristián Samper, president and CEO of WCS, who is currently in Mozambique. Recent studies found that around 35,000 elephants were killed on the continent in 2012, about four every hour, to satiate the illicit-but-profitable global ivory trade. The forest species (Loxodonta cyclotis) that inhabits the rainforests of the Congo Basin has been particularly hard hit – its numbers have declined by 72 percent in the last decade. 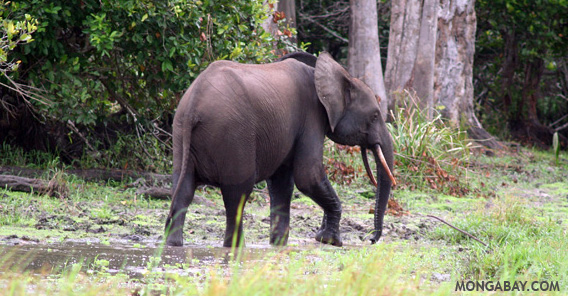 Lesser-known than their savannah cousins, a genetics study in 2010 found that forest elephants (Loxodonta cyclotis) are a distinct species, as far removed from savannah elephants as Asian elephants are from mammoths. Photo by Rhett A. Butler.

To bring the continent-wide poaching problem under control, WCS is part of a team of 17 conservation groups working in concert to fight poaching on multiple fronts. “Our approach to the broader issue is a three-prong strategy,” Samper said. “Stop the killing, stop the trafficking, stop the demand.”

The current series of raids is focused on the first aspect of that strategy – to end the immediate deaths of so many elephants. This week’s success is possible thanks to a “hugely significant change in the government’s commitment” to end poaching, said Alastair Nelson, country director for WCS in Mozambique.

A law passed in June of this year aims to protect not just elephants but all of Mozambique’s biodiversity. The new regulations are a response to protect wildlife as a resource that helps contribute to the quarter of a billion U.S. dollars brought in annually by the Mozambican tourism industry. Mozambique’s leaders have also been pressured by their neighbors, South Africa and Tanzania, as well as the World Bank, the U.S., and France, to rein in the country’s poaching problems, Nelson said.

But he was quick to add that there is also a resolve at the highest levels of government to see the law succeed. After Sunday’s raid, “A government minister called the park warden and said, ‘You must use this law to prosecute these guys,’” Nelson said. It makes poaching a punishable crime, he added, meaning that the men captured in the raid could go to prison for eight to twelve years. The government also sent 12 newly trained environmental police to Niassa, which is larger than Switzerland at 42,000 square kilometers.

In addition to the arrests on Sunday, authorities also confiscated two hunting rifles, 60 rounds of ammunition, and 12 tusks, worth more than $150,000. 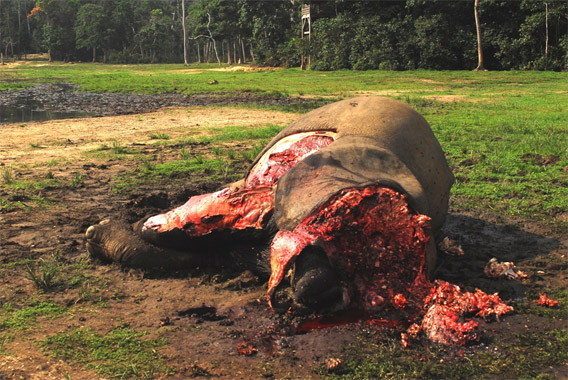 A dead forest elephant with its tusks removed by ivory poachers. Photo by: Andrea Turkalo/WCS.

In the past few years, WCS staff, who run the park jointly with the Mozambican government, say they have noticed a shift in the tactics of poachers.

“This is not just a marginal issue in one place with local communities trying to make a living,” Samper told mongabay.com. “This is very clearly an issue that’s being driven by organized crime and fueled by the demand for ivory” in Asia and the United States, he said.

That worldwide demand has made the ivory trade very lucrative, and criminals have developed highly structured networks that cross international borders. Indeed, four of the six men arrested in the Marrupa raid were citizens of Tanzania, into which Nelson and his colleagues believe the trafficking network extends to move the ivory up to the Kenyan port of Mombasa. Then, it’s smuggled to black markets around the globe.

To combat the killing of elephants for their ivory, the authorities have begun gathering intelligence to track down and ultimately prosecute poachers. A year of detective work allowed the arrest of the men in Marrupa.

“They are a professional poaching gang who are very good at their job,” Nelson explained. “Meeting them in the field, typically when they are armed with these two hunting rifles and an AK[-47] or two, it’s far harder to apprehend them than in an intelligence-led raid like this.” He said it’s important for authorities to evolve as poaching strategies change. 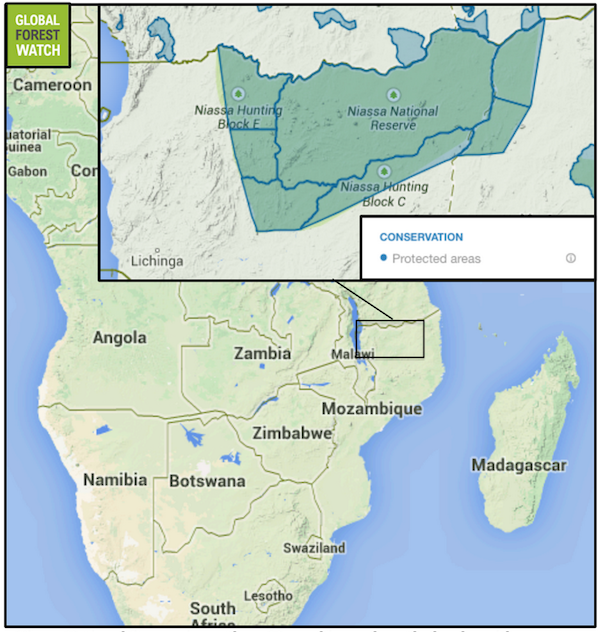 Niassa National Reserve in northern Mozambique, along the border with Tanzania. The reserve covers 42,000 square kilometers, larger than the Netherlands. Map courtesy of Global Forest Watch. Click to enlarge.

Samper said he’s been struck by conflicting emotions on his visit to Niassa. On the one hand, he expresses his sadness at seeing elephant “carcass after carcass” during helicopter surveys of the reserve. Poachers pick off one to two elephants every day in the park, WCS believes.

But he’s also heartened by the success of the raids, as well as the lessons from history about the resiliency of these animals. “We’ve been here before,” Samper said. Elephant populations plummeted in the 1980s, before international regulations stymied the international ivory trade.

Once those laws were enforced, “The populations of elephants recovered,” he said. “We know that this can be done in the places where we have resources and people. We know that the elephant populations can recover relatively quickly, and that’s what will happen if we all really focus on doing this and the kind of work we’re doing in Niassa.”