Crackling heat and thick billowing smoke raced across the landscape. After weeks of scorching dry summer weather, the wildfire seemed to hungrily consume the earth. In northern Alberta, Canada, the Richardson fire of 2011 gained particular notoriety for ravaging nearly 700,000 hectares – and threatening the Athabasca oil sand development. Yet it is these very wildfires that are so crucial in shaping our boreal forests – which make up nearly one third of the world’s forests.

Boreal forests form a verdant belt around the earth’s arctic latitudes, dominated by stands of spruce, pine and fir. Speckled with thousands of ponds and lakes, roughly one half of boreal forests are still considered primary forest, never having been disturbed by human intervention. Yet, these forests are not a peaceful land: these are landscapes formed by natural disturbances such as wildfires, wind-storms and insect outbreaks. The steady pattern of destruction works to continually reshape the land, leading to high levels of diversity that would otherwise be lost to a single dominant vegetation type. But these very rhythms of devastation and renewal are beginning to change. 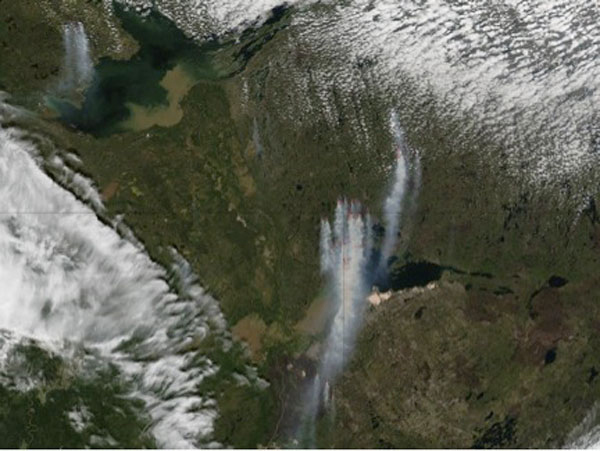 Plumes of smoke blow south towards a patch of blackened earth left by the Richardson fire in 2011. Clusters of wildfires are outlined in red in this image taken by the Moderate Resolution Imaging Spectroradiometer (MODIS). Image courtesy of NASA.

Arctic regions are particularly prone to climate change, with average temperatures increasing almost twice the global rate over the last century. With rising temperatures and increasingly erratic weather patterns, these far-flung forests are facing higher levels of disturbance than ever before. A study published in the Proceedings of the National Academy of Sciences (PNAS) has documented a trend towards increasing drought in the western boreal forest. The Canadian ministry of Natural Resources warns of increasing forest fire intensity and frequency in the northwest boreal region.

With increasing temperatures, boreal forests are expected to shift northwards. But tree species distribution cannot keep up with the northerly march of climate zones – estimated at five kilometers (three miles) per year. As such, entirely new ecosystems will form, with an expected shift towards more deciduous boreal forests. Still as coniferous forests are pushed north, their expansion into current areas of tundra is expected to lag decades, if not centuries, behind.

Increasingly, conservationists are recognizing that the very nature of the land they are conserving will change with climate change. As the climate changes, the concept of managing for uncertainty, while familiar enough to business managers and entrepreneurs, is beginning to gain traction in the fields of resource management. Due to the sheer size of these vast wild-lands and the erratic nature of the forces shaping them, Kim Lisgo and a team of conservation scientists have developed a “made-in-Canada” approach to conservation design. 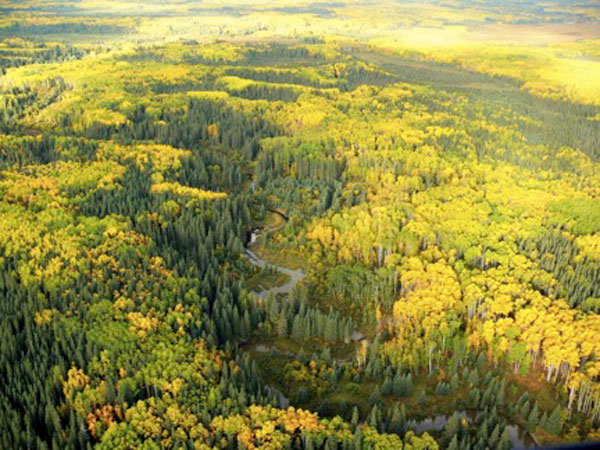 The constant rhythm of disturbance leads to a spectacular patchwork of species diversity seen here in this boreal forest. Image courtesy of M.P. Marklevitz.

“The Conservation Matrix Model developed by the research group BEACONs is a whole landscape approach which recognizes that all elements of the landscape have a role to play in conservation planning,” Lisgo said. The conservation matrix model is a shift towards proactive management of these dynamic landscapes. “Rather than focusing on ‘how much is enough?’ with regards to protection, this model addresses ‘how much is too much?’ with regards to human development.”

The critical change is a move away from optimizing a single parameter, such as the total protected area, towards maintaining functioning ecosystems, which requires a more flexible approach.

“With implementation of adaptive management as a core component, the Conservation Matrix Model allows us to address uncertainty directly by learning while doing and adapting as we learn,” Lisgo said. Central to maintaining a resilient landscape in the face of uncertainty is identifying potential thresholds, or tipping points, whereby a system is changed drastically in such a way as it cannot be easily reversed. The Conservation Matrix Model can be used to test thresholds by constantly comparing the functioning of more developed areas to natural ones within the landscape. The overall ecological functioning of the entire landscape is maintained by adjusting management practices well before a tipping point is reached.

Hidden under Canada’s boreal forests lies a potential global tipping point: huge amounts of carbon trapped in a frozen soil layer known as permafrost. As temperatures rise, the organic matter trapped in these frozen layers begins to decompose, releasing greenhouse gases into the atmosphere. This could lead to a feedback loop, in which rising temperatures fuel more greenhouse gas release – and thus increase temperatures further. This carbon “time-bomb” could lead to accelerating rates of global warming, and an irreversible shift to a hotter, more climatically volatile world. The level of this potential carbon-release tipping point remains uncertain, only increasing the importance of proactive adaptive management approaches. 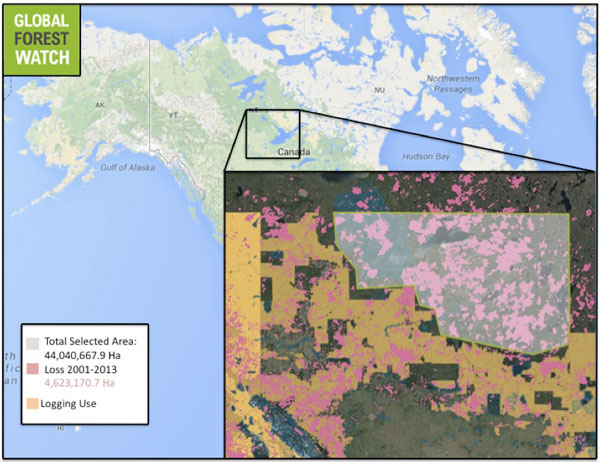 Irregular patterns of forest fires have left their mark on the landscape. Just north of logging concessions in Alberta and Saskatchewan, forest fires burnt 4.6 million hectares between 2001 and 2013. Increasing drought and high temperatures have led to more frequent and destructive forest fires in the past few decades. Image courtesy of Global Forest Watch. Click to enlarge.

To date, elements of the Conservation Matrix Model have been implemented in several areas across Canada.

“At present, we are supporting the Canadian Boreal Forest Agreement (CBFA) and Northwest Boreal Landscape Conservation Cooperative in their efforts to apply the CMM,” Lisgo explains. The CBFA unites groups that have historically been at odds, such as logging interests and environmental advocates, to come together in addressing the needs of a sustainable future for boreal forests.

The key, it seems, is to stay flexible in these changing times.

“The boreal is a very large and diverse region and methods developed for one region may need to be modified to work in another, so we are constantly learning,” Lisgo said.

(09/08/2014) Monarch butterflies were once a common sight throughout the North American heartland. But declines in milkweed – their caterpillars’ only source of food – have led to a 90 percent decline in monarch numbers. Now, the U.S. Fish and Wildlife Service is reviewing a petition that would grant the iconic species protection through the Endangered Species Act.

The last of her kind: centennial of the death of the world’s last passenger pigeon

(09/01/2014) They once numbered in the billions, flying 60 miles per hour in flocks that darkened the sky. But on September 1, 1914, one hundred years ago today, the last member of what may have been the most numerous bird species on the planet died in a cage in the Cincinnati zoo.