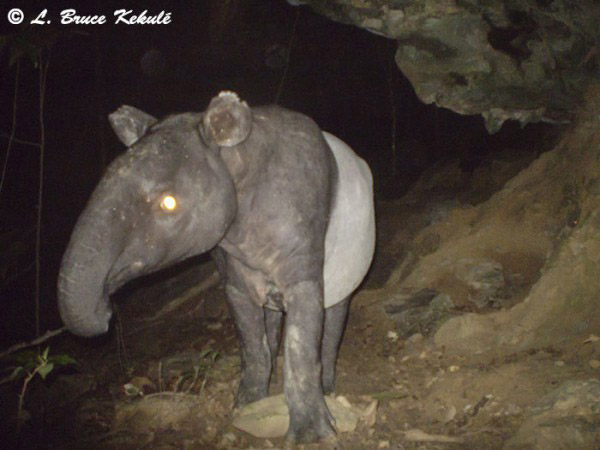 If someone told you there was a place where 200 million year old coral reefs had erupted from beneath the sea and were now draped in the oldest rain forest in the world, a place where marbled cats and clouded leopards prowl the sharp crags and their dark caves in search of dead bats and small prey, would you believe them?

The place is real. Called Khlong Saeng Wildlife Sanctuary, it is located in Surat Thani province in Southern Thailand. Unlike the rest of Mainland Southeast Asia, Southern Thailand is part of the Sunda shelf, an area that was geologically stable for millions of years while the other continents were banging around. The result is that the rainforests in this region existed even back in the last geological era, the Tertiary Period. The glaciers of the Ice Age never covered Khlong Saeng, and those wondrous, imponderable limestone beauties that rise out of Cheow Lan Lake date back to the Permian Era. It is one of the most beautiful places in Southeast Asia, if not the world, and like every other protected area in the region, it is in trouble.

The strangely beautiful limestone outcrops that rise out of the water here are sometimes compared with the striking karsts that are found in Guilin, China. In Mandarin some refer to the Khlong Saeng–Khao Sok region as “xiao Guilin” or “little Guilin.” In fact, the pumice-like crags of China’s Guilin are part of the same ancient coral system as those found in Southern Thailand (which includes those in Phangnga Bay and Krabi province) as well as those in Halong Bay, Vietnam; Vang Vieng, Laos; and Sarawak in Borneo. Taken together, these ancient coral formations stretched a distance five times longer than Australia’s Great Barrier Reef, and those sheer cliffs that seem to have shot up straight out of the water are, by their rugged and inaccessible nature, wildlife’s best protection. 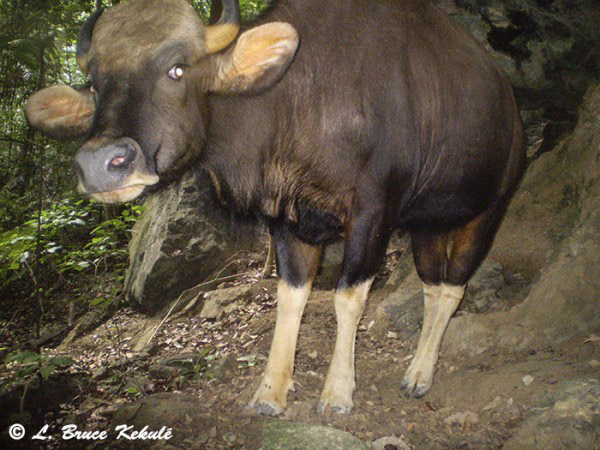 Gaur (Bos gaurus) in the sanctuary. These large bovids are listed as Vulnerable by the IUCN Red List. Photo by: Bruce Kekule.

But while the karst formations of Phangnga Bay to the south rise out of the sea, those in Khlong Saeng jut out of Cheow Lan Lake, which was formed when the Rajabrabha Dam was completed in 1987. Some of the mountains reach nearly 1,000 meters, with the bottom thirds submerged in the lake. Divers have reported finding underwater caves where golden Buddhas contemplate their watery tombs. The lake is also home to snakehead fish, which are endemic to the area, as well as the Critically Endangered giant catfish (Pangasianodon gigas), which have been secretly introduced for breeding purposes. White-bellied sea eagles (Haliaeetus leucogaster), osprey (Pandion haliaetus), and pied hornbills are common avian residents around here, and lucky visitors see Asian elephants (Elephas maximus) come down to the shore in the morning. One could be forgiven for not probing deeper and considering Khlong Saeng a piece of Heaven fallen to Earth.

It is difficult to imagine just what this place was like before the dam was built, and few written accounts (at least in English) survive. What we do know is that the Khlong Saeng River valley once swarmed with tigers, rhinoceros, Siamese crocodiles (it’s difficult to imagine, but huge saltwater crocodiles once lived in the Gulf of Thailand), otters, Gurney’s Pittas, and a long list of others. Species that are still present include: Malayan tapir (Tapirus indicus), Asian elephant, clouded leopard (Neofelis nebulosa), marbled cat (Pardofelis marmorata), leopard (Panthera pardus), sun bear (Ursus malayanus), argus pheasant (Argusianus argus), binturong (Arctictis binturong), gibbons, and many other primates, deer, reptiles, birds, and a few otters. There is a very slight chance that a few wily tigers cling to existence deep inside the park where surveys have never been done, but this is unlikely. It is “game over” for rhinos throughout Thailand (though the last few were killed fairly recently in the 1990s in Kaeng Krachan and Hala-Bala National Parks by a poacher who got about $100 apiece for their horns) and the Gurney’s Pitta and Siamese crocodile have been hunted out. Futhermore, when the dam flooded the many valleys of Khlong Saeng numerous hills and mountains became islands, stranding wildlife such as gibbons and dusky langurs that cannot or will not swim. What’s worse, formally inaccessible areas of the sanctuary are now easily reachable by boat, and poachers can take advantage of this. So, as stunning as it is, Khlong Saeng remains under threat. 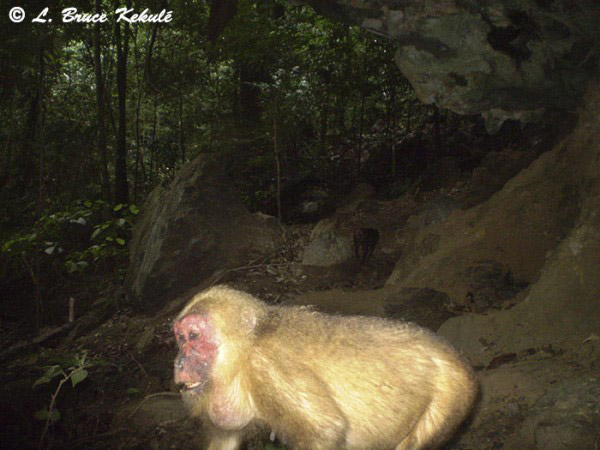 A stump-tailed macaque (Macaca arctoides) in the sanctuary. This primate is listed as Vulnerable. Photo by: Bruce Kekule.

I spent five days in Khlong Saeng in July with veteran wildlife photographer Bruce Kekule to set up some motion-triggered camera-traps deep inside the sanctuary. I brought the cheap but reliable Bushnell Trophy Cams and Bruce came through with the heavy duty DSLR professionals that he made himself. An American by birth, Bruce has lived in Thailand for nearly 50 years, speaks fluent Thai, and may very well be the world’s leading photographer on the rare and elusive black leopard (and yes, we’re hoping to record some videos of them passing our cameras on the various game trails that we scoped out). His books Wild Rivers, and Thailand’s Natural Heritage are classics. Bruce taught me some of the tricks he has learned over the years, such as wrapping sharp rattan vine around the camera-traps to deter elephants from smashing them (elephants don’t like camera-traps!)

It was tough trekking in the jungle with heavy downpours that lasted for hours as we slogged up and slipped down steep mountainsides. Having said that, I think rainforests are even more beautiful in the rain, though it’s probably easier for me to say that because we had some very nice bungalows to retreat to at the end of each day. Each morning we woke to several families of white-handed gibbons belting out their morning calls in the thickly-forested mountains all around us. Someone unfamiliar with gibbons could get the impression that a war party of angry natives was whooping up a battle cry in the hills, or that a group of banshees was howling out a lament for someone recently killed. I have had the pleasure of hearing gibbons at forest camps on many mornings in Southeast Asia and I have never heard anything like what we experienced at Khlong Saeng: the calls came from numerous groups nearby, they were loud, long, included extra varied phrasing, and they sometimes started as early as 4:30 AM!

The gibbons weren’t the only ones making noise in the jungle: every other mountain seemed to have a pair of great hornbills growling out a prehistoric-sounding call and response game (listen to great hornbills doing this in Northeast Cambodia recorded by nature audio expert Adrian Stoeger here: https://soundcloud.com/thefieldrecordist/flight-of-the-great-hornbill ). We watched gibbons and dusky langurs hanging out in the same tree, spotted a group of long-tailed macaques patrolling the shore, saw three barking deer, a wild pig, and a large monitor lizard in the sanctuary. A group of three Swiss tourists had the privilege of seeing a young male elephant emerge from the forest on three consecutive mornings. My friend Dr. Jimmy Chen and I waited in vain for him to appear each morning during our stay. I couldn’t resist asking the Park Rangers if there were any rumors of a wildman in the hills, some sort of Tenasserim Mountain Yeti. Lek, our lead guide, listened to the question with a straight face, pondered it for one second, and replied resolutely: No. I was inspired to ask because I had just read Jeffrey A. McNeely’s classic book Soul of the Tiger, in which he mentions the tua yeua, the wildman of Sai Yok National Park in Western Thailand. Well, at least I asked. 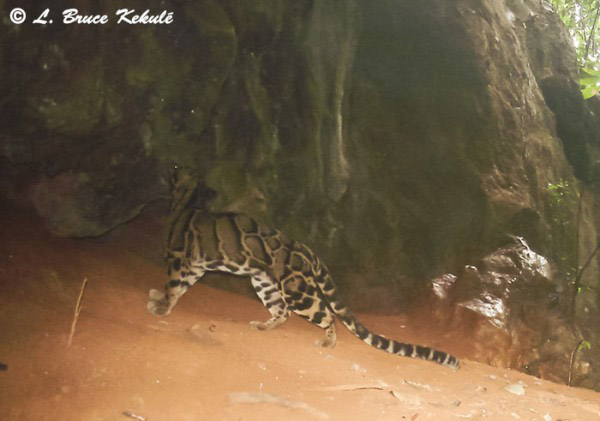 Clouded leopard on camera trap. This medium-sized feline is listed as Vulnerable. Photo by: Bruce Kekule.

Part 2 in this series will be authored by Bruce Kekule in a few months once the memory cards are changed. Stay tuned for some select footage!

Greg McCann is a founder of Habitat ID, and the author of Called Away by a Mountain Spirit. 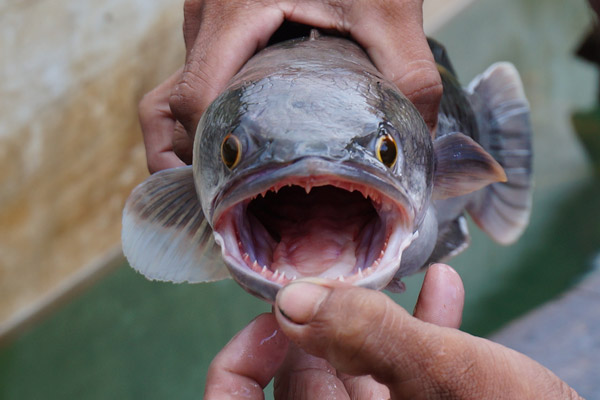 A snakehead fish in the sanctuary. Photo by: Greg McCann. 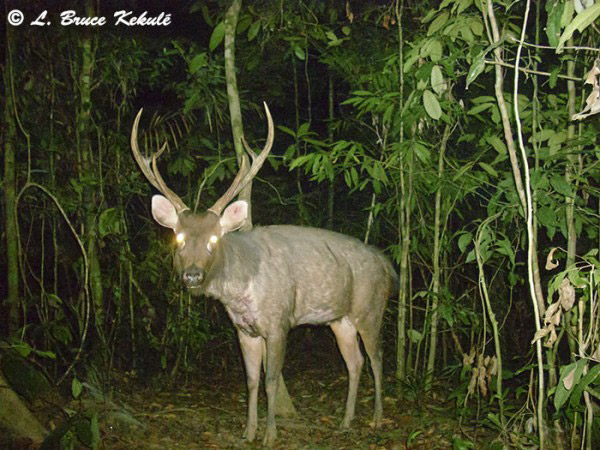 Impressive sambar stag in the sanctuary caught on camera trap. The sambar is also listed as Vulnerable. Photo by: Bruce Kekule. 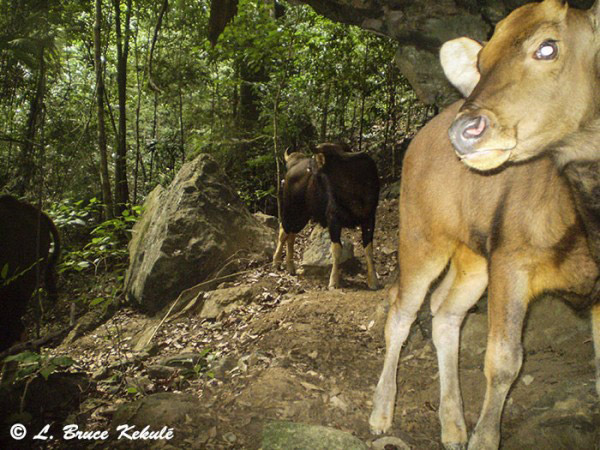 Another guar on camera trap. Photo by: Bruce Kekule. 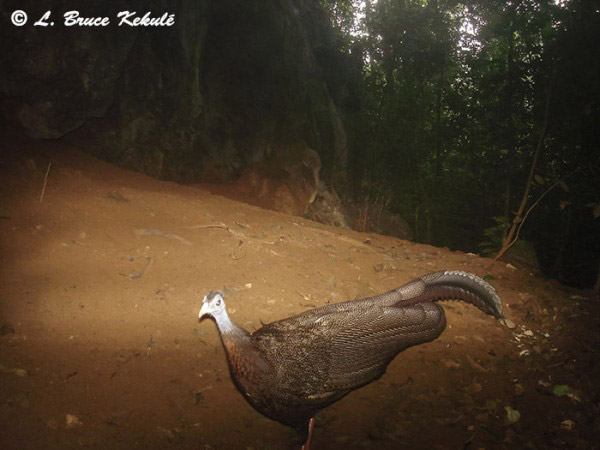 A great argus pheasant. This large bird is listed as Near Threatened. Photo by: Bruce Kekule. 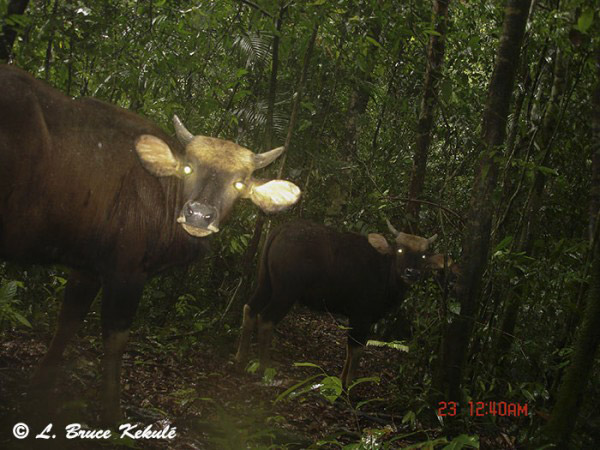 A herd of gaur. Photo by: Bruce Kekule. 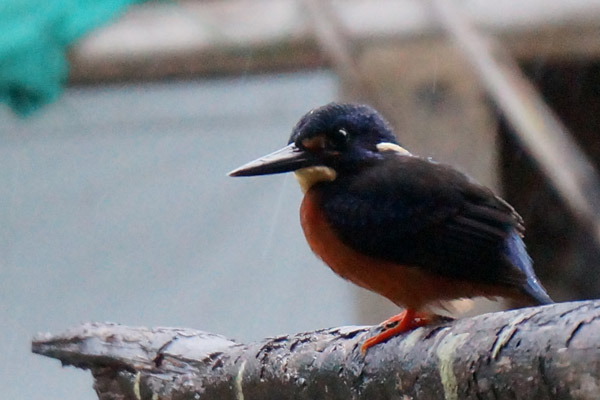 A blue-eared kingfisher (Alcedo meninting) hanging out near camp. This species is not threatened. Photo by: Greg McCann. 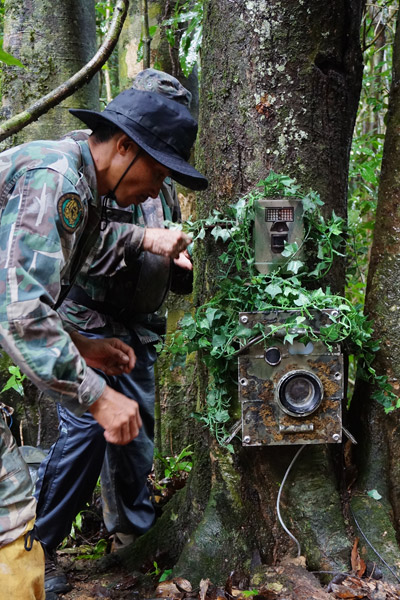 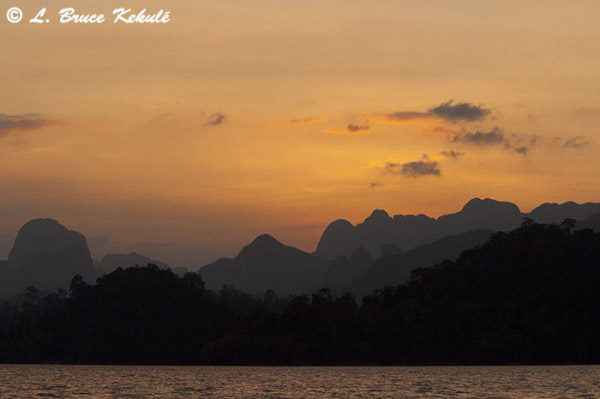 Sunset in the sanctuary. Photo by: Bruce Kekule. 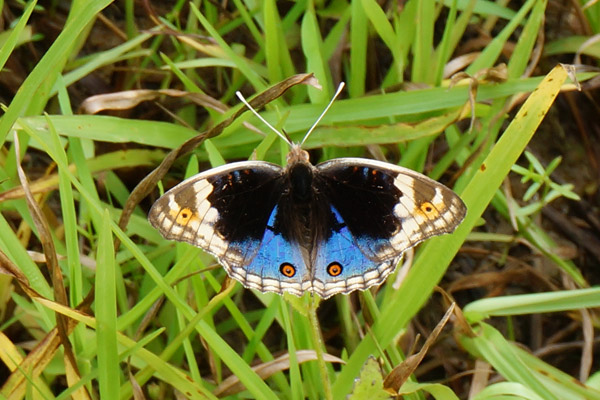 A pansy butterfly in the sanctuary. Photo by: Greg McCann. 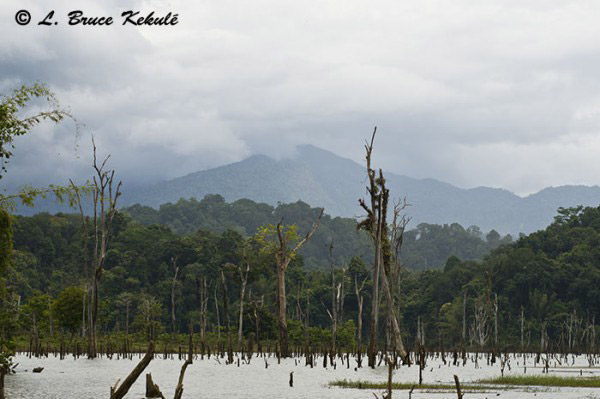 Flooded forest in the sanctuary. Photo by: Bruce Kekule. 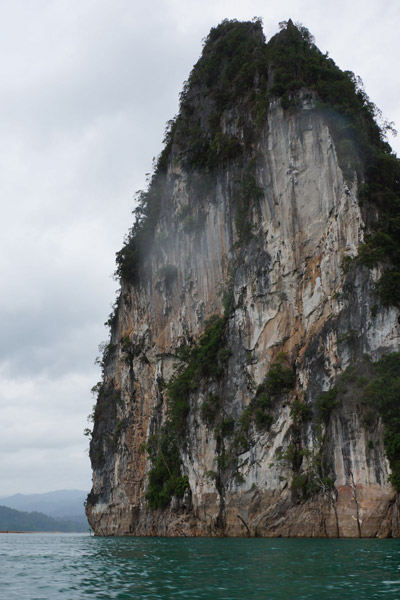 Ancient coral becomes great limestone formations. What might be hiding in those caves? Photo by: Greg McCann. 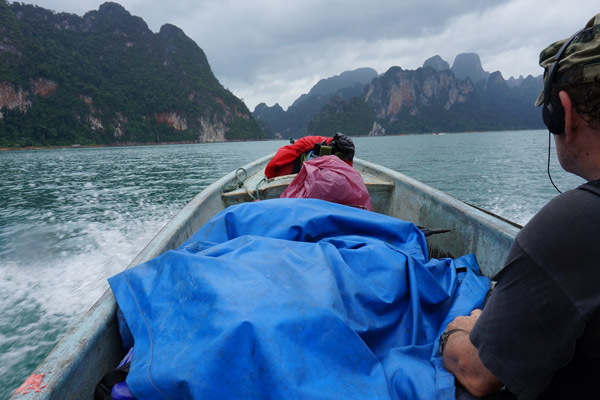 Heading into the flooded sanctuary. Photo by: Greg McCann. 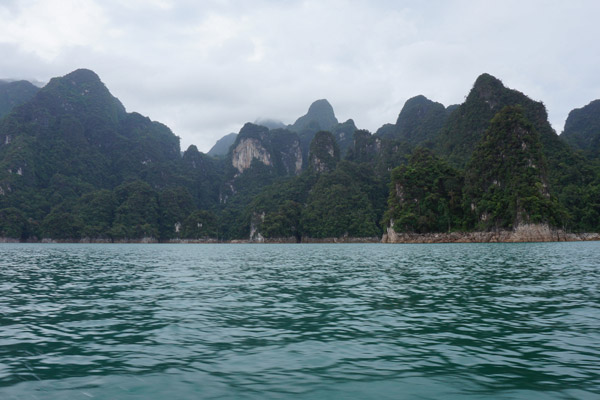 Limestone karsts towering above the lake. Photo by: Greg McCann. 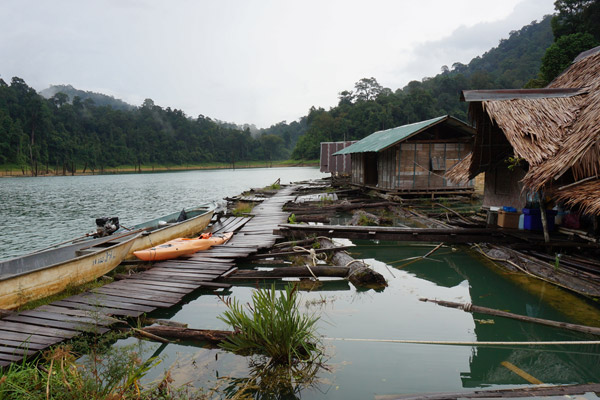 Asia’s most precious wood is soaked in blood

(11/21/2013) Deep in the tropical forests of Southeast Asia grows a rare and beautiful tree whose wood is so highly prized that men will kill to possess it. Wild rosewood, famous since antiquity in China and Japan for its unique, blood-hued luster and intricate grain, was once only used for the finest religious statues and princely ornaments. Now, China’s nouveau riche lust for decorative baubles and furniture made of rosewood as a sign of status leading to a massive surge in demand for this precious timber that shows no signs of abating. In just a few short years the price has skyrocketed from just a hundred dollars a cubic meter to over $50,000 today.

(09/26/2013) As tropical forests worldwide are increasingly cut into smaller and smaller fragments, mammal extinctions may not be far behind, according to a new study in Science. Tracking native smalls mammals in Chiew Larn Reservoir, Thailand for over 25 years, scientists found a stunning and rapid decline in mammal populations, until most forests were almost completely emptied of native mammals.