Can it be stopped? Ghana’s forests ‘could completely disappear in less than 25 years’

Ghana contains forests that are biologically unique and important both for the wildlife they contain and the human communities that depend on them. However, the country is experiencing one of the greatest rates of deforestation in West Africa. At its current rate of forest loss, a study estimates that Ghana could be devoid of major forest cover in less than a quarter-century.

An analysis published in Africa Initiative in January 2013 links deforestation to economic activities such as legal and illicit logging, clearing trees to increase arable land, fuel wood extraction and mining. 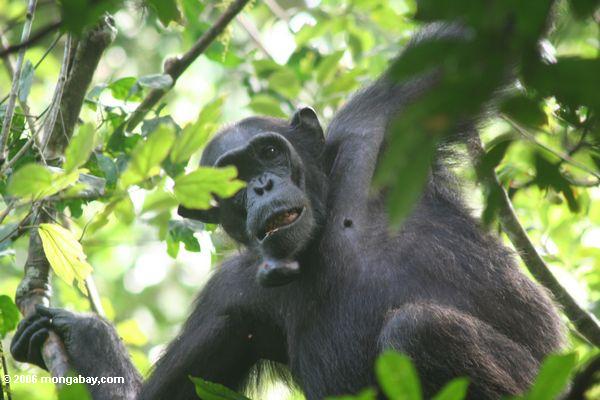 Ghana’s forests are home to many threatened species, including western chimpanzees (Pan troglodytes verus). According to Global Forest Watch, chimpanzee range in Ghana lost approximately 10 percent of its forest cover from 2001 to 2013. This photo is of an eastern chimpanzee (P. t. schweinfurthii) in Uganda, by Rhett A. Butler.

Author James Boafo states that forest resources play an important role in income generation and household food security in Ghana. Non-Timber Forest Products (NTFP) provide sustenance and revenue for about 2.5 million people in the West African nation. However, these resources are threatened by the country’s current rate of deforestation.

“Between 1990 and 2005, Ghana lost over a quarter of its total national forest cover (about 1,931,000 hectares of forest),” Boafo writes in the study. “At the current rate of deforestation, the country’s forests could completely disappear in less than 25 years.”

According to data from Global Forest Watch, the forested portion of Ghana with major tree cover comprises approximately 6.9 million hectares. Of that, more than 500,000 hectares were cleared from 2001 to 2013. In other words, in just over a decade, the country lost more than seven percent of its forests.

Nearly all of Ghana’s forest loss has occurred in the country’s southern region, an area defined by Conservative International as a “biodiversity hotspot” due to its high concentration of species found nowhere else that live under a high level of threat from human disturbance. Ghana contains portions of the Upper Guinean forests, a strip of tropical forest that extends from Guinea to Togo. Because of this, the World Wide Fund for Nature (WWF) lists the Upper Guinean forests as one of its 200 critical regions for conservation, and surveys into the region indicate that Ghana’s portions are among the most unique – and the most degraded. Even in the early 1990s, scientists estimated 80 to 90 percent of the country’s original high canopy forest had been wiped out.

Ultimately, deforestation in Ghana is due to demographic and economic pressures, policy and institutional lapses, increased infrastructural developments and technological advances. A study published in the International Journal of Geomatics and Geosciences in 2014 states that deforestation has been a major environmental issue in the country since the 1930s, specifically attributing its high rate to the disenfranchisement of local people in some areas due to colonialism.

The colonial forest policies of the past, for example, forcefully took forest lands from individual land owners and families,” the authors write. “Those affected by such colonial land policies resorted to exploiting the forest cover indiscriminately.”

In their paper, the authors state forest cover was exploited regardless of the negative effects. Agricultural expansion such as cocoa cultivation (50 percent) and wood harvesting are viewed as the main drivers. Mahogany has also been heavily targeted. According to a study published in the Journal of Basic and Applied Scientific Research in 2011, overexploitation of the country’s mahogany stocks have emptied forests of the species, raising policy concerns about management of forest resources.

The African Development Bank (ADB) describes Ghana’s annual deforestation rate as alarming, and has dedicated some of its resources to stemming it.
“This shift has resulted in significant loss of forest cover and a decline in carbon stocks. The limited alternative livelihood opportunities pose another challenge for members of the community,” the bank states in a report issued December 2013. 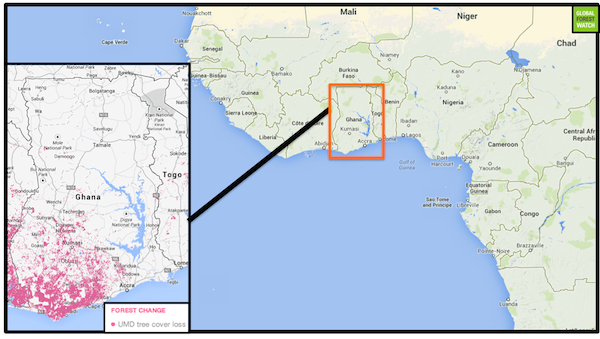 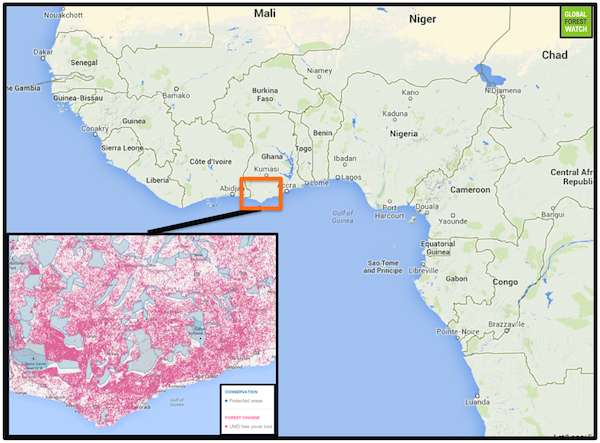 According to Global Forest Watch, the area pictured experienced a 10 percent loss in forest cover between 2001 and 2013. This includes Ghana’s only chimpanzee habitat in the extreme southwestern portion of the country. Map courtesy of Global Forest Watch. Click to enlarge.

Steps in the right direction?

The African Development Bank has been a major financier in the forest sub-sector. Currently, ADB is funding a project geared towards enhancing carbon stocks. It has provided a grant of 9.75 million towards the project’s total cost of $15.8 million. The project approved in November 2013 and is expected to be completed in December 2018. The bank also is an implementing agency for the Forest Investment Program (FIP) for which it secured $42 million for investment projects in Ghana, Burkina Faso and the Democratic Republic of Congo. This project is aimed at increasing resilience to climate change, as well as tackling deforestation and forest degradation problems that currently threaten community livelihoods.

Abdullah Hamza, the Founder and Director of Agrointroductions, an organization focused on mitigating climate change and improving farm productivity, urges the need for civil society organizations to increase participation in assisting the government to sustainably manage their natural resources. The government, he suggests, should cooperate with organizations that seek to utilize concerted efforts to complement its attempts to secure Ghana’s remaining forest. Hamza proposes using commercial forest plantations instead of harvesting trees from wild forests. For agricultural options, he suggests agroforestry – a practice in which crops are grown within forests – may provide alternative strategies to currently unsustainable land use policies. However, even as Hamza offers suggestions, Boafo argues that attempts to address deforestation in Ghana have been hampered by lack of collaboration between stakeholders and policy makers.

“A more effective approach will require integration of sustainable livelihood activities into national forestry policies,” Boafo said. In order to tackle Ghana’s forest loss, Boafo recommends adoption of sustainable livelihood activities as measures towards mitigating the rates and impacts of deforestation on forest communities in Ghana. He also points out that in order to effectively deal with deforestation, the activities of forest-dependent communities must be included in national policy.

Notably, the government of Ghana has been making efforts to address the issue. In 2001it launched the National Forest Plantation Development Programme (NFPDP). According to an annual report, the program resulted in the planting of more than 135,000 hectares of forest from 2001 to 2008 despite criticism that implementation was hampered by lack of funding. In 2009, for the first time in eight years, the government updated the NFPDP with an aim of improving livelihoods through agroforestry.