Report estimates more than 20,000 elephants poached in Africa in 2013

In the first week of June, a huge elephant carcass was found in a swamp in Tsavo East National Park. Its face was mutilated and its tusks were gone, but many who worked in the park thought they knew exactly which elephant it was. After days of searching and hoping they were wrong, park authorities issued a report announcing the death of Satao, the largest elephant in all of Kenya.

Satao was known as a “tusker,” with tusks so long they nearly touched the ground. He had roamed the park for 45 years, a beloved icon of the region and known throughout the country. Officials believe he was killed by poisoned arrows, with his tusks destined for the black market where they could fetch thousands of dollars apiece. African elephant (Loxodonta africana) in the Maasai Mara, Kenya. Satao’s tusks were more than three times the length of this elephant’s. Photo by: Rhett A. Butler.

Satao is just one of the tens of thousands of elephants that will be killed this year by poachers looking for ivory. While illegal, the ivory trade is having a huge impact on elephant populations throughout the world. A new report issued by the Convention on International Trade in Endangered Species of Wild Fauna and Flora (CITES) finds that while there was a small reduction in the number of African elephants (genus Loxodonta) killed by poachers in 2013, the rate is still unsustainable.

Although it looks like bone, ivory is actually made up of a substance called dentine, which is a primary component of mammalian teeth. Historically valued as a carving medium, the demand for ivory ramped up with the manufacturing industry in the 19th century when it was used to make many kinds of goods, from cutlery handles to billiards balls, prior to the advent of plastic. Elephants, with their massively elongated incisors, or tusks, were especially attractive to ivory-hunters. In 1831 alone, demand in the U.K. led to the deaths of nearly 4,000 elephants. In the span of a single decade, from 1979 to 1989, the entire population of African elephants dropped more than 50 percent, from 1.3 million to 600,000. Numbering only around 30,000 and listed as Endangered by the IUCN, Asian elephants (Elephas maximus) were decimated by the ivory trade, and are still being impacted by poaching today.

In response to declines in elephants and other species targeted by the ivory industry such as walruses and narwhals, international trade in the substance was banned by CITES in 1989. However, illegal trade is still rampant. Since the mid-2000s, the number of African elephants poached for their tusks has been increasing, with 2011 holding the record at an estimated 25,000 animals killed. The new CITES report pegs the number for 2013 at less than 2011’s estimate, but not by much – their census places the number poached last year at more than 20,000. 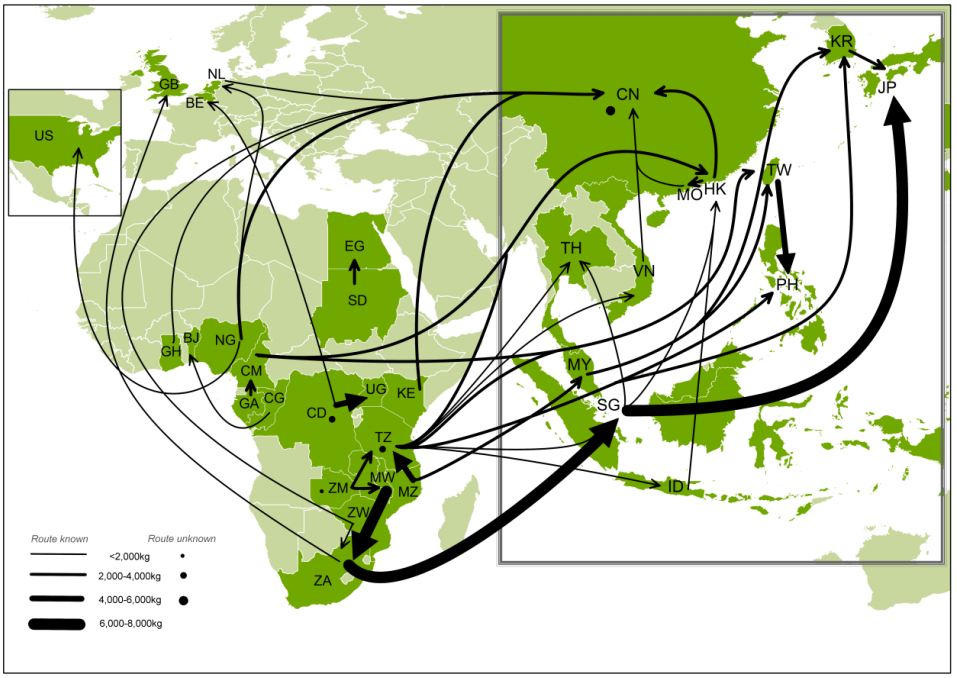 The report lists local poverty, weak enforcement, and international demand as contributing factors to the sustained high rate of poaching.

“Africa’s elephants continue to face an immediate threat to their survival from high-levels of poaching for their ivory and with over 20,000 elephants illegally killed last year the situation remains dire,” said John E. Scanlon, Secretary-General of CITES. “Due to the collective efforts of so many, we also see some encouraging signals, but experience shows that poaching trends can shift dramatically and quickly, especially when transnational organized crime is involved.”

According to the World Wide Fund for Nature (WWF), there are 700,000 African elephants roaming the continent today. While this represents an uptick from the nadir of 600,000 in 1989, it still represents less than 20 percent of the estimated four million animals that existed in the 1930s. The current rate of poaching is reducing the extant population by approximately seven percent every year. With a natural reproductive increase of about five percent per year, poaching alone is killing off elephants faster than new ones can be born. Habitat loss is also affecting many populations, with less than 20 percent of elephant range under formal protection.

The report does include glimmers of hope. In 2013, CITES identified the eight countries that are most heavily involved in the ivory trade – including Kenya, Tanzania, Uganda, China, Malaysia, The Philippines, Thailand, and Vietnam – and began talks with officials about developing and implementing National Ivory Action Plans. The plans would include initiatives such as improved customs monitoring, increased forensics testing, and strengthened anti-poaching legislation, in hopes of stymieing both demand for ivory and access to it.

“We are seeing better law enforcement and demand-reduction efforts across multiple countries, as well as greater political and public attention to this unfolding crisis, and CITES decisions and compliance processes underpin the global effort,” said Scanlon.

“The momentum generated over the past three years must now translate into deeper and stronger efforts to fight these crimes on the front line, where it is needed most – from the field, to Customs, to illicit markets, and only then can we hope to reverse the devastating poaching trends of the past decade.”

(05/21/2014) In Sri Lanka, an underground wildlife racket has been simmering for a while. And a recent incident has brought it to a boil. On the night of May 1st, a gang attempted to kidnap a wild elephant calf out of the Uduwalawe National Park in Sri Lanka. But tipped off by alert villagers, police and wildlife officers foiled the abduction.

(05/17/2014) Hong Kong has begun destroying its 29.6-metric-ton stockpile of confiscated ivory. On Thursday authorities in the semi-autonomous Chinese city crushed and incinerated a ton of seized ivory in an action they hope will send a message to poachers and traffickers.

(05/12/2014) Actor Leonardo DiCaprio has stepped up with a $1 million donation to the Elephant Crisis Fund, an initiative that aims to stop the ivory poaching crisis.